A family for Feleke 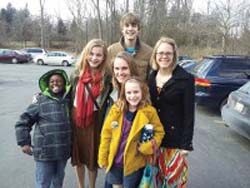 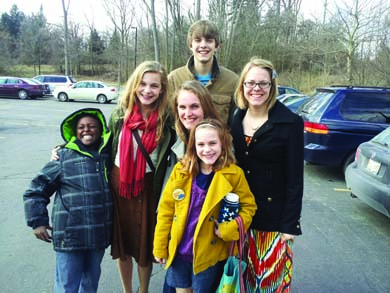 The Logue children with Feleke. (Image courtesy of the Logues.)

Before the lost visas and passports, before the trip to a remote village in Ethiopa, before one father asked another to keep his son on the other side of the world—before all of that, Kyle and Ruth Ann Logue had a conversation.

Ruth Ann knew of an 11-year-old boy in Ethiopia who had been diagnosed with Hodgkin’s lymphoma, a cancer of the immune system. A doctor in Farmington Hills, Mich., had offered him free treatment. A donor had put up money for the plane ticket and, as the Logues understood it, the boy needed a place to stay and transportation to the clinic for about five weeks.

Because the boy had been sick on and off since age five, his father had been forced to sell the family’s two oxen to pay for chemotherapy, but treatments still were stopped early. The boy’s prognosis if he stayed in Ethiopia did not look good. Already the parents of five children, the Logues quickly developed a soft spot in their hearts for the boy, named Feleke (feh-LEH-keh). But a place in their home?

A hope for health

Kyle is the Wade H. and Dores M. McCree Collegiate Professor of Law at the U-M Law School. Ruth Ann is a trained nurse who was home-schooling two of their kids at the time; another was in high school, one was a junior at U-M, and the oldest was a first-year law student at Michigan. They had plenty on their plate.

But maybe, Ruth Ann thought, maybe she could enlist friends to help with the transportation. It would be tough, but for a few weeks, the family could do it.

So, on a bitterly cold night in January 2012, Dr. Rick Hodes, from the mission in Ethiopia where Feleke had been diagnosed, flew with Feleke to Detroit Metro Airport and drove him to Ann Arbor.

Feleke saw snow for the first time that night, amazed by the white blanket that covered the ground. He was terrified of the passing cars on the interstate, fearing the whoosh of wind would blow him into the air.

He couldn’t convey any of this at the time, though. He could only say a few words in English then, so he thought it, silently, in the back seat of the car.

Before long, five weeks stretched to six, seven, 12. The lymphoma had progressed more than the doctors originally thought. Feleke’s return flight to Ethiopia had to be postponed and he missed his family—parents, 10 brothers and sisters—but kept up with them through one of his brothers by cell phone. Through it all, the Logues were awestruck by Feleke’s fortitude and courage, by the maturity he showed. 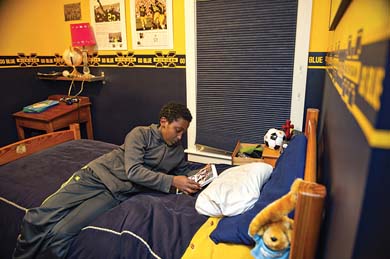 Feleke reads in his bedroom in the Logues’ home. (Image: Leisa Thompson.)

Meanwhile, a network of Ethiopians who live in Ann Arbor brought food, translation help, a dose of the familiar. The Logues’ two youngest children, Mary Claire, now 10, and Caroline, 14, helped Feleke communicate in the early days by getting markers and paper for him to draw his village and his chickens. They, in turn, drew pictures of their family’s house and barn. Thomas, a 16-year-old who plays high school basketball, shared with Feleke his appreciation for U-M sports. Feleke also became close with Hannah, now in her third year at Michigan Law, and Molly, an undergraduate math student at U-M.

At this time, a Logue family friend and U-M medical student, Steven Weinberg, was planning to travel to Ethiopia to work with Dr. Rick Weinberg—the son of Susan Weinberg, a 1988 U-M Law School graduate. Steven offered to reach out to Feleke’s family while he was there. (Indeed, the Weinberg family played a large role in this journey of the Logues and Feleke; Steven had known Dr. Rick for a while, and he helped the Logues to make the decision to host Feleke in the first place. Dr. Neal Weinberg—Steven’s dad and Susan’s husband—is Feleke’s pediatrician.)

Steven arrived in Feleke’s hometown of Dafe Jema with photos of the boy, the Logue family, and America, along with a video of Feleke speaking English (to impress his family) and telling them he was OK. Steven sent back snapshots of Feleke’s family.

He also sent a video that would change the Logues’ lives forever.

The family in Ethiopia was thrilled with how well the treatments were working, and they worried that if Feleke should need treatments in the future, they would not be able to afford or access the care he needed.

“We love Feleke and miss him very much, but we want you to keep him in America…”

“They made their position clear: ‘We love Feleke and miss him very much, but we want you to keep him in America where he can be close to the American doctors and go to an American school, if you are willing to let him live with you,'” Kyle says. 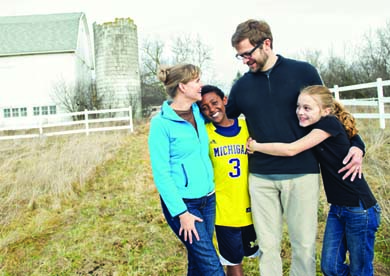 “We sat down with Feleke at the kitchen table and asked him, ‘What do you think about that?'” Ruth Ann says. “I thought he was going to say he didn’t want to stay. I know he missed his family, especially his mom, who was sick and hadn’t seen him for two years before he left Ethiopia. And I told him he wouldn’t be able to get back every year, but we’d get him there as often as possible.

“He looked really thoughtful, and said, ‘Yeah, I want to stay.'”

After an emotional discussion, and a candid confession of concerns all around, the family agreed that Feleke should stay. But Kyle needed to see the Biru Kumbis of Dafe Jema, Ethiopia, to talk face-to-face with Feleke’s parents and ask them: “Are you sure this is what you want?”

The road to Dafe Jema

To get to Dafe Jema, Kyle, son Thomas, and Feleke took a 15-hour plane ride to Addis Ababa, with stopovers in Amsterdam and Khartoum. To make the journey to Dafe Jema the Logue team needed a knowledgeable, experienced, and trustworthy driver. They found one in Shimeless Fisseha, a prominent geophysicist at Addis Ababa University, recommended to them by his sister, Dr. Senait Fisseha, who happens to be a physician at the U-M Hospital and an assistant professor at the Medical School.

They picked up two of Feleke’s older brothers during the drive, one of whom is a police officer in the town of Dera. When their Land Cruiser could no longer cover the rough terrain, the group rode small horses the Biru Kumbis had sent for them. 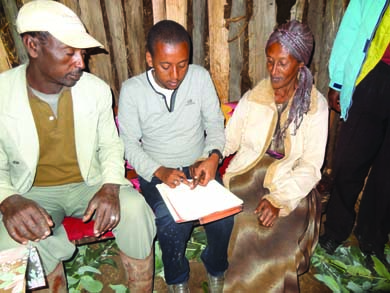 Feleke’s family greeted the visitors with a seat of honor, on a University of Michigan blanket that had been brought to them by Feleke (as a gift from Susan Weinberg), and a meal of doro wat, a spicy chicken dish. Kyle, Thomas, and Feleke handed out gifts: T-shirts, a solar-powered radio, backpacks. They talked about Biru’s new cattle, which friends and family of the Logues had chipped in to replace.

Kyle and Biru, the two dads, sat down together over a beer and talked, through an interpreter, about what should happen next. Biru, as well as Feleke’s mother, Elfinish, assured Kyle that keeping Feleke in the States was what they wanted.

Kyle and Ruth Ann had begun the process of becoming Feleke’s legal guardians in probate court. They had Biru’s signature and now needed to have Elfinish sign the papers as well. She inked her finger and made her mark on the document.

Soon it was time to return to the States. Before they mounted the horses to return to the car, Biru posed for a photo, sitting on one of the horses. His back is straight and his expression serious. “I think he realized,” Kyle wrote on his blog, “this would be a picture that Feleke would someday treasure—his father on a horse, dignified and in charge, almost majestic.” 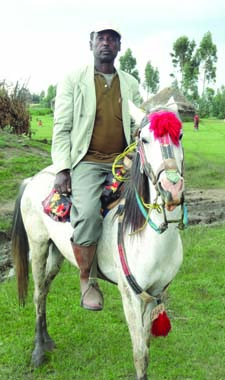 The group returned to Addis and prepared for the flight to the U.S., but not before encountering a series of roadblocks and frustrations that delayed their progress. First, Thomas required treatment for a severe allergy he’d developed to the horses. Then, Kyle discovered their IDs and money—their very ability to get back to Ann Arbor—all of it had been stolen from the hotel. After jumping through countless hoops—to secure both critical medication and critical paperwork—the group finally departed Ethiopia.

Kyle later wrote on his blog: “So there you have it. The lives of the Biru Kumbis and Logues have been changed forever, inextricably intertwined. There really isn’t any going back.”

It’s a Thursday evening at the Logue house on Ann Arbor’s north side, nearly a year after Feleke first stepped into the home, fascinated by the refrigerator and shower, and unsure of what anyone was saying to him. The Logues have become his permanent legal guardians, and Feleke has been approved by the United States Citizenship and Immigration Service for an F1 student visa, renewable as long as he remains a student, with the Logues as his sponsor.

Feleke waves his arms in excitement. “Mama, daddy, I got 100 points on my spelling test today at school,” he says. These days Feleke is enrolled at Christian Montessori in Ann Arbor, where he is in a class with fourth, fifth, and sixth graders. He has a half-tuition scholarship.

The Logues ask about the words he spelled, and he rattles off: f-r-i-e-n-d, c-a-s-h-i-e-r. Ruth Ann explains to him what a cashier is: “You know when you go to the store with Mama? It’s the person I pay.” Kyle tells him he did a good job spelling friend, especially since the vowels are tricky.

Feleke remembers another word from the test, and spells it with confidence, a word he now knows well in two languages: f-a-m-i-l-y.

This feature originally appeared in the Spring 2013 issue of the U-M Law School magazine, Law Quadrangle.