Behind the scenes with Trey Burke at the 2013 NBA draft 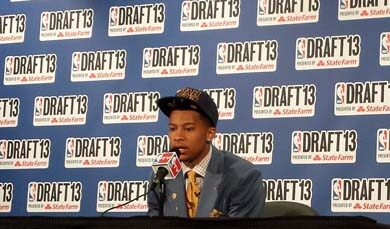 On the biggest day of Trey Burke’s life, he sleeps in. The last couple of days have been exhausting: travel, media requests, public appearances. Tonight, June 27, is the NBA draft, a night Burke has dreamt about. The first item on Thursday’s itinerary is an 11 a.m. meeting, so he sleeps until 10:30. He dresses quickly and takes the elevator in his midtown Manhattan hotel down to the ninth floor.

Burke enters just ahead of Syracuse’s Michael Carter-Williams; two top point guard prospects beating the buzzer. Stu Jackson, the NBA’s executive VP of basketball operations, tells the soon-to-be draftees, most of whom are not yet 21, what to expect, such as media requests and what happens if there’s a trade.

Riding the elevator back to his room with two 7-footers, Indiana’s Cody Zeller and Kentucky’s Nerlens Noel, Burke—a 6’1″ guard among giants—arrives and sits down with a reporter. He is quiet but not shy. The two days he’s been in Manhattan have felt like a week, he says; the last quiet day he had was shortly after Michigan’s national championship loss to Louisville back in April.

Burke will turn 21 in November and says he is confident that returning to Ann Arbor for his sophomore year and leaving after this past season were the right moves. The Big Ten Freshman of the Year turned himself into the consensus National Player of the Year and set a single-season school record for assists. His statistics—18.6 points and 6.7 assists per game; 46 percent shooting—improved across the board and he led Michigan to its first Final Four in 20 years. 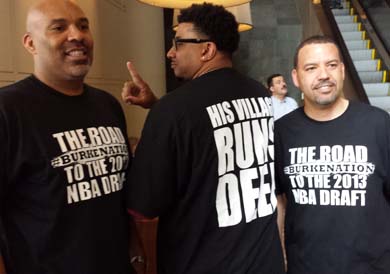 Burke’s signature moment came during this year’s NCAA Tournament, when he drained a deep three-pointer to force overtime against Kansas. Someone reminds him of the shot nearly every day, he says, made possible by Mitch McGary’s crushing screen and McGary’s long-armed defender switching on to him, then heaving the high-arcing shot that sent Wolverine Nation into hysterics.

Burke fully realizes the concerns that surrounded him coming out of high school are following him to the NBA: “I’m hearing ‘too small, not quick enough.’ I’m going to always hear that the rest of my life. I’m going to continue to try to prove people wrong.” He doesn’t look at mock drafts but he hears others talk about them. As for his anticipated draft spot, “I continue to tell people two through eight.”

Burke soon heads for a 12:30 lunch with NBA commissioner David Stern and the rest of the top prospects. Among the fans waiting outside the hotel hoping to snag autographs are three teenagers who already have several players’ signatures on mini basketballs. When asked who they’d like to meet most, they all say Trey Burke.

After lunch, Burke heads back to his room and relaxes, watching “SportsCenter.” He hears the analysts speculate on where he may be spending the next several years of his life. Not knowing is a strange feeling, he says. 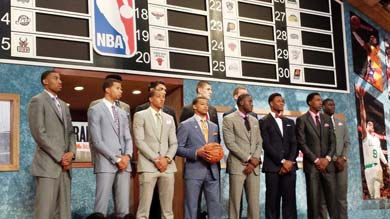 Changing into his draft-night suit, picked out a month before at Cicchini, a high-end custom clothier in Birmingham, Mich., a University of Michigan theme emerges: blue with a white checkered shirt, gold tie, and gold pocket square. There’s a lot of pressure to look good since he already posed for GQ.

At 4:30 Burke boards the bus to Brooklyn’s shiny new Barclays Center, home of the Brooklyn Nets. He checks Twitter and does a quick video interview with NBA.com. Arriving at the arena “was kind of like I was watching TV because I’ve watched the draft so many years.” Posing with other top prospects for group shots, Burke stands front and center and is the only player given a basketball to hold.

Players head for the green room, a roped-off area on the arena floor with individual tables for all of the invitees. Burke is joined by his parents and three siblings; Michigan coach John Beilein stops by but takes a seat in the stands before the draft begins. 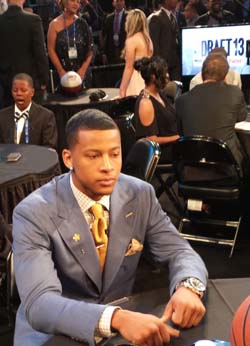 Nearly 60 of Burke’s family and friends from his hometown of Columbus, Ohio, are seated throughout the arena. Most made the 10-hour trip on a charter bus, playing Trey Burke trivia on the way. (One possible question: “Who was Michigan’s last first-round pick?” Answer: Jamal Crawford, who went eighth in 2000.) They wear black Burke Nation draft t-shirts with white writing on the back that reads, “HIS VILLAGE RUNS DEEP.”

At 7:35, Stern takes the stage and announces UNLV’s Anthony Bennett as the surprise No. 1 pick. Burke stands, claps, and slaps hands with Bennett. Indiana’s Victor Oladipo, a college rival of Burke’s, is chosen next and receives hearty congratulations from Burke.

Five more teams make their selections. Burke hasn’t heard his name called yet, and he is beginning to feel restless. The Detroit Pistons, now on the clock for the eighth pick, need a guard, and taking a Michigan player would be a popular choice. Instead, Detroit selects Kentavious Caldwell-Pope, a lesser-known shooting guard from the University of Georgia.

Burke is nervous because he didn’t work out for any teams past the No. 8 pick. He fears he may slip dramatically. The Minnesota Timberwolves are up next. His dad, also his agent, sees an alert on his phone. He turns to his son and says, “Trey, Minnesota’s going to draft you. They’re either going to trade you or they’re going to trade someone on their team because they already have a point guard. So they’re probably picking you for another team.” Burke seems to barely hear him; he is focused on preparing to take the stage and receive the congratulatory handshake from the commissioner.

From Wolverine to Timberwolf

At 8:30, Burke finally hears: “With the ninth pick in the 2013 NBA draft, the Minnesota Timberwolves select Trey Burke from the University of Michigan.” Even after being tipped off, Burke is still in shock. He hugs his mom, dad, and older sister, and waves to his other siblings as a league staffer hands him a Timberwolves hat and points him toward the stage. Burke and Stern shake hands. “It’s about time,” Burke says with a smile.

Stepping from the stage, Burke is ushered toward Shane Battier, who is conducting interviews for ESPN. “I’m happy to be a Timberwolf,” Burke says, despite knowing a trade is almost a certainty. Shuttled to the NBA TV set for yet another interview, he is told Utah may have traded for him. As fans yell, “Trey, you’re going to Utah!” he tries to give his Minnesota hat to a league representative but is told to keep it on.

Led down a narrow hallway and into a holding room, he will remain there for the next two hours as the trade becomes official. It’s a scenario that Jackson, the VP, discussed in the morning meeting. The trade has to be called in to the league office and approved. “If there are multiple trades in a night, things can get backed up, so it may be a while,” Jackson had said earlier.

There were several trades, so all Burke does is wait, like a pilot trying to land at a busy airport. He chats with the other players who enter the room, including Noel, who was awaiting approval of his trade from New Orleans to Philadelphia. “They just said I got traded. To Utah. I’m all up in the air right now,” Burke tells him at one point. When Burke’s college teammate, Tim Hardaway Jr., is taken by the New York Knicks with the 24th pick, the large contingent of Knicks fans cheers.

And then to the Utah Jazz

At 10:26, right before announcing the 27th pick, Stern officially announces the trade. Twenty minutes after that, Burke emerges from the holding room, now wearing a Utah Jazz hat that is a better match for his suit. He moves to a press conference in a nearby room, followed by individual on-site and remote interviews with media members. As has been the case all week, he is one of the most sought-after players in the draft. 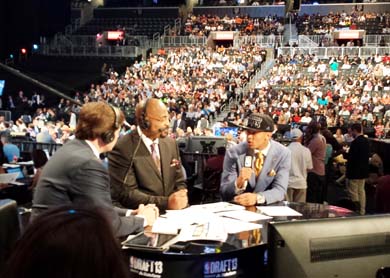 Burke sits down for a chat with NBA TV. (Image: Andrew Kahn.)

“I’m happy to be a part of the Jazz family now,” Burke will say. He never worked out for them but he has positive memories of his interview with the coaching staff at the combine in Chicago. “I’ll have an opportunity to play right away and make an impact. Utah is a great fit.”

Two years after being tabbed the 26th best point guard in his class coming out of high school, he is not only the ninth pick in the NBA draft, but also guaranteed to make a little more than $2 million in salary the next two seasons, with a team option for a third and fourth year. Proud of his accomplishments, he is far from finished. After all, someone points out, eight teams passed on him. Says Burke with conviction: “I definitely think it will motivate me. It will make me get in the gym more. I’ll get better, continue to work hard.”

After months of endless demands and pressure, Burke can finally relax and celebrate. When he hits the pillow it will be for the first time as a professional basketball player.