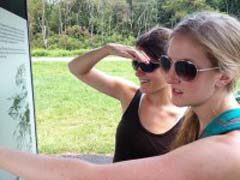 As graduate students in U-M’s School of Natural Resources and Environment, Allie Goldstein, MS ’13, and Kirsten Howard, MS ’13, grew bored with the conversation on climate change. So they changed the conversation.

“Whether people accept the science or not is no longer interesting,” says Goldstein. “But what we do find interesting are all the innovative and incredible ways people are adapting to the impacts of climate change.”

They found it so interesting, in fact, they set off on the “Great American Adaptation Road Trip.” Since May the duo has been driving cross-country, “uncovering stories of people and places using their wits and resources” to respond to flooding, heat waves, drought, rising sea levels, and other extreme weather events.

“We are really interested in scientific storytelling and have been amazed by the resilience and preparedness we are seeing,” Goldstein says from somewhere deep in Louisiana.

Check out some Adaptation Stories

“People are getting scrappy,” she notes. “They’re applying for grants, leveraging partnerships, and implementing no-regrets strategies that save more than they spend. Often, it takes just one committed person to lead the charge. And many of the ‘adaptation’ projects we’ve encountered also serve to mitigate greenhouse gas emissions—a win-win.”

Some forward-thinking community leaders are moving proactively; others are responding to specific events. Either way, says Howard, people often find that enhancing their resilience to climate change impacts also provides an opportunity to build other things: a green roof, a living shoreline, an improved irrigation system, and an emergency preparedness plan, to name a few. 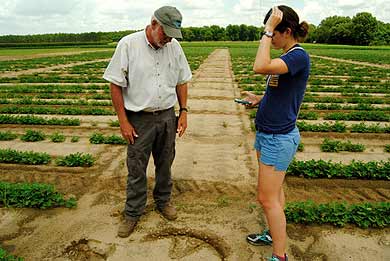 Allie Goldstein gets a tutorial on the advantages of variable irrigation in Camilla, Ga. Watch the video. (Image: Kirsten Howard.)

Entrepreneurs may benefit as well. “We were just saying there’s a whole new industry around raising houses,” Howard says.

In some hard-hit areas, new government positions are being created to help citizens source and apply for grants, navigate the complexities of flood insurance, and access federal funding to shore up their local infrastructure.

• In Boston, Howard and Goldstein spoke with the city’s chief of environment and energy and learned how Spaulding Rehabilitation Hospital (located on Boston Harbor) was designed to withstand intense storms and floods. Critical electrical and mechanical facilities are located on the roof, rather than the basement, for example.

• In Island Park, N.Y., they interviewed a solar company that sent their employees out on flooded streets after Hurricane Sandy to shut down solar systems, preventing electrical fires. The company is now selling more solar systems with back-up batteries that will help New Yorkers keep the power on during the next storm.

• In Baltimore, a city with a sweltering urban heat-island problem, the duo encountered “tree keepers,” who are planting an urban forest in unshaded neighborhoods, which can cool the streets by up to 9 degrees Fahrenheit.

“There is a lot going on at the local and state level,” Goldstein says. “And while there is something to be said for a top-down approach, a bottom-up approach can catalyze that. There’s a lot of innovation that comes from the ground up.” 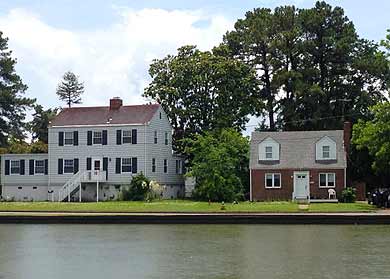 Many victories are bittersweet. In Vermont, Goldstein and Howard met a pair of young farmers who were forced to retreat to higher ground after Hurricane Irene. A river had jumped its banks and cut a new course through their fields. The couple rebuilt their business, but did so under great duress and psychological trauma. “It was a very emotional and moving interview,” Howard says. “The whole experience stirred up a lot of challenges for them as both a couple and as professional farmers.”

When Goldstein and Howard visited a devastated island community near New Orleans, one longtime resident was completely defeated.”His reaction to us at first was, ‘I don’t want to talk about it anymore. No one is helping us stop the erosion,'” says Howard. “It’s heartbreaking to see the frustration people are dealing with when they feel nothing is happening.”

In other cases, Goldstein and Howard encountered people who were reluctant to invest in changes now that could offset impacts later. “It may be a case where they want their community to stay the same and not take too many chances when it’s not clear to them that the risks are real,” Howard says.

Nearly eight weeks into their road trip, the duo has found what most road trippers do: It’s more about the journey than the destination. With each encounter they produce multimedia blogs and podcasts; sometimes they pitch their stories to local media outlets. They also are developing relationships with organizations like the Climate Adaptation Knowledge Exchange and the Georgetown Climate Center, which act as clearinghouses for case studies, information, and other key resources that people can access and share.

At summer’s end, Goldstein hopes to land full-time work consulting on climate adaptation strategies; Howard meanwhile, will take her experience to the New Hampshire State Coastal Program as a National Oceanic and Atmospheric Administration Coastal Management Fellow where she will do estuary planning.

Til then, they are enjoying this new conversation around “adaptation.”

“We’ve been amazed by the breadth and variety of strategies we’re seeing,” Howard says.

Adds Goldstein: “The road trip has given us a lot more hope.”