A double dose of the macabre

Looking for some spooky thrills this Halloween?

Then dig out your old University Palladium from 1883 and look up the names of two medical students whose nefarious deeds still have the power to shock and horrify more than a hundred years later.

Herman Webster Mudgett entered the University’s Department of Medicine and Surgery in 1882 and earned his degree in 1884. Hawley Harvey Crippen studied at the College of Homeopathy during the fall and winter of 1882-83 but did not graduate.

Although both men enrolled at the University in the same year it’s doubtful they knew one other. Surgery and homeopathy are very different disciplines, and the two men themselves were quite dissimilar. Mudgett was known to be charming and outgoing; Crippen, mousy and bland.

However unlike, they shared a common fate: Both were tried, convicted, and hanged for murder in grisly cases that made sensational headlines on both sides of the Atlantic.

Arch fiend of the century

Herman Webster Mudgett has the dubious distinction of being one of America’s first serial killers. He also doubled as a swindler, forger, arsonist, thief, kidnapper, and bigamist. Even today his monstrous acts are notable for their plentitude and cold-blooded efficiency. No one knows how many people he killed but estimates range as high as 200. 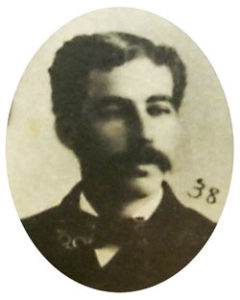 Mudgett is best known under the alias H.H. Holmes, which he adopted upon moving to Chicago in 1886. In that city he prospered as a legitimate druggist, but secretly indulged a passion for crime, primarily fraud and homicide. In 1890 he completed construction of an imposing three-story commercial building of his own design that would soon become known as the Murder Castle.

From the outside the building looked something like a Medieval fortress, complete with turret. On the inside it was a diabolical killing factory, a labyrinth of trap doors, secret compartments, and hidden stairways.

The upper floors held soundproofed, airtight rooms hooked up to gas lines so that victims could be silently asphyxiated (or possibly roasted alive). A nearby chute dropped directly to the basement, where vats of acid waited to strip the flesh from bodies whose skeletons were sold to medical supply houses. Other corpses were partially dissected, then offered as cadavers to medical schools. Those that couldn’t be sold were incinerated in the huge furnace or buried in pits of quicklime.

Mudgett’s victims were mainly young women, some of whom worked in his building. Others were out-of-town visitors who rented rooms there. These were found in especially plentiful supply in Chicago during the World’s Columbian Exposition of 1893.

As the fair drew to a close, however, the doctor’s fraudulent business practices began to catch up with him, and he abandoned the city with his new bride (still being married to the previous two) for a cross-country spree of swindling and murder. A year later he was finally arrested for killing his henchman, Benjamin Pietzel, and three of Pietzel’s children.

While he languished in a cell in Philadelphia the full story of Mudgett’s heinous life of crime came out. 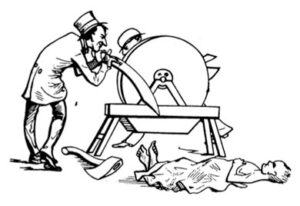 This satiric drawing of a Michigan medical student from an 1880s volume of the University Palladium turned out to be eerily prophetic in Mudgett’s case.

Reporters asked former instructor Dr. George Heath what the accused killer had been like while studying at Michigan. “I remember him as a mild, inoffensive student of ordinary ability and seemingly the last person in his class to follow the murderous career that he seems to have followed,” the doctor replied.

However, a classmate remembered Mudgett as a liar and a sneak with an unnatural liking for dissection who once obtained permission to take a body home with him to cut up over spring vacation.

It was also in Ann Arbor that Mudgett first concocted the macabre swindle of which he was most fond. He would take out a life insurance policy on an accomplice, then steal a cadaver of the same height and weight and disfigure it so that it could no longer be recognized. After the accomplice left town the cadaver would be presented as that of the insured, and the policy redeemed.

Mudgett went to the gallows on May 7, 1896. The fall did not kill him instantly. Instead he dangled at the end of the rope, slowly strangling, for nearly 15 minutes. At his own direction his coffin was encased in cement and buried 10 feet deep.

He had a terrible fear of his body being stolen and ending up on a dissecting table. 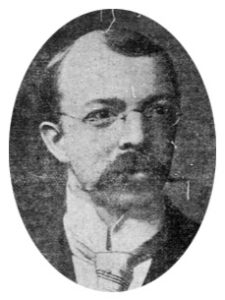 Hawley Harvey Crippen was born in Coldwater, Mich., in 1862. Small, shy, and myopic, he came to Ann Arbor to study homeopathic medicine at the University of Michigan in 1882. He left after one year but later earned a degree from the Hospital College in Cleveland.

Some years later while working in New York the 30-year-old Crippen became infatuated with a young girl of 17, an aspiring and dismally untalented actress named Cora Turner. Their marriage was not a happy one. After the couple moved to London Cora grew openly contemptuous of her diffident husband and brazenly flaunted her infidelity. Crippen meanwhile conducted a more discreet love affair with his secretary.When Cora disappeared in the early months of 1910 her friends notified authorities. Crippen’s explanation that she had gone back to America satisfied the police, but after he suddenly left the country with his secretary the chase was on. The suspects’ flight across the Atlantic and eventual capture in Quebec created a media frenzy in both the U.S. and Britain. 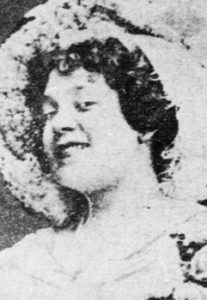 When Cora Crippen disappeared, Dr. Crippen was convicted of her murder.

Prosecutors maintained that Crippen poisoned his wife and then cut her in pieces to more easily dispose of the evidence. After a thorough search of the house, investigators had found beneath the basement flooring a gelatinous blob of surgically-excised human flesh that was determined to have once belonged to Mrs. Crippen. Head, limbs, and bones were never located. The English press seized upon a crime that appeared strikingly similar to the murders of Jack the Ripper, still fresh in the minds of many Londoners.

Crippen’s trial lasted five days, after which the jury took just 27 minutes to find the mild-mannered medical man guilty. The judge immediately sentenced him to death. A request for clemency was rejected by Home Secretary Winston Churchill, who like many others had been obsessively interested in the case.

Crippen was hanged on Nov. 23, 1910. But many doubted his guilt. There were allegations of prosecutorial misconduct and many questions remained unanswered—primarily concerning the whereabouts of Cora’s body. Having successfully gotten rid of most of the evidence, why would the killer have left the incriminating blob of flesh in the cellar?

In the intervening years the Crippen story has continued to fascinate, especially in Britain. It is said to have been Alfred Hitchcock’s favorite murder. Elements from the case repeatedly found their way into his movies and television programs. Many other writers and filmmakers also found inspiration in the unhappy tale. There was even a stage musical made from it.

Recently a forensic biologist from Michigan State University conducted DNA analysis on the surviving tissue samples. He concluded the flesh found in the cellar wasn’t from Cora Crippen. It wasn’t even the right gender.

So far British authorities have refused to consider a posthumous pardon.