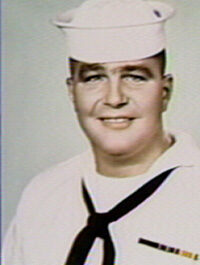 Like so many people born before 1963, George Perrault remembers where he was when he got the news on Nov. 22 of that year.

It was early afternoon when his phone rang at the Naval Support Facility in the Washington, D.C., neighborhood of Anacostia.

His wife, Lois, shouted on the other end: “The president’s been shot!”

More than a thousand miles away in Dallas, President John F. Kennedy would be pronounced dead within the hour.

In the hours and days that followed, Perrault would be sent to participate in the President’s Honor Guard, giving him a front-row seat to history during a time of national crisis and grieving.

Perrault, then 24, worked a desk job in the Navy’s supply division. Decades later, he would work a similar job at the University of Michigan, serving 18 years as a resource manager for the Navy and Air Force ROTC out of North Hall.

When he hung up the phone that fateful day in 1963, he shared the news with the men in the office, “and we all scurried to find radios,” he says.

In that moment of shock and chaos, Perrault forgot his name had been submitted to supplement the U.S. Navy Ceremonial Guard in the event of a state funeral. He would soon remember, as military police arrived at his office to escort Perrault and a fellow officer to the ceremonial guard’s headquarters.

The guard’s primary duties include putting on military funerals at Arlington National Cemetery and participating in prestigious ceremonies. This, however, was new territory for Perrault, then a Navy petty officer second class.

“We started a little practice,” he says. “We put a trash can in the middle of the room [to represent the coffin]. We took broom handles and mops to simulate rifles.”

Meanwhile, the president was declared dead at Dallas’ Parkland Memorial Hospital; Vice President Lyndon B. Johnson was sworn in as the 36th president on Air Force One; and Jacqueline Kennedy returned to Washington, D.C., with her husband’s body in a coffin.

When the First Family entered the White House around 4:30 a.m. on Saturday, Nov. 23, Perrault was stationed just inside the doorway.

“Mrs. Kennedy had her famous pink suit on,” Perrault recalls. “I couldn’t help myself. I looked down and saw the blood that was still on the suit.”

Kennedy’s “Death Watch” began with a private viewing in the East Room of the White House. Men from each of the armed services stood vigil, taking half-hour shifts, standing absolutely still.

The flag-draped casket was moved to the U.S. Capitol Rotunda on Sunday morning to lie in state. Perrault participated in the first 30-minute watch.

Mrs. Kennedy and daughter Caroline, 5, knelt at the casket. Nearly every head of state was in the room.

Standing there, perfectly still, Perrault remembers thinking, “Don’t mess up!” He still gets nervous looking at the photos.

After the initial ceremonies ended, the Capitol Rotunda was opened to the public. 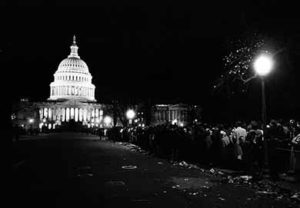 With the U.S. Capitol in the background, mourners formed a line which lasted through the night, to pay their respects to the slain President John F. Kennedy on Nov. 24, 1963. (AP photo)

News reports say mourners waited as long as 10 hours in the chilly air, in a line that stretched 40 blocks.

“I had never seen anything like that before,” Perrault says. “How could one single thing bring all those people together?”

When that funeral detail was over, Kennedy’s coffin was carried to St. Matthew’s Cathedral. Perrault was dismissed.

“Today, for the life of me I can’t remember how I got back home,” he says.

Somehow he arrived at his D.C. apartment, in time to watch the funeral on TV with his wife.

“After that it was Monday morning, back to work,” Perrault says. “In the Navy, once you were finished with one duty station, you immediately moved on to the next station. You didn’t have time to reflect a lot.”

During his time in the Navy, Perrault had the opportunity to see some 20 countries. Still, the “Death Watch” was one of the “highlights of the duty,” he says. “You look back on it and it was really, really something.”

“I was probably a teenager when [my father] showed me the pictures,” she says.

Today, a photo of her father in the Capitol Rotunda hangs in her office at the VA Ann Arbor Healthcare System.

Her father didn’t talk about that experience much.

“He’s never wanted the light shined on him,” Puckett says.

It took time for Perrault to open up about his experience to anyone.

“I get emotional,” he says through tears. “It took many years.” 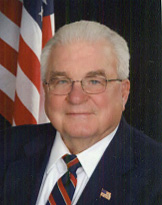 Perrault retired from his ROTC job at U-M in 1999. Now 74, he lives in Saline. Over the years, Perrault has given talks at local schools and has shared his experience with his American Legion buddies.

“It’s mainly around the anniversary time that you really think about it,” he says.

This year, to mark the 50th anniversary of the tragedy, Perrault will travel to Dallas with his 16-year old granddaughter, Taylor Puckett.

They’ll visit Dealey Plaza, where the president was assassinated. And they’ll tour the Sixth Floor Museum housed in the old Texas School Book Depository building, where Lee Harvey Oswald set up his “sniper’s nest,” and where today photos hang, some including Perrault.

“I’m just really looking forward to be able to go through this with him,” Taylor Puckett says. “I think this will be one of the most memorable experiences of my life.”