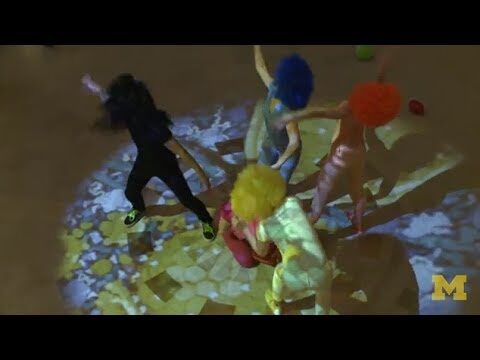 Red spike heels punctuate the floor in unison as four “harpies” in vibrant shades of pink, yellow, blue and orange encircle the intended victim, the alien invader. Their sharp steps keep pace with driving music that sets a tone for the devouring that is about to begin.

A kaleidoscope of colors, abstract images and geometric patterns projected from on high down to a stage-within-a-stage define the boundaries of this choreographed conflict. The music becomes turbulent, dissonant as digestion begins.

The artistic work, not unlike many produced and performed at the University of Michigan, tells a story, complete with the classic elements of plot, character, conflict, theme and setting. In this depiction the characters are the elements of a cell and the setting is the human body. The plot involves a process called autophagy, and the theme addresses this complex function that the body goes through 365 days a year as each cell seeks to renew itself. Conflict comes when the process does not work as expected.

Dancers demonstrate the “art” of the cellular process called autophagy.

“Autophagy is a process in which our cells break down parts of themselves and then reuse those resulting macromolecules to keep essential processes going,” says Dan Klionsky, Arthur G. Ruthven Professor of Life Sciences, at the Life Sciences Institute. The definition of autophagy is self-eating, he says, explaining how the cell disposes of that which no longer is needed while recycling essential parts worth keeping. The process, which scientists have come to better understand in the last decade, is very intricate and essential, but also can go wrong.

“Defects in autophagy can contribute to cancer, some types of neurodegeneration, diabetes, heart disease, liver disease, various muscle diseases, you name it,” he says. “Almost every month, there’s a new connection being discovered between autophagy and some aspect of human health and disease.”

The unique artistic collaboration among a cell biologist, composer, choreographer and scientific illustrator was the brainchild of Klionsky, who for a number of years has sought ways to make science accessible to his students and the many “lay” audiences he addresses. His first collaborations were on illustrations of complex biological processes.

“Dan contacted me about 10 years ago and wanted to do a painting of autophagy. I don’t remember this but he told me that, at that time, I told him there wasn’t enough information to do the painting. But he kept at me and then eventually we made plans to do the first illustration. And it’s been ongoing since then,” says David Goodsell, illustrator from The Scripps Research Institute. “We’ve done three projects together working on particular illustrations. It seems like each time he gets a new scientific discovery he comes asking for a new painting.”

Influenced by others who were working with DNA music (technical simply-toned music used to replicate the sounds genetic material might make) Klionsky began to collaborate with composers. But he wanted to do something different and more recently approached U-M alumna Wendy Wan-Ki Lee, a faculty member at the Chinese University of Hong Kong, about setting autophagy to music.

“I was a little bit scared at that time because I didn’t know anything about science, or autophagy in particular, and I had no clue as to what kind of music he would expect from me,” says Lee, who earned a master’s and doctorate from U-M in music composition and theory. “But I was also very excited in many ways because that means that I can do a lot of crazy things with my music in terms of structure or instrumentation and so on.”

Their first collaboration was a solo piano piece she called macromusophagy.

“Anytime I’m working with someone who doesn’t know the field well, in particular an artist, they ask questions that typically make me look at the whole project, the whole aspect of autophagy in a slightly different way,” Klionsky says. “For example, Wendy asked me about the speed of certain parts of the process, which I had not thought about, but she needed to know with regard to the tempo of the music.”

After playing macromusophagy to rave reviews at a Life Sciences Institute event, Klionsky decided to stretch even further.

“We’ve done paintings. We’ve done the music. I want to do dance.”

Colleagues introduced him to Peter Sparling, Thurnau Professor of Dance at U-M, who is no stranger to collaborations with scientists. Sparling not only served as the choreographer but as a production manager. He is a screendance artist who combines video imagery with live performance, choreographing and editing together complex productions for dance performances, festivals and museum exhibitions.

“So, call me the ring master,” Sparling says. “I choreograph the movement for the dancers. I choose the images—the visuals. I choose the music. I decide the scenario. I put the visual images and the music and the dance together so that it all fits together.”

When Sparling and Klionsky first got together they discussed how to use the work for education and live performance.

“And as I listened to him, he was describing the processes within the cell in terms of human or animal behaviors as if they were animated, as if they have wills of their own, and I thought, ‘aha, this is it. This is a hook,'” Sparling says.

View the 17-minute video in its entirety.
The result was a five-scene multimedia presentation produced by Sparling that first was featured in a School of Music, Theatre & Dance event in June, and more recently has been introduced in Klionsky’s biology classes.

“I think it would be most helpful in a teaching environment for non-science students or people that aren’t really well versed in science,” says Mollie Lesser, neuroscience major.

“Sometimes I thought, like, what is going on, and I thought that Professor Klionsky and Peter’s explanation of it allowed me to gain a new appreciation for something that I wouldn’t have seen beforehand, which is very interesting,” says Jonathan Markowitz, also a neuroscience major.

Klionsky says a reaction like Markowitz’ was just what he was looking for from the piece.

“What I hope (for students) is what I experienced the first time I saw the rehearsal of the dance being done,” Klionsky says. “After it was over, when we were walking back, we were discussing: ‘What did Peter mean by this part? Why were there dancers in red high-heeled shoes,’ for example? ‘What does this mean?’ And I realized, that one advantage is, since it is not absolutely literal and not absolutely obvious what was been depicted at every step of the video, it fosters discussion.”