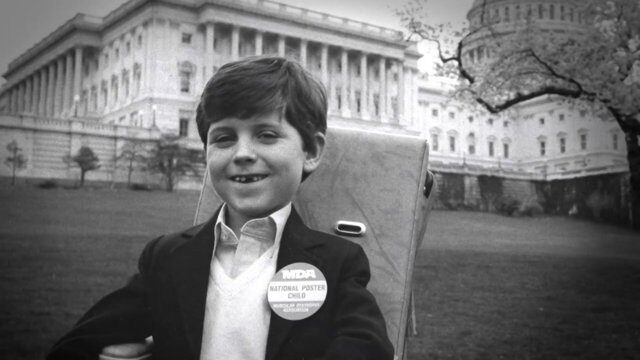 Christopher Rush, BA ’99, could assemble a puzzle with his eyes. A box with a thousand pieces and a Star Wars theme was the ultimate challenge. The more plain black pieces, the better.

Diagnosed with muscular dystrophy seven months after his birth, Rush would live 29 years longer than doctors predicted. He would graduate with honors from the University of Michigan. He would earn a law degree from Wayne State University. He would meet the president of the United States. And he would become the first quadriplegic ever to be certified as a SCUBA diver. Now he is the subject of the documentary film GO FAR, directed by former classmate Zack Arnold, BA ’02.

See the film: Sept. 9, 2014 at 6 p.m., U-M Alumni Center.
“This movie is the final puzzle Christopher is putting together,” says Arnold, a film and TV editor who spent the past six years documenting Rush’s extraordinary life. “There are so many pieces and connections that go into making a film, and I don’t believe anything happens randomly. Christopher is making a lot of this happen. I firmly believe that.”

Fittingly, Arnold and Rush first collaborated on a student film at U-M while Rush was on sabbatical from law school. When it became clear their fellow classmates were reluctant to team with the guy in the wheelchair, Arnold invited Rush to join his group.

“Turned out he was the best producer I ever worked with,” Arnold says.

Rush died in 2007 at age 31. But even in death, he has been Arnold’s most committed, productive, and inspiring collaborator.

“Christopher was brilliant at making you forget he was in a wheelchair,” Arnold says. “He was so charismatic and optimistic. He had a great sense of humor and was relatable from the minute you met him.”

GO FAR documents Rush’s journey from an initial doctor’s assessment that he would be nothing more than a “dishrag” who would die by age two, to the national poster child for Jerry Lewis’ Muscular Dystrophy Association, to a world-traveling motivational speaker. “GO FAR” is the acronym for a framework Rush devised to actualize one’s dreams: Goals, Obstacles, Focus, Act, and Review. Its universal tenets apply to people of all ages and abilities, and Arnold hopes to complete Rush’s vision for an educational primer that can be applied in classrooms and other organizations.

“Christopher was brilliant at making you forget he was in a wheelchair.”
“Christopher always said everyone has some form of a disability,” Arnold says. “And he felt his job was to use the abilities he had, not focus on the disabilities. He approached life as ‘What can I do for you?’ instead of the other way around. He had a profound impact on every person he met.”

That profound impact sustained Arnold through the challenging ups and downs of completing his first feature-length documentary. Based in Los Angeles, where he most recently worked as an editor on the USA Network series “Burn Notice,” Arnold has filled nearly every hiatus and spare moment since 2007 researching, writing, interviewing, directing, producing, and fundraising in order to finish the business left undone when Rush passed away.

“Christopher was so humble that he told me very little about what he had done with his life before we became friends,” Arnold says. “At his memorial I learned that he was very much a leader and always was. He spoke all over the country and the world and people listened. I had this feeling like, ‘Someone needs to make a movie to spread Christopher’s word and his program. Someone needs to do this.’ And I realized, ‘I guess it will be me.'”

Once Arnold decided to go for it, he encountered obstacle after obstacle until a friend suggested: “Dude, just use the ‘GO FAR’ program.” So he followed Rush’s framework to the letter and soon found himself in the Rush family basement where he spent countless hours on a surreal mission of discovery. He combed through boxes of VHS cassettes, photos, and other personal artifacts that revealed not only Rush’s character, but his parents’, in increasingly vivid layers. “His parents are the real heroes of this film,” Arnold says. “And the more I learned, the more firm and resolute I became: People have to see this. People have to see this.”

He hired fellow U-M grad Sophie Kruz, BA ’11, as his director of photography. He also brought on an editor and a co-producer, which completed his core team. As with any independent production, financing has been Arnold’s most vexing challenge.

“It didn’t take six years to make the movie,” he says. “But there have been huge gaps in production when I had to work, when I had to raise funds to travel or do the next round of interviews.”

“More than once I felt him trying to teach me a lesson.”
Over the years he’s developed a grass-roots base of support, relying on the “good will of people,” social media, and crowd sourcing. But it’s often Rush he feels coming to his aid at the most critical moments. Upon connecting with a Beverly Hills attorney, for example, Arnold was stunned to discover she had known Rush as a kid.

“He gave her rides in his wheelchair,” Arnold says of the serendipitous encounter. (The lawyer has since signed on to do his contracts.) Not surprisingly, entertainment law was the path Rush had intended to pursue. “I could just picture Christopher winking somewhere,” Arnold says.

Now, the final fundraising push is underway via Kickstarter (launched Nov. 20), as Arnold seeks to get the movie into festivals and hand it off by year’s end to a company that will help him sell it. With the end credits set to roll on this emotional, personal odyssey, Arnold is ambivalent about wrapping this unique partnership with Rush.

“I’m a very different person because of knowing him,” he says. “Imagine someone with no use of their limbs putting puzzles together. This movie and this process have been the same thing. More than once I felt him trying to teach me a lesson. In hindsight, I’m glad it was so hard. And even though I’m ready for the movie to be done, part of me doesn’t want it to end.”