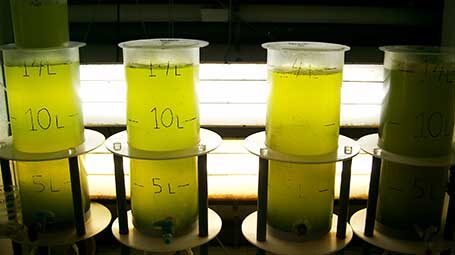 A growing partnership between the University of Michigan and a company in Dexter is a model for how university-to-business ties can produce significant mutual benefits.

The collaboration in the last several years between Valicor Inc., and the U-M College of Engineering also illustrates how innovative programs can keep recent graduates working in Michigan on world-class technology. 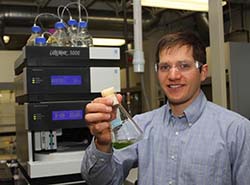 At the heart of the sharing agreement are important new scientific and technological advances in what could be called the greenest of the burgeoning green energy movement – algae research.  Valicor is working with the lab of U-M chemical engineering professor Phillip Savage on new, more efficient ways to extract oil and other elements from microalgae for use in biofuels, pharmaceuticals, nutritional supplements, animal feed and other products.

Valicor founder Tom Czartoski branched into this area in 2007 as a natural extension of his original two business divisions.  In 1996, Czartoski saw the need for a new industry that could clean and recycle factories’  industrial oils and metal-working fluids rather than throwing them away.  His initial two-employee shop in Dexter has become three divisions with 200 employees, facilities in several states, and annual sales of more than $100 million.  The original business, now called Valicor Separation Technologies, involves centrifugal separation technology to clean fluids; a second division, Valicor Environmental Services, has a fleet of trucks that collect non-hazardous waste for processing and recycling; and the newest division, Valicor Renewables, is focused on commercializing the microalgae extraction.

Despite the company’s far-reaching growth, Czartoski had to reach out only about five miles into Ann Arbor – to U-M’s Business Engagement Center – to find some of the world’s leading algae researchers.  The BEC introduced Valicor to Savage and his research lab, then facilitated grants through the Michigan Corporate Relations Network, a collaboration of six state universities that connect Michigan corporations to university assets.  In October 2013, the network approved a $39,047 grant from its Small Company Innovation Program, or SCIP, which  Valicor was required to match.  The network also awarded smaller SCIA grants, or Small Company Internship Awards, to pay for part of the salary of U-M grad students working as interns at Valicor.

One of Savage’s PhD candidates, Bobby Levine, worked with Valicor as a grad student, then as a part-time employee and is now the full-time technology development manager for Valicor Renewables.  Because Levine, 28, is a leading researcher in various aspects of extracting lipids and other parts of the microscopic algae cells, he could have taken his newly minted PhD anywhere in the country to continue his work.  Instead, because of the relationship between Valicor and U-M, Levine will be staying right where he is, continuing to work with the company and university on research that could eventually transform how the world uses the many resources in an algae cell.  Valicor has developed patent-pending methods that may solve the current inefficient algal oil extraction that limits large-scale production and, thus, economic viability.

“It’s just sort of weird that I did this research on algae and right down the road there’s this company doing the same thing,” Levine said.  He continues to interact with Savage and the lab’s grad students, and this summer, thanks to a SCIP grant, will supervise a U-M grad student intern.

Jennifer Aurandt, Valicor’s technology development program manager, also has a PhD from U-M, in biological science, and worked at the university’s Life Sciences Institute when it first opened.  She initially went into academia, but later joined Valicor in part because of its corporate commitment to sustainability.  Aurandt said the close proximity to U-M is an important advantage.

“It’s just nice knowing that if you have a question, there’s an expert eight minutes away from our office,” she said. “With the great university … with renowned experts, it’s really easy to pick up the phone and call one if we have a question. And they’ll have an answer.”

On the U-M side, Savage says the practical, hands-on concerns of a business, along with its workplace demands, are a valuable resource for professors and students in the academic world.

“It’s a huge help to have a company like Valicor engaged with us in our research enterprise,” Savage said. “I think that there is some good synergy that can take place. In some cases, we’ve been able to assist them through access to equipment and analysis methods that we have available in our lab.  And there have been instances where they have certainly assisted us, especially … engineering-related issues (such as) scale-up processes, and also some mentorship with my students in the lab who have been working in the algae area.”

The state grants and funds provided by companies help the academic research labs to press ahead with cutting-edge research, which in turn cycles back to benefit the companies wanting to commercialize the technology.  “It makes a big difference,” Savage said of the funding for his lab.

As for Levine staying in Michigan, that’s a bonus, Savage says.

“Bobby’s case is one of those success stories:  Somebody came to the university attracted by the reputation of the school and opportunities here, and after finishing … got a great opportunity in his field.  We’d certainly like to see more of that.”