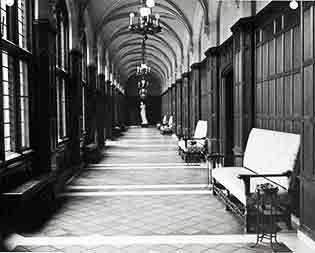 In 1911 the University enlisted a young woman named Myrtle White to raise money to build dormitories for women in Ann Arbor. (There were no dormitories for either sex in that era, but the rising number of female students had led to a common view that private rooming houses could no longer meet the need.)

Myrtle White had only recently graduated from U-M. Yet despite her age and inexperience as a fundraiser, she made appointments with wealthy alumni in New York and went to ask for help. 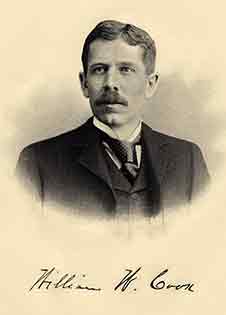 In the heart of Wall Street, she found herself looking across a spacious desk at William Wilson Cook, a U-M law graduate of 1882, a major force in American corporate law, and a very wealthy man. (He was chief counsel to the Mackay telegraph and cable companies, Western Union’s main competitor.) Cook was divorced—unusual for a man of his station in that era—irascible, opinionated, and inclined to be generous to his alma mater.

“Have your president call on me,” he said.

So it was that President Harry Burns Hutchins soon secured Cook’s promise to help pay for the construction of a women’s dormitory. Before long Cook would pay for the whole thing, plus furnishings.

The Martha Cook Building, named for Cook’s mother, was not the first women’s dorm at Michigan. The Helen Newberry Residence enjoys that distinction by a thin margin.

But perhaps more than any building at U-M—even more than the Law Quadrangle, Cook’s far larger gift to the University—Martha Cook bears the stamp of its benefactor. He chose the architect (York and Sawyer of New York, who had designed Cook’s own home and would go on to design the Law Quadrangle); gave many of the furnishings; and oversaw the design from afar.

To the knowledgeable visitor who strolls through Martha Cook’s public rooms and corridors, it is as if Cook’s ghost walks alongside, pointing to things he held dear and symbols of things he believed.

Especially remarkable are representations of women—the gender in general and several women in particular. 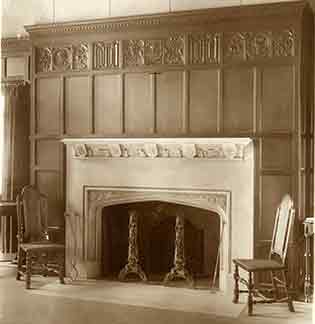 “The purpose of that building,” Cook wrote to President Hutchins, “was and is to raise the standards of all of the young women in the University by selecting the best examples and organizing them as a unit.”

He believed in women’s education. But his standards for women belonged to an era that was passing even as Martha Cook was being built. They were Victorian standards that cherished the woman-as-mother, the foundation of morality in a stable society.

“America is a woman’s country,” Cook once wrote. “Women control the social life, the religious life, the artistic life, the encouragement of literature, the household expenditures, the customs and manners. If woman becomes mannish, her influence over man will decline and manners, customs, and morals will deteriorate … And then there are the children. At a tender age they imbibe the principles and teaching of their mother. If they are reared to revere their country, and uphold its austere institutions, the future is safe.”

Thus the role of the Martha Cook Building: In Cook’s mind it was to be a place of domestic beauty where young women of the University—including “poor girls,” Cook was specific about that—would learn the domestic virtues and thus help to preserve all that Cook valued in the vanishing small-town America of his boyhood.

So when Martha Cook’s designers put a space for an inscription on the fireplace in the dining room and asked Cook what words to choose, he replied: “As I pass along Wall Street and hear the strident voices of women suffragettes declaiming in open automobiles, I feel that we are drifting from our ancient moorings. Hence, a ‘recall’ inscription on the Ann Arbor building might be appropriate, such as ‘Home, the Nation’s Safety.’”

Portia at the door 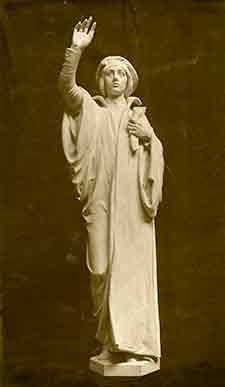 Over the front door on South University, the architects placed a niche for a statue. But of whom? Cook rejected classical and biblical figures. “You will notice they are all angels or saints,” he remarked, “and not a lawyer or sinner among them.”

Then he hit on the idea of Portia, the heroine of Shakespeare’s Merchant of Venice.

Why did she appeal to Cook?

He admired well-educated women and believed law and lawyers to be the foundations of American society; he also nurtured a variety of anti-Semitic views common to WASPs of his generation. Thus his enthusiasm for Portia. As the brilliant apprentice to a lawyer, she outwits the hateful moneylender Shylock. She was “Shakespeare’s greatest lawyer,” he said, “who … brought to book the bloodthirsty Jew—a full-throated woman of vivacity, poise, and feminine charm.”

So it was that anti-Semitism played an ignominious role in a campus landmark. (Cook’s Portia, incidentally, was sculpted by Attilo and Furio Piccerilli, who, with their four brothers, carried out Daniel Chester French’s design for the statue of Abraham Lincoln that sits in Washington’s Lincoln Memorial.)

Venus in the corridor 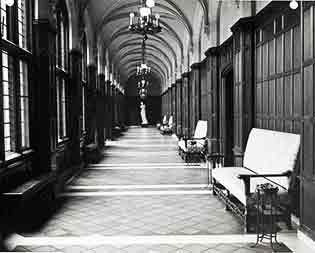 At the far end of the main corridor of the first floor, the visitor glimpses an exact replica of the armless Venus de Milo. It was found in Genoa, Italy, and shipped across the Atlantic in the spring of 1917, just as the U.S. was entering the First World War. For a time the ship was feared lost, Venus with it; then both turned up safely in port and Venus was hauled to Ann Arbor.

For the niche over the front entrance, Cook had rejected classical models. But he was glad to have this particular goddess. “The statue of Venus knows no age, no nationality, and no locality,” he remarked. “It is cosmopolitan, belonging to all ages, all nations, and all localities. Venus, you know, according to the Greeks was born of the foam of the wave, and hence was a child of nature.”

Mrs. Cook in the Red Room 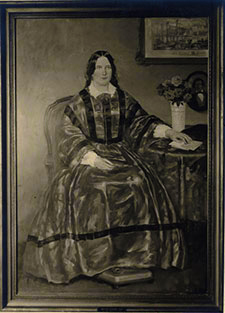 Cook venerated his mother, Martha Wolford Cook (1828-1909), the daughter of a Dutch family in upstate New York. As the wife of John Potter Cook—a descendant of Plymouth Colony pioneers, a founder of Hillsdale, Mich., and a well-to-do businessman and banker—she raised nine children; William was the third. Beyond that, not much was known of her, and when an artist was commissioned to paint her portrait for the dormitory, Cook had only a single daguerreotype of his mother to lend as a model.

The artist was Henri Caro-Delvaille, a young French Impressionist painter who was in the U.S. recuperating from war wounds. In his portrait of Mrs. Cook, he said, “I have tried to portray an epoch in which the mother was queen in her home … respected for the simplicity of her manners and the greatness of her virtues.”

The portrait hangs in the Red Room, which was built to replicate the library of a 17th-century English manor house. On another wall hangs a Flemish tapestry. It showed “a hunting scene,” William Cook remarked, “and I don’t know whether such a scene would fit in with that building unless they call it ‘Uncle William hunting duck in the Seventeenth Century.’ I’m not sure whether it is a duck or a goose. Judging from most of the people I run across, I guess it is a goose.” 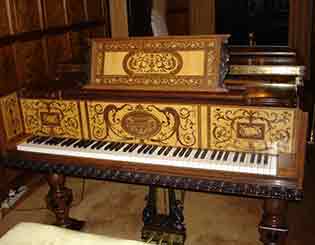 In the lovely room that was first called the Blue Room, then was renamed the Gold Room—it celebrates both of Michigan’s colors—there is a fabulous Steinway Grand Style A piano, six feet long, with an inlaid case of Circassian walnut, 42 types of wood in all (from 17 countries), and 12,000 moving parts. Inscribed in Latin above the keyboard in gold lettering are the words “Music is medicine to the troubled soul” and “1913,” the year Cook commissioned it.

Why did Cook have such a piano built when he did not play?

According to Margaret A. Leary, author of Giving It All Away: The Story of William W. Cook & His Michigan LawQuadrangle, he may have had it built for the opera singer and pianist Isabel Hauser, who was certainly Cook’s friend and may have been his mistress. She died in December 1915, shortly after the opening of the Martha Cook Building, leaving Cook so downcast that his family and friends feared for a time that he might commit suicide. It was moved to Martha Cook after his death.

President Hutchins was one of many who urged Cook to visit Ann Arbor when Martha Cook was complete. “You certainly ought to see the noble building that your generosity has made possible,” the president wrote.

But Cook never laid eyes on either Martha Cook or the Law Quadrangle. He seems to have feared that the buildings, however fine, would still fall short of the images of them that he held in his mind’s eye.

When Dr. Walter Sawyer, the U-M regent who was Cook’s good friend, nudged him to come and see the fruits of his gifts, Cook replied: “No, Doctor, you cannot persuade me. You want to spoil my dream. I shall never go to Ann Arbor.”

Cook died in 1930. A bust of the benefactor, modeled on his death mask, was placed on the north mantel of the Gold Room, where it gazes at the Steinway grand once played by Isabel Hauser.

Sources include Marion L. Slemons, ed., A Booklet of the Martha Cook Building at the University of Michigan(1936); Margaret A. Leary, Giving It All Away: The Story of William W. Cook & His Michigan Law Quadrangle (2011); James Tobin, Michigan Law at 150: An Informal History (2009); and the papers of Harry Burns Hutchins, Bentley Historical Library.