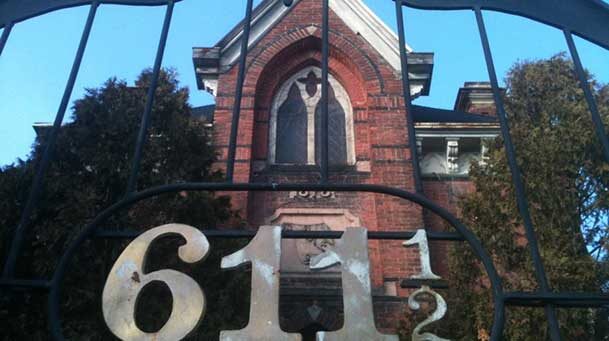 No one now remembers exactly how a great American architect came to design Ann Arbor’s first permanent fraternity house. But William LeBaron Jenney was in town that year—it was 1878—and somehow the brothers of Delta Kappa Epsilon’s Omicron chapter found him.

Michigan’s chapter of DKE was U-M’s third fraternity (after Beta Theta Pi and Chi Psi). It had been started in 1855 with just six members. By 1861 it had grown fast enough to send 51 boys to the Union Army.

After the war, the chapter again grew steadily. Members held meetings at Ann Arbor’s Masonic Temple and roomed separately all over town. By the early 1870s they were talking about building a clubhouse of their own, and that led them to William Jenney. 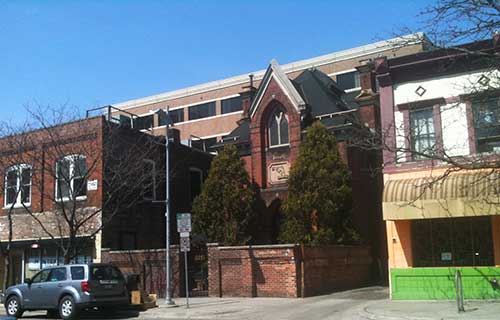 Like a tiny fort on William between Maynard and State Streets, William Jenney’s “Temple,” since nicknamed “the Shant,”  holds court behind a brick wall and a locked gate. (Photo: D. Holdship.)

A castle in miniature

Born and raised in New England, the architect had spent the Civil War years as a Union engineer. He started a practice in Chicago, but in 1876 he began commuting to Ann Arbor to teach. (His courses were U-M’s first in architecture.)

It was Jenney’s contemporary in Chicago, the architect Daniel Burnham, chief designer of the World’s Columbian Exposition of 1893, who said: “Make no little plans; they have no magic to stir men’s blood…” When the fraternity boys asked Jenney about a clubhouse, he went at it with something like Burnham’s dictum in mind. 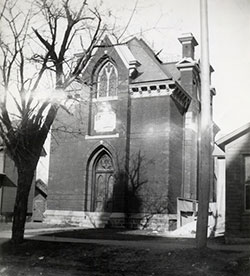 This image of the Shant is dated to about 1900. (Image courtesy of U-M’s Bentley Historical Library.)

Jenney’s portfolio included a magnificent Gothic cathedral for Chicago’s Grace Episcopal Church. He now borrowed from that same design, though on a shrunken scale. What he envisioned was not a practical meeting place for rough-and-tumble undergraduates. It was more like a miniature medieval castle.

The sketches on his drafting board had steep, slanting Gothic lines; blocky chimneys like turrets; and a toothy entablature encircling the roof. Jenney said the style was 13th-century French Gothic. It looked like a fortress for gremlins.

DKE alumni raised $2,300 to buy a narrow lot at 611½ William Street and borrowed another $1,000 for the building. The cornerstone was laid in 1878. Construction was done in time for a dedication in the spring of 1879.

At first, the boys apparently called it “The Temple,” but after a while—again, for reasons no one remembers—they started to call it, mysteriously, “The Shant,” and that name stuck.

See you at the Shant

The Shant wasn’t big enough for the members to live in. Instead, Michigan’s DKEs started the “club system” of fraternity living at Michigan—upperclassmen rooming and dining together in a single boarding house and bringing younger members in for meals. The house was Mrs. Hathaway’s at 609 South State (where the Law School’s Hutchins Hall stands now). But every Saturday night, very late, the boys would march up State Street in hooded black robes, heading for chapter meetings at the Shant.

That became a permanent ritual. Long after 1923, when the chapter purchased and took up residence in a sprawling house at 1912 Geddes, the brothers—including a future president, Gerald R. Ford, ’35—gathered every week at the Shant for meetings. (William LeBaron Jenney had long since left the faculty and gone home to Chicago, where he gained fame for designing the world’s first steel-frame skyscraper, the Home Insurance Building.) 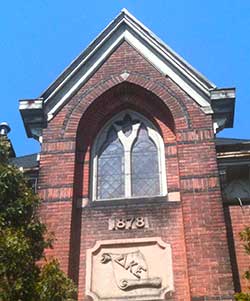 Though weathered, the Shant still stands in all its gothic glory. (Photo: D. Holdship.)

So it went until the 1960s, when fraternities in general and Michigan’s DKE house in particular fell into disfavor and neglect. DKE’s big house on Geddes burned down in 1968. The chapter staggered and the Shant, left to decay, was burglarized and vandalized. (There was at least one good moment in that era: Commander Cody and His Lost Planet Airmen played a summer concert in the Shant’s front yard.)

But the Shant’s day was not done. Determined DKE alumni saved it in a 30-year series of rescue efforts.

First came a Detroit industrialist, Wilfred Casgrain, a U-M DKE who had graduated in 1916; he spearheaded a fund drive for essential repairs. (One major improvement: the 19th-century gas lighting system was replaced with electric lights.)

Two efforts to rekindle DKE purely as a social club sputtered. Then, recognizing the need for residential quarters, alumni restarted DKE in a former sorority house purchased on Olivia Street. And to relieve the chapter of the financial burden of the Shant, alumni led by David Easlick, MBA ’83, executed a series of maneuvers that put Jenney’s old castle into the hands of a separate nonprofit.

Finally, in 2004, in a move to keep the property out of developers’ hands, the national organization of DKE moved its offices to 611½ William Street.

More remodeling followed. The first floor was given over to the fraternity’s national affairs. But, up the tight spiral staircase, today’s DKEs still gather for chapter meetings amid old furnishings and the portraits of the five DKEs who have lived in the White House—Ford of Michigan; Rutherford B. Hayes of Kenyon College; Theodore Roosevelt of Harvard; and the two George Bushes, both of Yale.

Outside, a little tombstone still marks the grave of of Abe, a fighting pit bull who served as DKE’s mascot in the 1920s. And bricks in the new patio show the names of alumni who gave money to save the Shant in keeping with DKE’s motto: “Friends from the Heart, Forever.”