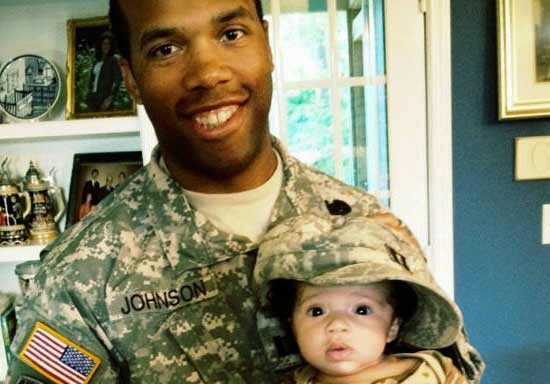 Now, as a student in the Erb Institute, he is redeploying his Afghanistan military experience on the ground in America. Johnson is set to graduate with a dual MS/MBA degree from the School of Natural Resources and Environment and the Ross School of Business in 2015. He plans to make healthy food accessible to underserved populations, bootstrap troubled inner-city neighborhoods and create hope and prosperity for the future.

“I saw the impact that sustainable solutions had in Afghanistan, and I wanted to dive deeper and refine some of the skills I developed in the military,” explains Johnson, a West Point graduate who earned the Bronze Star, Purple Heart and Army Commendation Medal with Valor for actions in combat. “Pursuing a career in the sustainability space would allow me to serve, do something interesting, and make an impact on people and the environment from a business point of view.”

During the 15 months he was assigned to the 173rd Airborne Brigade in Nuristan Province, Johnson managed reconstruction projects and worked closely with local Afghan contractors. The centerpiece of the American-led rebuilding effort from 2007 to 2008 was the installation of micro-hydroelectric turbines along mountain-fed rivers in three isolated villages embedded in the south of the Hindu Kush valleys.

“These turbines brought a renewable-energy source to the middle of nowhere,” Johnson says. “At the time, I wasn’t familiar with the concept of sustainability and didn’t understand its benefits. However, when we delivered electricity to people who had never had access to it before, the effects were really transformative. Not only did electrical power enable residents to light their homes and charge their cellphones, but it also allowed us to build better relationships with the villages, reduce American casualties, and advance our mission.”

Initially, Johnson’s Army experience with micro-hydroelectric power generation in Afghanistan steered him toward the study of renewable energy and transportation when he entered the Erb Institute in fall 2012. This past summer, he interned at the Dow Chemical Company, where he was aligned with Dow Automotive Systems and worked with researchers to improve the fuel efficiency of vehicles.

Johnson’s “somewhat circuitous” pathway in sustainability studies took a “180-degree” turn after he enrolled in the environmental-justice course “Poverty, Environment, and Inequality” at SNRE. Class discussions centered on “food deserts” and “food insecurity” in America’s poorest communities. This struck a chord of concern, and Johnson quickly shifted gears to focus on food and agriculture.

“I recalled my days in Afghanistan where I was responsible for disseminating humanitarian assistance,” he explains. “I helped to feed hungry people who were very poor, very rural, and without access to food. It was alarming to learn there are people in this country who don’t have access to healthy food. I wanted to know more.”

Currently, Johnson and five other U-M students, including Stephen Ahn and Connie Yu, also Erb ’15, are partnering with the U.S. Department of Agriculture on a master’s project to study the food-insecurity situation in Michigan and formulate possible solutions. Working with the Michigan Farmers Market Association and nonprofit organizations, including Ypsilanti, Mich.-based Growing Hope, Johnson is examining how market managers can help low-income families purchase fresh, wholesome food by using their Supplemental Nutrition Assistance Program (SNAP) benefits.

For the present, Johnson’s post-military career plans center on the private sector, where he would like to specialize in corporate consulting and strategic planning. He also wants to continue his community service as a board member of a nonprofit organization focused on food security. But those plans could change over the next two years, if he discovers another equally compelling aspect of sustainability to pursue.

“In the Army, I was working in a silo, so it was hard to see all the opportunities to apply my military training and skills to civilian life,” Johnson explains. “One of the benefits of Erb’s dual-degree program is that it has given me time to explore different sectors. Over the past year, I’ve been able to discover where and how I can combine business and sustainability to make a lasting impact.”