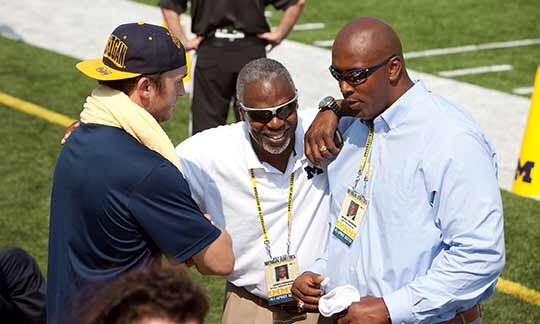 Much like the student-athletes he counsels, Greg Harden is focused, results-oriented, and constantly seeking ways to improve his game. The phrase “lifelong learner” could have been invented for him, and the way he blends intellectual curiosity and nitty-gritty experience in his approach exemplifies the whole person he counsels those athletes to be.

Harden was working as a clinical therapist in a hospital-based drug and alcohol rehabilitation program in 1986 when Bo Schembechler asked him to talk to U-M football players about substance abuse. Harden demurred; addressing those issues in such a population required a process, he said, not a lecture. Perhaps stunned but certainly convinced, the legendary head coach hired him as a consultant to develop and execute just such a process. 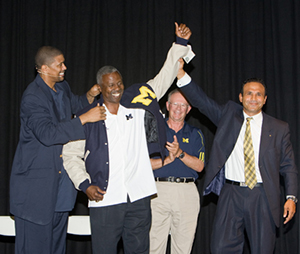 Harden became U-M’s director of athletic counseling in 1994. He also has served as an associate athletic director since 2008. Through the years he has worked with countless students coping with a range of intense issues during a brief — but critical — juncture in their lives. It’s a job that brings tremendous joy and, at times, devastating heartache.

After years of flying under the radar as “Michigan’s secret weapon,” Harden has begun to attract national attention for creating a counseling program that appears to be unique in intercollegiate athletics.

U-M sports legends Tom Brady and Desmond Howard have publicly credited him for his role in their success. In March Harden revealed just a few of his secrets during a “60 Minutes Sports” segment that aired on Showtime.

He recently sat down with Michigan Today to describe his relationship with the student-athletes who contribute so much to the University’s culture and legacy.

How would you describe what you do?

Greg Harden: My job is to teach people how to stay sane under insane circumstances. We’re asking these young people to push their bodies at a level the average person will never be able to comprehend, will never do, refuses to do, and thinks is crazy.

Society is harder on [these athletes] than it used to be. These poor children, everybody knows what they’re doing. I’ve got kids who think they have 700 friends. The peer pressure never wavers. You’re constantly bombarded with what someone thinks of you. The good news is that our student-athletes are getting more information on how to control social media. We make sure to remind our incoming freshmen about the perils of not being in control of their image.

What are the differences between students in revenue and non-revenue sports?

GH: Many of the students in non-revenue sports – we prefer to say Olympic sports – are not confused about their next move. There’s no fantasy that they can do this forever. But it’s difficult for many people in sports they can continue with to realize they may not have a pro career. Where it becomes similar in either case is how they’re so invested in their self-identity as an athlete; one is obsessed with the fantasy of the future, the other is grounded in “this is who I am.”

We try to get people to see themselves as a whole person; that, with or without their sport, their life is going to be amazing. You’ve got to be a broken record with this: Your self-worth and self-esteem don’t have to be on the line with your performance. It’s the same thing with the academic geniuses who come to Michigan: Your grade is not a reflection of who you are, it’s a reflection of what you do.

Did you have any role models or other inspirations for putting it together the way you have?

GH: My biggest influence was Dr. Howard Brabson, a professor at the School of Social Work here. When I was a guy who was convinced I would never go back to school after dropping out, he was the guy who said, “Not only are you going back to school, you’re going to get a master’s degree.” He taught the principle of looking at the whole person and all their influences, and he was gifted and talented at communicating with anybody from any walk of life. He became my hero.

One of my specialties in the master’s program was community organizing, and one of the reasons I’ve been able to be successful in this environment is I began to see each team as a unique culture.

How do you use that concept in your work?

GH: Softball is different from baseball. Field hockey is different from soccer. Soccer is the most popular sport in the world, and you’ve got to understand that when you talk to soccer folks. Swimmers and divers are radically different personalities; the only thing they have in common is water. Each is a totally unique culture and you have to study them as a unique social phenomenon, as opposed to “they’re just athletes.”

The mental demands on swimmers, who are swimming back and forth in one lane and can’t see anything but the bottom of the pool, are entirely different from cross-country runners, who can see the entire world go by. The gymnasts, to me, are some of the toughest athletes. While most people know how tough the athletes on the wrestling team and hockey team and football team are, the average person has no clue that gymnasts are taking a catastrophic injury risk every time they practice. You’ve got to really examine: What does it mean to want to participate in this sport?

How have you been able to get the administration on board with your approach? 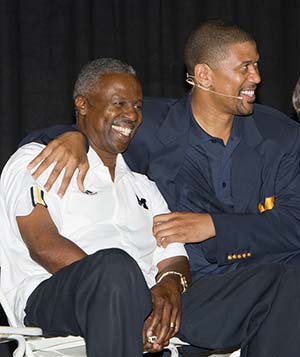 Jalen Rose is just one of many former U-M student-athletes who enjoy a close relationship with Harden. (Image: Martin Vloet, Michigan Photography.)

Joe Roberson hired me and wanted to push this agenda of having somebody on board who could talk about this stuff. Tom Goss came in and figured it out and supported me. Bill Martin further institutionalized the athletic counseling. And Dave Brandon is going to take it to a level that has never been seen in the United States in college athletics.

How do you deal with athletes who are recovering from injuries?

GH: Rehab is a mental bear, a mental beast. It is one of the most stressful periods in a young person’s life. Some have to tap into their spiritual belief systems in order to get back to a spot where they can even try again. Everybody else is on the court, in the pool, on the ice, on the field, and you’re in a room trying to stay motivated, trying to grind it out so you can re-enter the world of competition. But this is an opportunity for you to begin to understand that the real competition is between the ears. The mental game has to be tight for you to come back stronger than before.

What type of situation is the most difficult for you to help a student with?

GH: When I have to take someone to the emergency room for a mental health concern. It’s very emotional and it’s devastating to the coach, the sport administrator, and whichever one of us has to escort somebody because things are falling apart and we can’t think of anything else to do, other than get them psychiatric support. While that may be rare, it’s so emotionally draining because you can’t help but care about this individual and you’re just hoping it’s going to work out. It helps that we have amazing support from the University Health System.

Is there a question you wish someone would have asked you?

GH: What have I learned from students? In the beginning, the current athletic director at UConn, Warde Manuel; the Heisman Trophy winner and MVP of the Super Bowl, Desmond Howard; and a young man from Detroit named Walter Smith [football co-captain in 1994] changed the way I saw counseling. They made it clear that if I was not going to build a relationship, it wouldn’t work.

Countless other kids contributed. But those three had a tremendous impact on how I approach this work, and I have to give them credit. A clinical therapist working in a hospital-based alcohol and drug rehab program has a different mindset. I had to reject the whole notion of seeing everything as a pathology and begin to see how you help people grow, increase their self-honesty, get them to define themselves and change their habits, and learn not just to go through life but to grow through life.