The vanishing of Schoolgirls' Glen 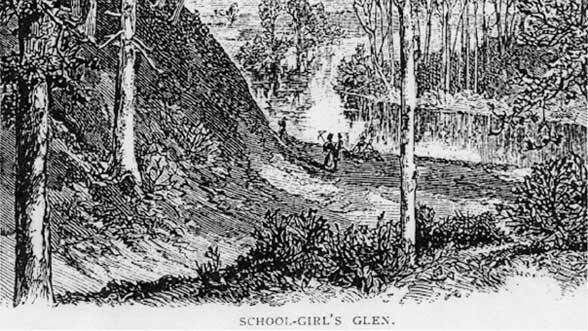 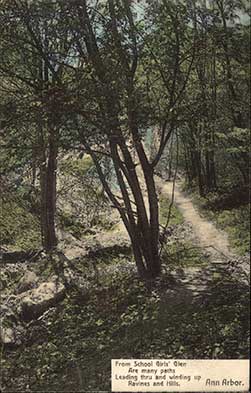 This postcard, mailed in November 1911, describes the glen’s “many paths leading thru and winding up ravines and hills.” Schoolgirls’ Glen may be one reason the homesick writer (an Ohio native) is “getting to like Ann Arbor a little better.”

In the 1800s, the people of Ann Arbor and students at the University liked to walk through a deep, narrow valley that led from the heights near Forest Hill Cemetery down to the Huron River below, at the campus end of the acreage that would eventually become Nichols Arboretum.

Every spring in the 1850s, Miss Mary Clark, the principal of a local private school for girls, would lead her pupils to the little valley to collect and press wildflowers. No one knows for sure, but that may be why people began to call the place Schoolgirls’ Glen.

Born of a glacier

The glen was made eons before it had a name. It was sculpted by a spring-fed rill that cut down through the glacial ridge along the Huron. The tiny stream’s course may have followed the track of great ice blocks that dropped off the glacier and melted to soften the soil. In time the cut grew to 300 feet at its widest point and ran more than 1,000 feet from the heights down to the river.

With slopes too steep for the farmer’s plow, the glen stayed much the same through the years. Strollers of the 19th century praised the views from the heights above and the Huron below.

“No person with any poetry in his soul can walk from the second railroad bridge north to Schoolgirls’ Glen without rhyming all the way,” wrote a U-M student of the 1870s. “We have tried the experiment. It can’t be done. There is no more beautiful bend in any river at any season … and many a homelier and more uninviting place than Schoolgirls’ Glen has been celebrated in song.”

There were shady places and sunny places and a mixture of clay and sand underfoot, so the glen grew an extraordinary mixture of shrubs, ferns, wildflowers, and trees in a tight space. In turn, the rich variety of flowers and trees attracted an exceptionally diverse collection of insects and birds.

Where the rill flowed into the Huron, birdwatchers counted sandpipers, bitterns, kingfishers, ospreys, mergansers, wood ducks, and gulls. Up the slopes, there were thrushes, thrashers, warblers, towhees, vireos, and Baltimore orioles. Near the orchards at the top there were juncos, finches, song sparrows, meadowlarks, indigo buntings, and snow buntings not long from the Arctic. 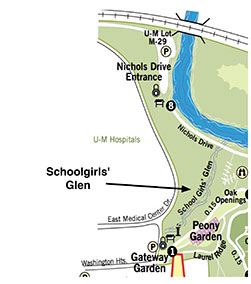 As with the greenery of the glen, it was striking to find so many kinds of birds in one small place.

It was “a strong demonstration of the disturbing influence of man’s methods,” an Ann Arbor ornithologist named A.D. Tinker wrote in 1908. “These isolated spots throughout the country where nature is allowed to hold forth in something of her normal state form havens of retreat for the birds and if unmolested will in the future be a powerful factor in the preservation of our feathered friends.”

Even in the 19th century, the glen was not untouched by human development. The tracks of the Michigan Central Railroad ran along the south bank of the Huron for years, and sometimes sparks and coals shed by trains touched off fires that spread up through the valley. But the greenery would recover — in fact, the fires cleared space for prairie grasses to thrive — and the birds would return. And when the glen was incorporated with neighboring tracts to form Nichols Arboretum in 1907, it seemed to be saved for good.

In the 1930s, engineering professors urged that the Arb be converted to a winter sports facility, but a committee appointed by President Alexander Ruthven — a zoologist — said no. “It should be kept so that it might become a haven of quiet one hundred years from now,” the committee declared, “when our rich native flora will have become a thing of the past in most places.”

Then, after the Second World War, Schoolgirls’ Glen began to wash away.

The University was pushing eastward into the glen’s watershed. Orchards and fields where cattle and sheep once had foraged were paved for parking. The soil of Forest Hills Cemetery was by now crowded with concrete vaults. The University’s giant Mary Markley Hall and the School of Public Health were built along Washington Heights. Stormwater from all the new roofs, paved roads, and parking lots was channeled into three big storm drains that emptied into the glen. As a final signature of human encroachment, the thick trunk of Ann Arbor’s sanitary sewer was laid square across the glen’s mouth down at the river, right out in the open.

(Click on the arrows at the side of the frame below to view slides that convey the glen’s changing landscape.)

In the early 2000s, students in the School of Natural Resources and Environment (SNRE) studied what decades of unchecked stormwater had done.

At the base of the glen they found a gulch that looked more like a place in the Rocky Mountains than the upper Midwest. Glacial boulders hidden underground for millennia now sat exposed on the ground, and a wash of rocks and gravel spread out to form a brown delta in the Huron. The finer soils that once had nourished the glen’s flowers were now way down the river, banked up against the dam at the end of Geddes Pond. Invasive buckthorn and honeysuckle crowded the slopes, and birdwatchers had followed the birds to other, more hospitable spots in the Arb.

The students estimated that, on average, at least a cubic yard of soil had washed out of the glen every day for the last 35 years. 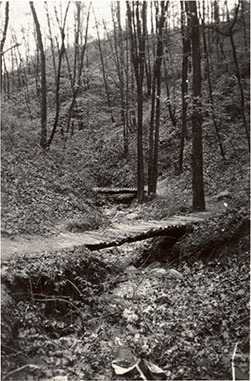 The first to sound the alarm had been Liz Elling, a graduate student in SNRE in the early 1990s who joined the Arboretum’s staff. She worked on the problem with Robert Grese, an SNRE professor who became director of the Arboretum in 1999 (and of the Matthaei Botanical Gardens when the two properties were joined in 2004); and Donald Gray, a retired professor of civil and environmental engineering, then president of the Friends of Nichols Arboretum and an expert on erosion control.

These three and others organized efforts to slow the run-off. Stepped pools and bioswales were installed near Washington Heights. Students and volunteers replaced invasive plants with native varieties that do more to anchor the soil. With help from a crew of Ford Motor Co. engineers and a grant from the Great Lakes Commission, a special dam of football-sized boulders was laid across the ravine to slow the flow.

When the new C.S. Mott Children’s Hospital was built, a giant stormwater detention tank was installed under the building. Some, not all, of the new parking lots in the area were constructed with permeable paving, so the rainwater sinks into the ground.

All of this helped. Erosion in Schoolgirls’ Glen has slowed. But it can never look as it did in the 1800s — too much soil is simply gone — and the three big storm drains still lead to the head of the ravine. The glen canrecover what Grese calls its “ecological integrity,” but only if more is done, and soon.

“It’s still very fragile and vulnerable,” he says. “It’s kind of a secret that no one knows about – just how scenic this land is — or was. It still is, today, if only we could reclaim it.”