All roads lead to Michigan 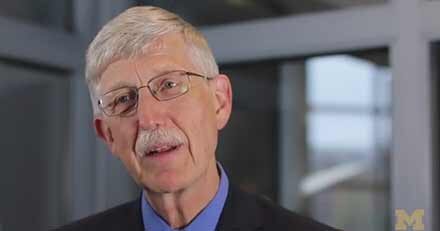 “I was tackling some very hard problems that I knew would be high-risk and I might fail. I wanted to be in a place that would encourage success as much as possible.” — Francis Collins, MD, PhD, Director, National Institutes of Health

As a physician-scientist at U-M from 1984-93, NIH Director Francis Collins collaborated on a team that discovered the genes responsible for several inherited diseases like cystic fibrosis. He “fell in love” with the fact that Michigan encouraged faculty to embrace bold and scientific efforts.

“This is a place where open opportunities and sharing of perspectives is not just the exception,” Collins says. “It’s the rule. It’s the norm. It’s what you do.”

Collins was one of several “faculty alumni” who recently returned to U-M for a biomedicine symposium marking the 10th anniversary of the Life Sciences Institute (LSI). Titled “Victors for Discovery: Biomedicine at Michigan,” the event highlighted the scientific influence of U-M in government, research, and health care.

In the clips below, they reflect on how Michigan ignited and fueled their ongoing passion to drive medical innovation and scientific collaboration.

The LSI symposium offered an opportunity to share current research breakthroughs, many of which were inspired at U-M.

Elizabeth Nabel is president of Brigham and Women’s Hospital and professor of medicine at Harvard Medical School. She once served as professor of internal medicine at U-M. “This was a wonderful place where we could come as young faculty and gain tremendous support for our dreams and our passion,” she says. “It was like being in a candy shop.”

Tachi Yamada, MD, is chief medical and scientific officer, executive vice president, and board member at Takeda Pharmaceuticals. While serving as associate professor of internal medicine and biological chemistry at Michigan, he collaborated with fellow researchers to found one of the first six gastroenterology research centers in the country. “It would not have been possible anywhere else,” he says.

Michael Marletta, PhD, is president and CEO of Scripps Research Institute. He worked as professor of medicinal chemistry and pharmacology at U-M. “Scientifically, the major discoveries we made that continue to be a theme through the lab all happened here,” he says. “And I don’t think it’s any accident.”

The University has devoted about $1 billion and nearly a million square feet of new space toward biomedical science and drug discovery in the past decade.

“We share the conviction that today’s biomedical problems are too vast and complex to be solved by any single scientist or addressed by a single academic field,” says Alan Saltiel, Mary Sue Coleman Director of the LSI. “Having all of these faculty alumni return to U-M really shows what can happen at an open, supportive university. We’re continuing to seed science with future leaders by carrying on the tradition of excellence that enabled these returning faculty to thrive here.”