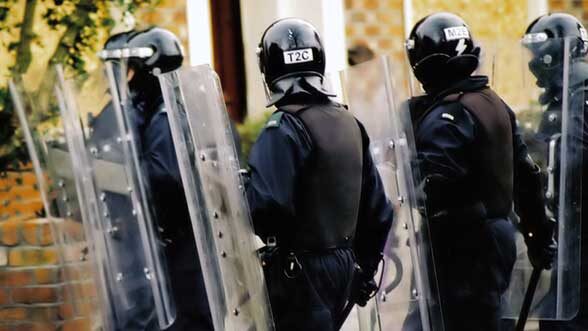 “What people in the media and what policymakers mean when they talk about militarization of the police is basically what we’re seeing on the nightly news: images of police officers standing atop armored personnel vehicles and training assault rifles on protesters,” says Joy Rohde, assistant professor of public policy at the Gerald R. Ford School of Public Policy. “What we’re really seeing are police officers who are acting like and looking like soldiers rather than officers of the peace.”

Rohde is the author of Armed with Expertise: The Militarization of American Social Science Research During the Cold War (Cornell University Press, 2013). She argues that militarized police departments lead to violent confrontations with protesters and that, when this happens, “we lose space for dissenters and protesters to engage in the democratic process.”

The roots of police militarization, Rohde explains, are in the 1033 program, an arm of the Defense Department set up in 1997 to provide military equipment, among other supplies, to police departments.

Originally part of the War on Drugs, this program has led to militarization of police departments outside of drug enforcement contexts, setting the stage for police violence during the WTO protests in Seattle in 1999, during Occupy Wall Street in 2011, and now during the protests in Ferguson, Mo.

“Of course, it’s very clear that when people get this gear they tend to want to use it,” Rohde says.

Policy Points is a video series featuring short segments on current events or recent research by faculty from the Gerald R. Ford School of Public Policy.