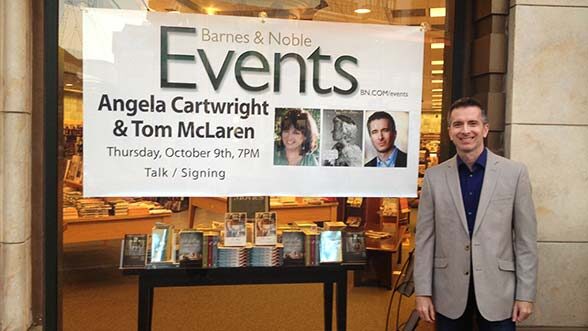 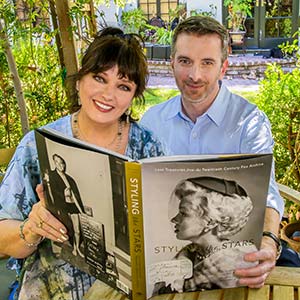 If former Hollywood executive Tom McLaren, BBA ’84, had been asked to read the script of his creative life through 2008, he would have sent it back for rewrites.

He’d logged two decades working in the financial side of the entertainment business, with jobs in Detroit, New York, and Los Angeles. He’d worked for CBS/Fox Video, Twentieth Century Fox Video, and Warner Bros. And while the career trajectory had been challenging and fun, he’d reached a stalemate.

“I knew there was something more, something different,” he says.

But the next act remained painfully unclear. And then his long-time friend and veteran actress Angela Cartwright (“Lost in Space,” The Sound of Music) said, “If you’re not happy with what you’re doing,  you are just a slug.”

Something clicked. McLaren decided to quit.

It was a bold move that came at a key point of his corporate financial career. In 2008 McLaren was a financial consultant at Warner Bros., supporting production across the bustling Burbank lot. On any given day he might see “ER”-era George Clooney playing pick-up basketball, the cast of “Friends” grabbing lunch, or Mel Gibson jumping into an elevator. 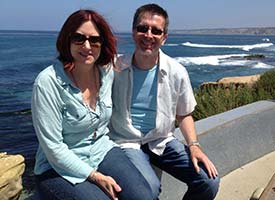 McLaren credits his wife, Mary McLaren, BBA ’84, with giving him the courage to make his career transition. (Photo courtesy of Tom McLaren.)

“I basically was budgeting 80-85 different studio departments and supporting them as needed,” he says of a job akin to running multiple companies in one self-sustaining city. Fortunately he had the business acumen to deal with the pressure.

But what environment would he face now that he willingly walked away from the security of steady employment? The two years that followed McLaren’s decision were tough. Through 2009-10 he battled to overcome the self-doubt and insecurity that had plagued him since childhood. He desperately struggled to nurture an artistic self he had long neglected.

Let’s put on a show 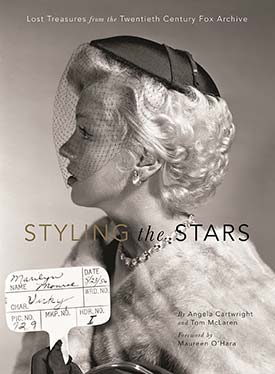 Marilyn Monroe poses for a continuity shot for the 1954 film There’s No Business Like Show Business. “It was the perfect image for the cover,” says McLaren.

Then in the spring of 2011, McLaren had a breakthrough when Cartwright pitched him on a book idea. What if they mined the Twentieth Century Fox archives to produce a photo collection of rarely seen images from iconic Hollywood films spanning the 1930s-70s?

The book would celebrate the unsung heroes of movie-making, the stylists who brought film characters to life through elaborate costume design, meticulous hairstyling, and the artistry of makeup.

“I was thrilled,” says McLaren, who closely identified with Hollywood players operating behind the scenes. This was the first time anyone in the business recognized him as a creative talent, and the project offered an ideal opportunity to blend his finance background with a passion for the movies and movie memorabilia.

Before long, McLaren took a deep dive into the Twentieth Century Fox archives — a setting he likens to the stacks in the U-M libraries — unearthing rare images of legendary actors Clark Gable, Elizabeth Taylor, Cary Grant, Marilyn Monroe, Julie Andrews, Audrey Hepburn, and more. He and Cartwright set their focus on the backstage world of continuity – seeking specific photographs taken to ensure an actor’s appearance remained consistent for the duration of a film’s production. 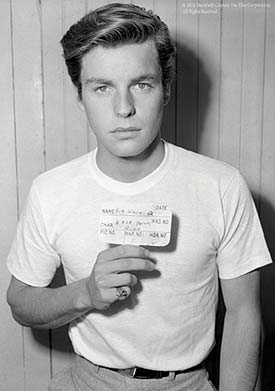 Robert Wagner poses with his placard for a 1953 production of Titanic. Wagner began his career in 1950 as a Twentieth Century Fox contract player.

Styling the Stars: Lost Treasures from the Twentieth Century Fox Archive arrived in stores Oct. 7. The gorgeous compendium showcases some of the most beloved actors who appeared on screen from the ’30s through the ’70s.

Readers will see that Rita Hayworth is never pictured without a cigarette. Bette Davis’ name is misspelled on her ID placard. Jokester Paul Newman is making faces in almost every photo. Some actors are photographed in character and others are not, often providing an inside look into a closely guarded persona. One of McLaren’s favorite shots is of an unusually jovial Marlon Brando on the set of The Young Lions. Other film classics showcased in the coffee-table book include The Sound of Music, Miracle on 34th Street, Butch Cassidy and the Sundance Kid, and many more.

“You get to see these very famous actors doing what is really considered a very mundane part of their job and it is fascinating to see how they treated it,” McLaren says. And for avid fans of film or fashion photography, McLaren notes, “there is not a book on the market that is exactly like it.” 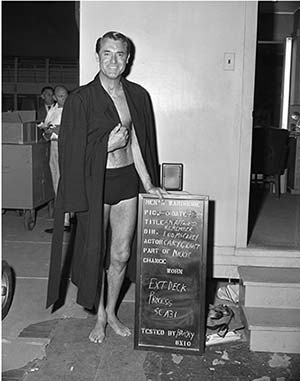 A debonair Cary Grant poses for the wardrobe department on the set of 1957’s An Affair to Remember.

The book is not the only product of McLaren’s collaboration with Cartwright. While details of Styling the Stars were shaking out in fall 2011, the former finance executive reached another pivotal revelation.

“I wanted to be an actor,” McLaren says, “but it was something I never said out loud before,” other than mentioning it to his wife, Mary (also BBA ’84).

Acting was a fleeting passion from childhood that McLaren never believed he could pursue professionally. But by 2011 he was tired of asking himself “what if,” and enrolled in his first acting class.

Despite feeling utterly terrified, McLaren hoped to discover an affinity for the craft. At the very least he expected to glean some enjoyment from the experiment. He was relieved to find “it just felt right” and a newfound self-confidence that had eluded him since childhood began to emerge.

“It’s addictive,” McLaren says about the energy and happiness that acting has brought to his career. “I think it was all meant to happen to me in the order that it did.” 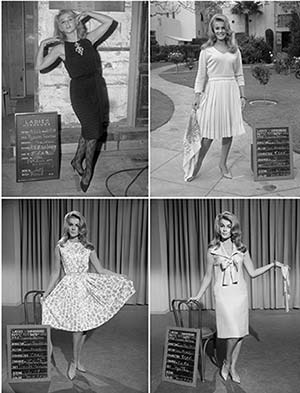 Ann-Margret gets camera-ready for the 1964 film The Pleasure Seekers.

Whatever the future holds, McLaren is confident his background in corporate finance will help him navigate the ups and downs of an actor’s unpredictable path. He relies on years of deep expertise to decipher complex contracts and control his financial future through well-informed decision-making.

He often revisits lessons learned in business school to navigate the uncertain terrain that comes with a career in the arts. It was at U-M where he first learned to cope with high-stress situations and challenges, developed interpersonal and problem-solving skills, and recognized the vitality of collaboration – all things he has utilized in his finance and acting endeavors.

With his debut book in stores now, McLaren is looking forward to the December release of the feature film Expelled from DreamWorks-affiliated Awesomeness TV. Next year he will appear – coincidentally — in the Twentieth Century Fox feature The Exorcism of Molly Hartley.

At ease with his new identity on the creative side of movie-making, the former studio executive-turned-author-and-actor has a few simple words of wisdom for people seeking to rewrite their own futures.

(Black & white images above are  from the book Styling the Stars, and were provided by Tom McLaren. Click the actors’ names for a larger version of each photo.) 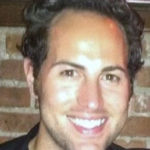 EVAN POUGNET is a freelance writer, photographer, and avid world traveler who has been on a never-ending adventure since graduating from U-M in 2009 with a BA in economics. After feeling creatively repressed for too long, he closed the door on continuing to medical school and is pursuing a career in acting and production work. He worked for Google in Ann Arbor and aspires to live in New York City or Los Angeles.
Social
Share on: Share on Twitter Share on Facebook