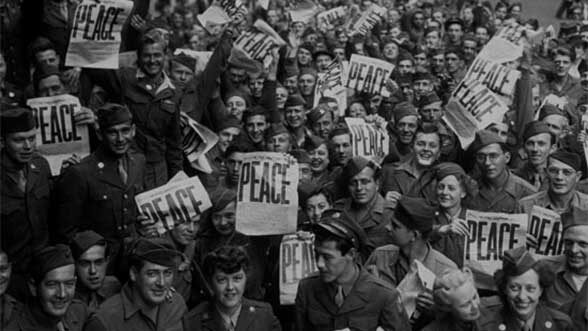 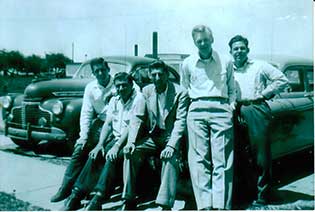 As Maurice “Jack” Gartner tells it, his dorm room was nondescript and nothing to write home about – maybe six feet wide by nine feet long. There was a single bed, a bureau, and a small desk with one chair. Over the desk hung about a half dozen dog-eared pin-ups that had survived his time in the Air Force.

If he left his door open, the tiny space would be jammed full of guys within five minutes. Everyone smoked cigarettes. The daily “bull sessions” revolved around girls, the football team, what they did in the war.

“In the military your buddy is your lifeblood,” says Gartner, BBA ’47/MBA’48. “And we carried that camaraderie over after the war. It didn’t matter what branch of the service you were in, what uniform you wore. We were all part of the same flag.”

And as U-M students these particular veterans were also part of the same postwar community facing an unprecedented housing crisis. While University enrollment in fall 1945 hovered around 12,000 students, that number jumped to 21,360 by fall 1948. More than 80 percent of male students — some 15,000 in all — and nearly 400 women students were veterans on the GI Bill. In the dormitories, singles became doubles and doubles became triples. Every rooming house within 15 miles was jammed. 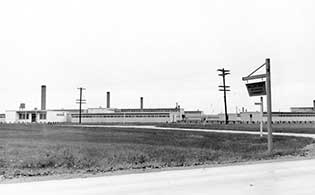 There was nothing scenic about the setting–a vast farm field with drab buildings plunked down along dirt lanes. (Photo courtesy of U-M’s Bentley Historical Library.)

To cope with the student surplus, the University built or leased three major projects. Closest to Central Campus was the Veterans Emergency Housing Project, a ragtag collection of tin-can quarters hurriedly erected at Hill and Division, next to the Coliseum. University Terrace was the plushest of the veterans’ quarters. Constructed just east of the old University Hospital and the School of Public Health, it comprised 276 apartments for married students.

The biggest project was Willow Village at Henry Ford’s Willow Run Bomber Plant, about eight miles southeast of the Diag. The University leased apartments and dormitories from the federal government, which had built the project to house personnel at the massive facility. At its peak, the factory employed more than 40,000 workers and rolled out one B24 Liberator bomber per hour on its mile-long assembly line. (See a vintage clip of The Willow Run Story.)

There was nothing very collegiate about the grim industrial setting that Gartner and his friends would call home. It was a vast farm field with drab buildings plunked down along dirt lanes. The Willow Village quarters housed 1,300 married students, 1,500 single men, and 200 coeds. Single veterans lived in two-story dormitories, ate in the chow hall named West Lodge, and competed for the attention of the few women on site. PXes supplied cigarettes and other sundries. 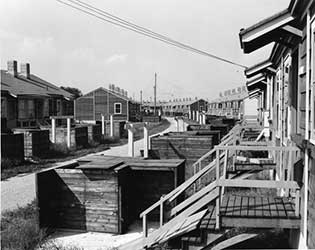 In these apartments, veterans’ families began new lives in the postwar era, and helped to create the Baby Boom. (Photo courtesy of U-M’s Bentley Historical Library.)

Married students and young families were assigned to small apartments in a separate section. Couples without children lived in the no-bedroom “zeros.” If you had a baby you graduated to the one-bedroom model. Heat came from coal, insulation was poor, and the ice box was just that: an ice box.

Hardly anyone had a car. A fleet of buses transported GIs back and forth to campus. The last bus left Ann Arbor in early evening, curbing any real possibilities for nightlife in town. As a result, Willow Village became a campus-away-from-campus, its own little universe for a brief moment in time.

Gartner’s memories are vivid as he describes his core pack of six “lifetime friends.” Norman LaPeters was the outgoing one from New York City. A joker, likable. Ken Beaudry was brilliant, the chemical engineer with all the brains. Ben Gross came from money. He got a car in 1947, and the guys would pile in for rare trips to Ypsilanti. George Georgiou was a great friend who would be Gartner’s roommate after graduation. And Glenn Siewert was the best-looking one, an “idol” and a man of few words. He’d been a pilot in the Air Force and returned to service right after graduation.

Gartner was the de facto ringleader. He was athletic, social, a matchmaker of sorts. But when the girl he liked, Marjorie Kirk, seemed enamored of Siewert, Gartner made his move. “I smiled a lot,” he says of wooing the woman who would become his wife. Kirk was a nursing student who served potatoes and gravy in the Village chow hall. “She always gave me an extra helping.” 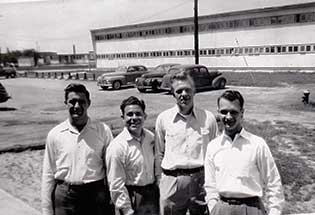 Ever hopeful, some of Gartner’s friends linger near the female dorm at the Village. From left: Ken Beaudry, Norman LaPeters, Ben Gross, Glen Siewert. (Image courtesy of Gartner.)

Gartner, now living in Illinois after a long career at International Harvester, has stayed in touch with the gang from the second floor of Dorm 1. “We came from all over to go to U-M, but we were bound together by a common heritage — the fact that we were all involved in a situation where our lives were at stake. That’s a terrific bond. I can’t even describe to you how it is.”

One by one, the members of Gartner’s pack have passed away or become too ill to correspond — except for LaPeters, BBA ’49. Through the wonder of technology he and Gartner remain in constant touch, engaging in their daily “bull sessions” by email now.

Army veterans Ron Russell, BS ’49, and Julian “Chick” Frey, BS ’48/MBA ’49, arrived at Willow Village as friends already. They’d been classmates at Flint Junior College before the war. They were both married by the time they arrived at the village and each had their first child while living at Willow Run. Like Gartner and LaPeters they remain connected through family and mutual friends. 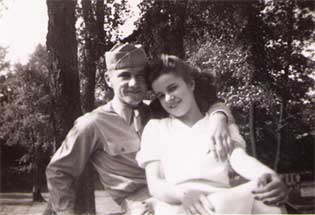 Chick Frey and his wife, Konnie, had their first child while living at Willow Village. (Image courtesy of Frey.)

“It was a good atmosphere at Willow Run,” says Frey, who spent 18 months in Europe fighting with the 99th Infantry Division. “We were a unique group, not the typical high school students going into college. We’d been through some hard training. I guess you could say we were serious. When you’re out there in the service facing a few bullets you get serious in a hurry.”

Like many veterans in Willow Village, Frey took an accelerated course load, attending classes year-round. His degrees in engineering and business kept him in suburban Detroit after graduation, opening doors at Ford, Chrysler, and finally GM, where he spent the bulk of his career. But he worked “extra hard” to get there. Returning to the classroom was challenging after 33 months in the service.

“Of course we were a little rusty,” he says. “I don’t remember having much of a social life. Everyone was in the same boat; we’d lost a lot of time in the war and were trying to catch up. We wanted to support our families and get on with things.” 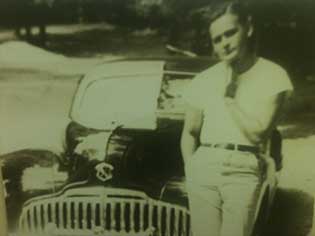 Ron Russell was among the few veterans at Willow Run to have his own car. (Image courtesy of Russell.)

Russell also had little time – and no disposable income – to engage in the carefree shenanigans one generally associates with the college years. “I had a wife and homework to do,” he says. “I took the bus in early and came home late. I went to the engineering building and that was about it.”

Russell always had aspired to a U-M education, but couldn’t have done it without the GI Bill. “I didn’t have any concept of doing anything except going to work in a factory,” he says. But after college he went on to design factories for Ford, Chrysler, GM, and Nissan.

Though the conditions at Willow Village were austere at best, “We thought it was great,” says Russell, who now lives in Florida. “Those were fun years. Happy years. We painted our place. We had a little coal bin right outside the door. The stove made the house smell good.”

And like any good engineer-in-training, when the icebox continually overflowed, Russell “drilled a hole in the floor and put a funnel under there.”

As legacies go, the bomber plant at Willow Run always will stand as an example of manufacturing excellence based on its size, innovative design, massive work force, and production capacity. Fundraisers recently completed an $8-million campaign to preserve part of the plant as the National Museum of Aviation and Technology at Historic Willow Run. 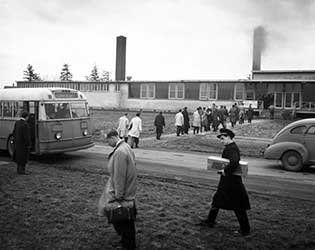 U-M officials scrounged a fleet of 30 commuter buses from as far away as Oak Ridge, Tenn., to transport GIs back and forth to the Ann Arbor campus. (Photo courtesy of U-M’s Bentley Historical Library.)

But for a few years in the late ’40s the now-historic site was simply a place that a tight-knit group of American GIs called home.

“There was some benefit in us being so close together,” says Frey. “You could hear babies crying next door and stuff like that – you had to get to know each other. It would have been far different if we were in town in separate apartments.

“We had fun keeping track and staying in touch with our friends; they were all fine people and were very successful in their endeavors.”

LaPeters cites the “great allegiances” he made at Willow Village and credits the business school for launching his successful career in accounting at CHF Industries. His memories revolve around bridge games till 3 in the morning, motorcycle runs on the back of a friend’s bike to the White Castle in Ypsilanti, and Wolverine football games at the Big House (tickets were included in the cost of tuition). He didn’t date much, however, since there were so few women living at Willow Run.

“I’m disappointed I don’t have any real knowledge of what campus living is like,” he says. “I imagine it has to be great fun. And I missed out on all those wonderful girls.”