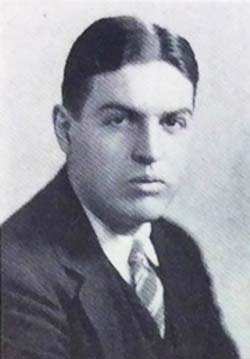 The University of Michigan Chimeswas a little student weekly that published sketches, essays, poems, and literary reviews. Nobody paid much attention to it, at least not until a senior named Neil Staebler took over as editor in the autumn of 1925.

That was like a boy raised by Barnum & Bailey who wasn’t a fan of the circus.

Yost was widely seen not only as a great coach but also as a great man, a builder of character in the young and a champion of athletics for all — all men, anyway … well, all white men. (The son of a Confederate soldier, Yost allowed only a small handful of black athletes to play for Michigan, and only in sports less conspicuous than football.)

Now Yost was also Michigan’s athletic director. In the fall of 1925, at the age of 54, he was working crazy hours and running all over the state in pursuit of a huge new achievement.

Most people in town were rooting for him. Neil Staebler was not. 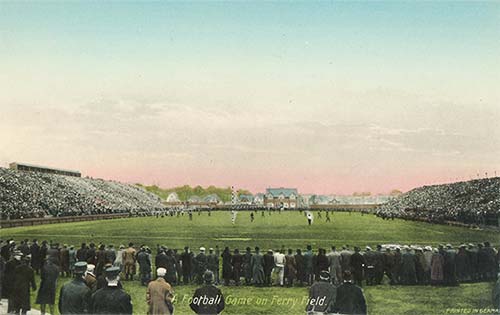 Michigan students, Michigan alumni, and people with no direct connection to the school mobbed home games. In 1922, half the entire student body of 11,000 went to the Ohio State game — in Columbus. When Michigan played at home, special trains discharged carloads of fans from across the Midwest, and every Ann Arbor bedroom was crammed with extra cots, bunks, and blankets.

But Michigan’s Ferry Field, beloved as it was, held only 37,000 spectators in the early 1920s. The demand for seats was estimated at twice that number or more, and a cry was rising for some solution to the uproarious demand for tickets.

At first the University’s governing Board of Regents (some of whom requested up to 60 tickets a game for family and friends) said no to any new stadium; the cost would be too high. Maybe more stands could be built at Ferry to meet the need. They were — and the demand for tickets only grew.

When the Wolverines compiled an 8-0 record in 1923 and were named national champions, powerful alumni began to call for construction of a new stadium to seat up to 100,000 fans.

Yost on the Stump

Coach Yost had an idea to defuse the regents’ fears about the prohibitive cost of a new stadium. To fund construction, he would sell 20-year bonds with a guarantee of two season tickets to every buyer. No student would pay extra. No one would be asked for a donation. No new taxes would be levied. And Yost said football revenue would pay for a grand new complex for other sports and intramurals.

It was brilliant. Alumni were delighted. Students were ecstatic. Marion LeRoy Burton, the University’s popular president and a great friend of Yost, appeared to be on board. The Board in Control of Intercollegiate Athletics (where Yost enjoyed a strong majority of alumni and students) sent it up to the regents.

Then, early in 1925, President Burton, only 50, died unexpectedly of heart disease. 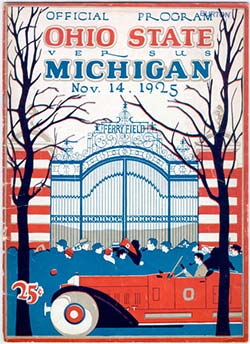 Burton’s interim replacement was the scholarly Alfred Henry Lloyd, dean of the graduate school, a professor of philosophy. Dean Lloyd was not the friend of football or Fielding Yost that President Burton had been, and he called a screeching halt to the stadium charge. He appointed a faculty committee headed by Edmund Day, dean of the School of Business Administration, to study the entire question of athletics at Michigan. After the Day committee had studied and deliberated, Lloyd said, a thoughtful decision about any new football stadium might be made.

At this, Yost went into overdrive. All that spring and summer he gave speeches from Monroe to Marquette to Kalamazoo, pleading his case to members of Rotary Clubs, Kiwanis Clubs, Chambers of Commerce. On the faculty there might be snooty naysayers, but among outstate alumni and just plain fans, he had thousands of allies. Michigan was behind in the stadium race. The state had to compete.

“Whether the stadium is crammed to capacity or almost empty,” he told audiences, “the desire to win by students and alumni is present just the same. It will be a sad day for the youth of America when they no longer want to win. They will become a limp, listless set of boys and girls.”

Yost came off the stump to start the 1925 season. The Day committee met, asked questions, met some more. The regents appeared to be coming around. “You made a mistake when you went in for football instead of the law,” Regent James O. Murfin wrote to Yost. “As an advocate either orally or in writing you have no equal.”

That was when Neil Staebler, 20 years old, became the editor of Chimes.

As his classmates marched down to games at Ferry Field, waiting and watching for what now seemed all but inevitable — an announcement that the Yostmen would soon play in America’s greatest stadium — Staebler got in touch with Robert Cooley Angell, a sociology professor who was barely out of graduate school, one of the youngest members of the faculty.

Knowing the impossibly long odds, and the poisonous treatment they would get from their friends, Staebler and Cooley decided to object.