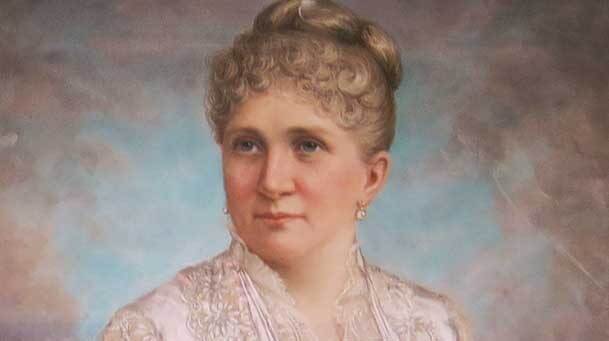 The name on the first women’s dorm

Without checking Wikipedia, let’s see how you do in this round of University of Michigan trivia (answers below): 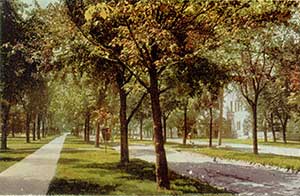 This postcard of State Street depicts Newberry Hall (home to the Kelsey Museum of Archaeology) between the trees. (Image courtesy of U-M’s Bentley Historical Library.)

The notion of U-M dormitories for women arose in earnest in 1906, when a number of forward-thinking alumnae proposed that Michigan follow the examples set by women’s dorms at the Universities of Chicago and Wisconsin.

Faculty and administrators were dubious. Rent on University “cottages” for women, said one professor, was likely to exceed the rent charged by the owners of Ann Arbor’s hundreds of rooming houses, where most students then lived. And “the University would be responsible for the conduct of the girls.”

The idea was tabled, but by 1908, women students themselves were pushing it, though they had even less interest in supervision than the faculty did.

After four years in rooming houses, a senior woman said, “We realize how few close friendships we’ve been able to make with many fine girls whom we know of, and the question arises whether it would not be possible to mass the majority of the girls together in halls…

“Of course we would not like to give up the unrestrained life that we lead now and be limited to the old-fashioned dormitory system,” she continued. “None of us would agree to that, for we feel too strongly how much such independence has taught us to be true women.”

Soon, administrators and faculty came around. But, as usual, the question of money got in the way.

Enter Helen Newberry. Actually, it was her exit that started things in Ann Arbor

Mrs. Newberry’s demise at the age of 77 on Tuesday, Dec. 17, 1912, was reported in the Detroit newspapers as if it had happened at Downton Abbey.

There was little warning of the end, and no pain or struggle. Mrs. Newberry had spent Monday shopping with members of her family. Tuesday morning, while taking breakfast in her room, she was suddenly stricken, and the end came before her maid could summon assistance. 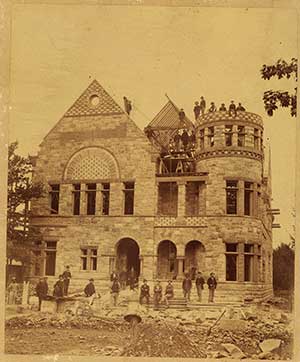 Construction of Newberry Hall in 1888. The building was the headquarters of the U-M Students’ Christian Association. Later it was adapted as a museum, and in 1953 it was named the Francis W. Kelsey Museum of Archaeology. (Image courtesy of U-M’s Bentley Historical Library.)

Mr. Newberry, an early graduate of U-M, had made his money — a great deal of it — by the manufacture of railroad cars in the era when railroads dominated the American economy. He was Abraham Lincoln’s appointee as Michigan’s provost-marshal (head of military police) during the Civil War. Just before the war he had married Helen Handy, the daughter of a Cleveland banker, and after Appomattox, he proceeded to amass a fortune from Detroit to the Upper Peninsula, where he built the Detroit, Mackinac, and Marquette Railroad.

After Newberry’s death in 1887, his widow, Helen, continued her husband’s support for the development of Detroit’s Grace Hospital. For the next 20 years she served as president of the hospital’s Board of Lady Managers, which essentially ran the place on behalf of its governing board. She was the key figure behind the Grace Hospital Training School for Nurses, and she gave the money for the handsome Helen Newberry Nurses Home, one of the buildings that would later constitute the sprawling Detroit Medical Center. It’s now on the National Register of Historic Places.

She also gave $18,000 as the lead gift for a fund to build a headquarters for the Students’ Christian Association of the University of Michigan. The Romanesque pile on State Street, named Newberry Hall to honor Mrs. Newberry’s husband, became the University’s property in the 1930s. Since 1953 it has housed the Francis W. Kelsey Museum of Archaeology. 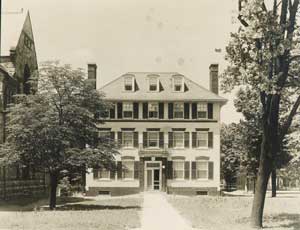 Kahn & Wilby were the architects behind the Newberry Residence, built in 1915. G.E. Christman Co. was the contractor. This is the residence’s East facade soon after completion, looking out over a wide lawn onto State Street and Angell Hall. (Image courtesy of U-M”s Bentley Historical Library.)

When Helen Newberry died, her estate had an estimated worth of $3 million, an enormous figure in 1912. Most of it went to her three children, the most prominent of whom, Truman Handy Newberry, not only had made his own pile of money — he was a founder of the Packard Motor Car Company — but also served as secretary of the U.S. Navy under Theodore Roosevelt.

To honor their mother, Truman Newberry, with his brother, John, and his sister, Helen, gave the money needed to build the Helen Newberry Residence. Architects Albert Kahn and Ernest Wilby of Detroit built the residence for a cost of $75,000. Doors opened in 1915 and the building remains an all-female residence today.

The tale would not be complete without noting that in 1918, Truman Newberry was elected to the U.S. Senate, then investigated under the Federal Corrupt Practices Act for spending $100,000 to defeat the automaker Henry Ford, his opponent in the Republican primary. The statute said no Senate candidate could spend more than $10,000 on his own campaign. Newberry was convicted, but he appealed and won in the U.S. Supreme Court — on a technicality, since he had spent the money in a primary campaign, not the actual election campaign. The Senate seated him but expressed its disapproval of such lavish spending. The bloom was off Newberry’s new career, and he quit the Senate in 1922.

By then, several cohorts of women had lived in the long stucco “cottage” on State Street named for his mother. So it happens that a century later, the name “Newberry” is remembered more for the housing of young women at U-M than for the career of a high-spending politician.

Sources include the Michigan Daily, the Ann Arbor News, and the Detroit Free Press. Top image is a cropped photograph of the Newberry portrait hanging in the residence.