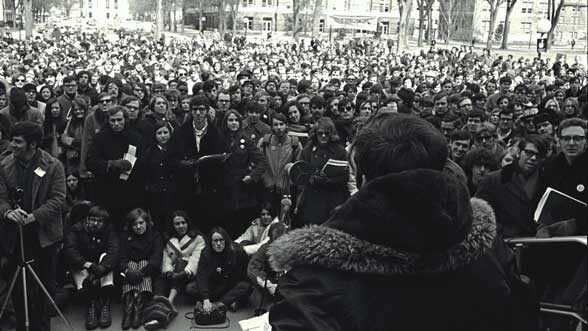 Teach-in + 50: End the War Against the Planet
March 27-28, Angell Hall
“We believe climate change is one of today’s most pressing issues,” says Theresa Ong, a graduate student in ecology and evolutionary biology. She and her colleagues are calling upon U-M faculty and students to once again take up the banner of sociopolitical activism, just as they did in the civil rights and peace movements of the 1960s and the anti-apartheid movement of the ’80s and ’90s.

“We’re trying to recall the strength that campus activism has had in the past,” says Ong, “particularly at the University of Michigan. We want to reduce the despair that leads to apathy and remind students and faculty that we have the privilege and power to learn, educate, and instigate meaningful change.” 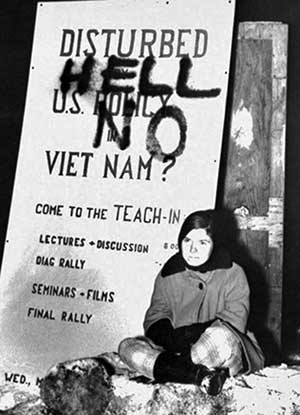 The format of the teach-in encouraged students to speak their minds, debate professors, and question authority. (Image provided by Alan Glenn.)

Fifty years ago the idea that sociopolitical change could emerge from educational institutions was highly controversial. In early 1965, when a small group of conscientious Michigan professors announced they were going to hold a teaching strike and cancel classes for one day as a protest against President Lyndon Johnson’s escalation of the fighting in Vietnam, the resulting backlash was swift, loud, and vituperative.

Former U-M professor and sociologist Jack Rothman recounted the events in a 1972 article he wrote for the journal Social Theory and Practice:

“An announcement had gone out to the press and the kind of reaction some of us had expected was not long in coming. The strike was publicly condemned by the president of the University. A resolution of censure was introduced in the state senate. Governor Romney called for disciplinary action. Newspaper editorials throughout the state lashed out at this irresponsible and unpatriotic band of ivory tower intellectual troublemakers. Deans and department chairmen called in those of us who had given strike pledges to consider together the morality and legality of meeting assigned classes. Most disheartening of all, faculty and colleagues closed ranks in opposition. A climate of hostility and tension pervaded the campus and the avalanche of criticism continued unabated. Somehow we had set off a bombshell.”

The fury and hostility directed against the strikers caused many in the group, especially those without tenure, to have second thoughts. As the loose coalition threatened to dissolve, an emergency all-night meeting resulted in a new plan: Instead of canceling their regular classes, the professors would hold lectures and discussions about Vietnam outside of conventional hours. In fact the program would run all through the night, from 8 p.m. on March 24 through 8 a.m. of March 25.

The faculty group called their brainchild a “teach-in,” after the popular and effective sit-ins that had been a staple of the civil rights movement for many years — and it was an instant success. Suddenly the tide of public opinion turned. President Harlan Hatcher applauded the switch and offered the University’s full support. Women students (most of whom had curfews in those days) were granted permission to stay out all night so they could attend. A flood of additional faculty pledged to participate. Student and civic groups offered assistance. University regents, state legislators, and newspaper editorialists reversed course and added their voices to the praise.

The night of March 24, 1965, more than 3,000 people packed the auditoriums of Angell Hall to listen as learned experts presented a picture of the situation in Vietnam — a country that many attendees had hardly heard of — entirely at odds with that being put forth by the U.S. government. The fact that the proceedings took place outside of normal class hours gave many students the courage to speak up and debate openly with their professors. Eyes were opened not only to what was really taking place in Southeast Asia but also to an exciting new approach to education.

“A group of University of Michigan professors protesting U.S. policy in Vietnam showed Thursday that retreat can be turned into triumph,” the Detroit Free Press reported.  “The Wednesday night assembly may well have been the largest bull-session in U.S. college history and to many students, it was a living example of what a university is all about. This was no panty-raid lark. Some kooks and a handful from the left and right fringes were attracted, but for the most part the session was peopled by students with a strong yearning to learn and an almost desperate desire to overcome helplessness with action.”

Almost immediately teach-ins began to appear on other campuses and the movement against the war kicked into high gear.

“The first teach-in’s historic signiﬁcance is difficult to over-state,” says Professor Howard Kimeldorf of U-M’s Department of Sociology. “It created a model for locally based, active learning that proliferated across the country and was later applied to issues other than the Vietnam War. Long before the Internet, it demonstrated that local citizens, drawing on their own expertise, could provide an alternative and independent source of information about pressing matters facing our nation. It fueled demands for accountability from government sources and a mostly uncritical corporate-dominated media. It reminded us all that, in the modern information age, knowledge truly is power.” 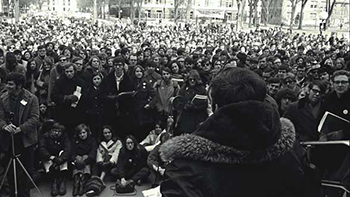 That’s why Kimeldorf and his colleagues have prepared a “commemoration through emulation” called Teach-In + 50: End the War Against the Planet. The new teach-in will focus on climate change, which the organizers regard as one of the most serious threats now facing the world.

Explains Theresa Ong: “Teach-In + 50in many ways echoes the same moral issues students expressed when analyzing the imbalance of power and overexertion of force used in Vietnam. Fifty years later, we face the same power imbalances, though the face of that power may have changed. War, inequality, poverty, and hunger are intricately tied to the demands we as human beings place on the planet. To solve the problem of climate change we need to address the complex socioeconomic issues that are tied to the ecology of our Earth.”

Teach-In + 50kicks off at 4 p.m. on Friday, March 27, with a panel discussion in Angell Hall Auditorium A. Participants include former U-M faculty members William Gamson and Marshall Sahlins, who were both part of the planning committee for the original 1965 teach-in. Today Gamson is a professor of sociology at Boston College; Sahlins is professor emeritus of anthropology at the University of Chicago. They will be joined by author Amy Goodman, host of the award-winning independent news program “Democracy Now!”

Later that evening a series of discussions will focus on the science and politics of climate change, led by faculty from U-M’s School of Natural Resources and Environment (SNRE). Prominent environmental activist Bill McKibben will appear via live feed. Friday night’s events will continue at 10 p.m. with an open meeting sponsored by Science for the People, a student group with links to the anti-war movement of the 1960s. In the spirit of the original teach-in, no end time is specified.

“This is an open, public event. It is not limited to members of the University community. Anyone interested in climate change – which should be all of us – is welcome to attend and participate. Our speakers are experienced in addressing general audiences; you will not be weighed down with technical jargon or endless tables and charts. The teach-in is meant to raise awareness of climate change and to expand the ongoing conversation about possible solutions. We hope you will add your voice to that conversation.” — From the Teach-in + 50 website

The organizers of Teach-In + 50did consider programming panels, discussions, and speeches throughout the night, as was done in 1965, but ultimately decided against it.

“Because this is partly a commemoration, many of the guests would not be able to attend an all-night event,” explains Julie Herrada, curator of the University’s Joseph A. Labadie Collection. “Also, the post-9/11 environment restricts 24-hour access to most campus buildings. We may have been forced to find an off-campus venue, which would then have destroyed the sense of place that we hope to engender.”

Teach-In + 50picks up again Saturday morning with a series of discussions on potential solutions to the problem of climate change, from the global to the local levels. Participants include political activists and Michigan alumni Tom Hayden, ’61, and Harvey Wasserman, ’67, among other scientists, authors, and experts.

The event concludes Saturday afternoon with a series of student-run workshops aimed at promoting a more responsible approach to the environment.

“I’m inspired by the collaboration of many diverse student groups on Teach-In + 50,” she says. “The Native American Student Association and SNRE Envoys are two examples of student groups focused on diversity that are helping us plan the teach-in. Climate change is a truly uniting issue that affects people of all races, ethnicities, gender, and sociopolitical backgrounds.”