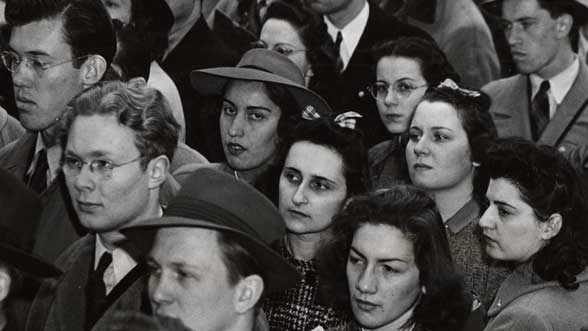 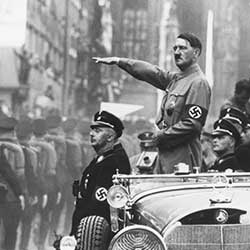 In spring 1940 the full fury of a second world war was imminent.

You could headline this one “Idealistic Michigan Students Work for Peace” or “Communists in Our Midst.” Either would carry a dose of truth.

The episode started with a peace rally on the steps of Hill Auditorium on April 19, 1940 (above).

It was a springtime teetering on the brink of terror. Half a year earlier, Nazi soldiers had overrun Poland, then paused for the winter. Now the newspapers were full of foreboding: With the spring thaw, would Hitler now launch armies to his west, against France and Britain? The full fury of a second world war was imminent.

The U.S. was still neutral, the public divided. Many thought America had been duped into World War I — “the war to end all wars,” it had been called — and were determined to stay clear of this new bloodbath. Many others saw Hitler as an existential threat to the U.S. and urged all possible aid to Great Britain, still standing in the war with Germany. (Joseph Stalin, the Communist dictator of the Soviet Union, had cut a deal with Hitler; for the time being, it was neutral.)

The campus was as divided as the country. 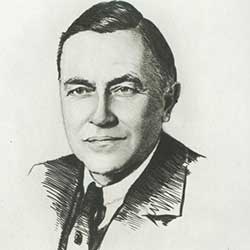 In Ann Arbor, the loudest cries to stay out of the war came from U-M’s chapter of a left-wing organization called the American Student Union (ASU). Its members were the key sponsors of the April peace rally at Hill. Their slogan was: “The Yanks Are Not Coming!” A crowd of 3,000 heard the speeches.

It’s doubtful that Alexander Grant Ruthven, U-M’s president, was among them. But he didn’t like what he heard about the rally, and he didn’t like the ASU. Its stand on the war contradicted Ruthven’s own. (He supported aid to Great Britain.) Worse, in his mind, was that the ASU had strong ties to the American Communist Party, which had come out against aid to Britain — a stunning turnabout that fell in line with Stalin’s neutrality deal with the Nazis.

So Ruthven issued a strong warning in his address at Spring Commencement: “Michigan welcomes only students who are convinced that democracy is the ideal form of government for a civilized people. She will not be confused by sophistries built around meaningful but ill-defined phrases such as ‘freedom of the press’ and ‘freedom of speech,’ but will deal firmly, without fear or favor, with subversive or so-called ‘fifth column’ activities.”

Apparently Ruthven believed ASU students at Michigan were “fifth-columnists” — sympathizers if not outright agents of Stalin and the Communist Party.

So he proceeded to expel 13 students, at least 10 of whom were ASU members. And he warned the editors of the Michigan Daily —which had editorialized in favor of ASU’s peace stand — not to publish anything about the suspensions until Ruthven said it was OK. He specified no reasons for the suspensions, other than to say they weren’t political — an assertion that drew loud catcalls from his critics.

Now Ruthven, as expected, had a free-speech fight on his hands.

After the summer break, while Hitler consolidated his hold on Europe, civil libertarians across the U.S. spoke out for the suspended students and the Daily. 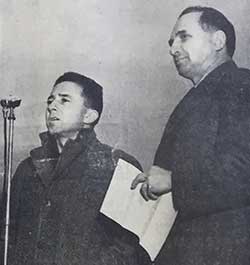 Hugo Reichard, one of the expelled students, and Detroit labor attorney Maurice Sugar at the “Open Hearing” at Island Park, November 9, 1940. (Image from the Michigan Daily.)

On campus, opinions were as mixed about the expulsions as they were about the war.

The all-student Men’s Judiciary Council applauded Ruthven, saying student radicals had brought the wrath of the state legislature down on U-M all too often. If Lansing punished U-M by cutting funding, it could mean higher tuition for all. So Ruthven was right to crack down on the “two percent” of students who were Reds, the Judiciary Council wrote in a Dailyeditorial. “If the reasons are political, as is charged, we nevertheless back [Ruthven’s] move wholeheartedly as being necessary to the best interests of Michigan and ninety-eight percent of her students.”

The ASU retorted: “From this premise the council and the University is unequivocally led to the dangerous doctrine that the interests of the majority are best served by the suppression of a minority … A minority does not have the right to steal, slander, murder, but it has a right in an allegedly democratic society to think, act, and speak freely.”

In October Ruthven tried to clear the air with a new statement. It was a delicate exercise in hair-splitting.

“The decision of University authorities that these students were not good University citizens was in every case based upon activities which were deemed disruptive of good order in the University,” he said. “No inquiry was made as to membership in organizations or as to political beliefs…

“The viewpoint seemed to be that, since they were avowed ‘liberals,’ their activities could not be questioned without infringing on ‘academic freedom.’ Two or three asked for a public trial. This request was refused as contrary to the practice of the University and against the best interests of its students.” 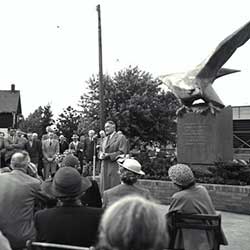 In June 1950 Ruthven spoke at the dedication of a World War II memorial at Michigan Stadium.  (Image courtesy of U-M’s Bentley Historical Library.)

The students’ backers responded with their own “open hearing” on the baseball field at Island Park. It was November by now, but 500 turned out to hear professors, civil libertarians, and union leaders excoriate Ruthven and call for the students to be reinstated.

“There is a small group at the University that keeps stirring up this matter of the rejected students,” Regent John D. Lynch of Detroit told The Detroit Free Press. “This is a closed incident with me … I believe especially in such a time as this, that un-American tendencies and annoyances should be kept at a minimum.”

Now the Dailycame under fire, too.

For several years the student paper had been attracting notice, pro and con, for its support of peace activists, and the left in general. Now it published a letter from the ASU quoting the left-leaning Nationmagazine, which, in a story about the suspensions, had portrayed U-M’s Board of Regents as corporate stooges.

That was too much for the Board in Control of Student Publications, which imposed a one-week suspension from the staff on the two top editors, Hervie Haufler and Alvin Sarasohn.

Those two beat a retreat. They apologized to Ruthven for publishing the letter; said the attack on the Regents was “entirely foreign to the viewpoint of the Daily’seditors,” and complained: “We do feel that some sort of disciplinary action could have been taken without subjecting us and the Dailyto a lot of unhelpful publicity, and without making us the unwilling dupes of the many ‘civil rights’ groups seeking to find an issue in such cases.”

It more or less ended there. Seven of the expelled students transferred to other schools — “with our help,” Ruthven said. In 1941, as the U.S. went through the agonizing slide toward war that concluded with the attack on Pearl Harbor, and the American Student Union self-destructed, torn between a communist wing that supported Stalin and a socialist wing that didn’t.

Not long after, peaceniks and their opponents alike were pretty much all in uniform.