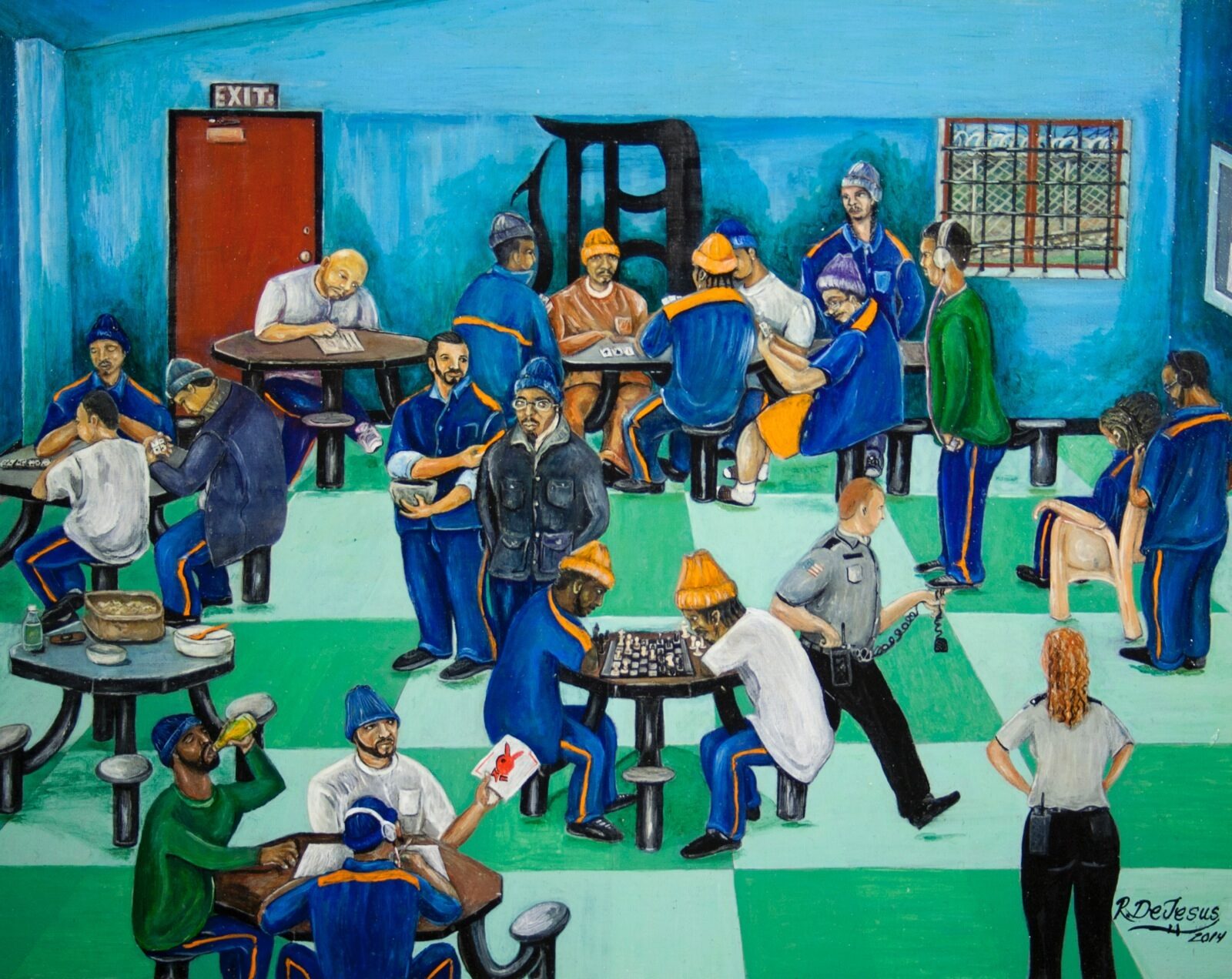 At an early point in her career, accomplished painter and award-winning educator Janie Paul contemplated her motivations as a creative person.

“I remember literally sitting at my desk at one point and thinking, ‘Well, should I be an artist?'” says the Arthur F. Thurnau Professor of Art in the Penny W. Stamps School of Art and Design, and professor in the School of Social Work. “‘It’s kind of selfish to be an artist,’ I thought, ‘but I really like making art. Or should I fight to have other people have the opportunity to do this?'”

Paul would come to answer that question in a most extraordinary way.

For more than two decades she has partnered with U-M professor Buzz Alexander in the Prison Creative Arts Project (PCAP). Alexander founded PCAP 25 years ago to foster original creation in the arts by people in Michigan correctional facilities, juvenile facilities, urban high schools, and other communities statewide. He is an Arthur F. Thurnau Professor of English Language and Literature in the College of Literature, Science, and the Arts.

In 1996 Paul and Alexander launched the Annual Exhibition of Art by Michigan Prisoners. They have traveled to some 30 prisons statewide to collect art for the exhibition. From 442 visitors in 1996 to 4,000 last year, the exhibit has grown into a life-changing phenomenon for hundreds of incarcerated citizens.

Paul is the senior curator of the annual exhibition and is currently working on a book about prison art. Her focus is the capacity of visual meaning-creation as a vehicle for social change. Alexander is the author of Is William Martinez Not Our Brother? Twenty Years of the Prison Creative Arts Project.

View in a larger format.

This year, as Paul and Alexander celebrate the 20th anniversary of the annual exhibit and 25 years of PCAP, LS&A recognizes their work with a Lifetime Achievement Award.

The following Q&A traces the history of this effort by these artists-teachers-activists. In addition, Michigan Television produced the longform documentary (above) about the groundbreaking project.

Katherine Weider: Buzz, the Prison Creative Arts Project began with a theater workshop in the Florence Correctional Facility for Women. What was the impetus behind this idea? 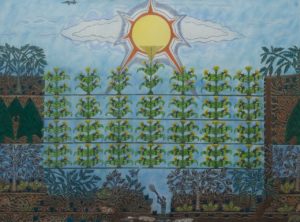 Buzz Alexander: It started with two lifers, Mary Glover and Joyce Dixon, who were enrolled in University of Michigan classes through prison and wanted to take my English class. One of the U-M students who was working with them suggested that she and I go out to the prison and talk with them. We drove up to Coldwater and met with Mary and Joyce. We talked about theater and they were so enthusiastic, we decided to do a workshop with a larger group of women in the prison. For six or seven weeks, we played and improvised and created stories.

I knew next to nothing about prisons and could not in my wildest imagination have predicted that this first meeting would lead to PCAP and affect the lives of thousands of urban and incarcerated youths, prisoners, and U-M students.

KW: How did it grow?

BA: Well, one thing led to another and soon I was creating classes through the English Department that brought U-M students into the prisons to do writing and theater workshops with groups of men, women, and adolescents.

KW: So students have been involved from the beginning? 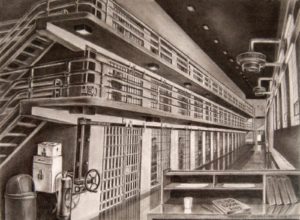 BA: PCAP has primarily been a student organization. Students initially got involved through classes they took with me in which they did theater or writing workshops in prisons and juvenile facilities. Or they signed up for Janie’s “Art Workshops in Prisons” class at the Stamps School of Art & Design. They became so engaged with this work that they continued to volunteer doing the workshops on their own time.

KW: Your first exhibit of prison art was in 1996. How did that happen and what’s changed since then?

Janie Paul: Buzz and I met at an artist retreat in 1992 and eventually I moved to Ann Arbor and began teaching at the Stamps School. Buzz asked me to show slides of my artwork to the men in his theater workshop at Western Wayne Correctional Facility in Plymouth. They asked such deep and probing questions and gave me such good feedback. So of course when they asked me to facilitate an art workshop I said yes. Just a little bit after I started that workshop, Buzz and I decided to do an exhibit. We knew there were prisoners making art — that there were artists around the state — and we wanted to see what we would find.

So … what’s changed? The number of artists has grown tremendously over the last 20 years. The culture of art is strong in Michigan prisons. And it’s not just among the artists. Artists in prison have always held some respect. But I think that respect from prisoners and administrators has grown since the art show has brought such widespread acknowledgment and praise from the general public. 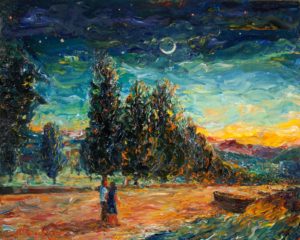 Season of Love by Oliger Merko

I think the art has changed too. There are conventions and traditions in prison art, driven by the prison economy. Prisoners may make money by creating greeting cards, producing portraits of family members, and tattooing. So artists in prison have spent most of their time working with certain aesthetic conventions around these forms.

Our show encourages people to also make art that is more personal. So over the years, the art has grown away from these more commercial motivations into more idiosyncratic personal work. Most artists do both: one style to make money, and the other to be more expressive and idiosyncratic.

BA: When we started this work, we based it on very basic human principles: respect for each individual, belief in their potential, and belief that change is possible. Most importantly, we believed that each person is more than the worst thing they have done. So, after 20 years, another thing that’s changed for us personally is that we’ve witnessed proof that these principles work.

JP: For most artists in prison, developing an art practice is concurrent with deep changes in themselves as human beings. We have heard and seen over and over again how, as their art practice deepens and develops, they become more self-confident, more at peace, and more generous.

KW: People often think of art-making as a very individual activity, yet you have spoken of this work as a community-building project.

Bound by Circumstance by Joi Jimanaroj.

BA: Everything we do for the art show is based on building relationships with the artists and the prison administrators. We build community by being as inclusive as possible and by maintaining contact throughout the year. Each artist receives a letter in the fall asking them to submit work. We visit each facility and have individual conversations with each artist. We videotape the opening reception and each piece in the show. That video is sent to each prison where it is viewed over closed-circuit TV or in small groups of artists.

This is a tremendous piece of art education and community-building. Prisoners, who can’t write to each other across facilities, get to see what each other is doing and are inspired by the work they see. After the exhibition, each artist receives a package from us that includes comments from the public comment book, publicity materials, and a list of all work.

Money from sales of their work is deposited into their account. This money allows them to order more materials and they are inspired to start working for the next show. Wardens and other prison administrators often come to the show and are appreciative of both the collective effort and the effort of individual artists. 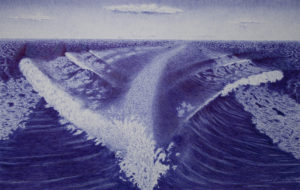 JP: The heart of the process is the selection trips where we visit each facility and collect the work. This is the moment where we get to meet each other face to face. Buzz and I have built relationships with people who have been in the show 20, 15, 10 years. We are inspired and in awe of people who have maintained their spirit and their dignity through 30 or 40 years of imprisonment.

In turn, I believe they are inspired by our consistency and the hard work we do on their behalf. It’s a deep commitment we have made over many years. It’s this relationship that accounts for the power and impact of the project, I think.

Community is something that happens within the prisons as well. We’ve watched communities of artists form, with more experienced artists mentoring the less experienced. Some have even been able to start their own art classes inside.

BA: There’s also this incredible network of students, community volunteers, and ex-prisoners that have evolved with PCAP over the years. The work alters people’s lives, whether they’re inside or outside.

KW: As you reflect on the impact of the prison arts work, what stands out the most? 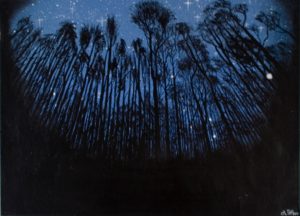 Father of Lights by A. Patton.

JP: The one-on-one contact we have with the artists is most memorable — as we talk intensely and give specific feedback on their work. There’s a mutual understanding and appreciation of one another. It’s a strange juxtaposition — we feel the power and excitement of new artistic possibilities amidst the backdrop of confinement and limitation that is the structure of prison life.

BA: For me, the most wonderful moments and the most meaningful are when we accept a person’s work for the first time and they float on air.

JP: Making art is a way to continuously redefine ourselves as people. That’s what we do as artists. And these artists are in a place that works to keep them defined — as a person who has committed a crime. So, it’s a hard environment in which to re-imagine oneself. So, for someone to be able to function on this level, redefining themselves through their art — it’s a huge accomplishment. It’s inspiring for those of us who work on the show and those who see the show, I think. That’s why it’s continued to hook us throughout all these years. And personally, as an artist, it has given me courage.

(Top image: “The Way it Is” by Rafael DeJesus. Larger image.)

KATHERINE WEIDER is an Emmy Award-winning producer and writer at the Stamps School of Art & Design. In 2006 she profiled Janie Paul and Buzz Alexander in her documentary, Acts of Art: The Prison Creative Arts Project, produced for Michigan Television, PBS.
Social
Share on: Share on Twitter Share on Facebook