The kitchen is open 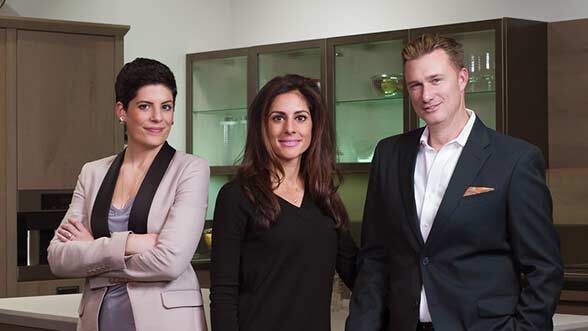 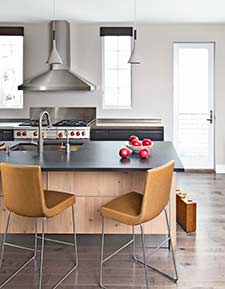 (Image courtesy of the Serrases.)

For sisters Niki Serras, BA ’06, and Alisha Serras, MSW ’06, the kitchen is not just the heart of the home. It’s the heart—and soul—of the breakthrough marketing strategy at the core of their business.

The daughters of Main Street Ventures restaurateur Dennis Serras grew up in some of Ann Arbor’s most successful restaurants—and their kitchens. So it seemed a natural extension of the family business when they decided to open their own venture in the form of a high-end European kitchen and bath design store in 2010.

But much of the feedback at the time was far from supportive: “Are you crazy?” “What are you thinking?” After all, the economy was still in a tailspin. And the fledgling entrepreneurs had picked downtown Birmingham, Mich., for the first U.S. outpost of Italy’s Scavolini by Cucina Moda (rough translation: Kitchen Fashion). Skeptics were quick to note that Scavolini Store Detroit’s modular, modern products seemed an unlikely fit for the Motown suburb, where decorating tastes tended toward the traditional. It was unclear how the sleek and luxurious imports would fare in the community. 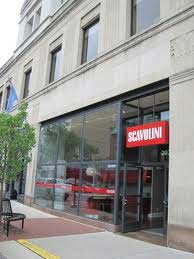 The sisters hit on a clever plan to introduce themselves to local consumers. They offered their Scavolini showroom to area nonprofits as a party venue. After all, the kitchen is everybody’s favorite hangout, the place in which party guests naturally congregate. And the Serras sisters had not one, but six kitchens to offer.

“What better place to have a party?” says Niki Serras. “Sometimes we would have to kick people out because they were so comfortable.”

At least once a month the Serrases opened Scavolini to organizations large and small: the Red Cross, the University Musical Society, the Boys and Girls Club of Troy, and Frame Your Face, among others. Sometimes 200 guests—potential customers, that is—would be in the store for hours at a time.

“That first year was just by sheer determination that we didn’t close our doors,” says Alisha Serras, whose husband, Brian Gamache, is the third partner in Scavolini by Cucina Moda.

Out of the frying pan … 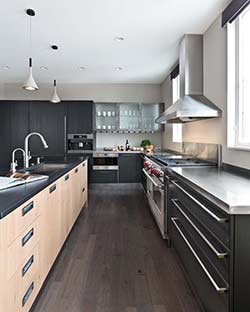 (Image courtesy of the Serrases.)

As word of mouth spread, sales increased and a growing base of regional clients signed on. The sisters began to see they weren’t as crazy or dumb as early reviewers claimed. In fact, one of their savviest deals came through a partnership with Huron Contracting in Ann Arbor, in which Scavolini offers custom-designed kitchens to condo buyers. The high-end finishes on the condos, which are located throughout downtown Ann Arbor, are a departure from the usual pre-set menu of interior design choices.

“You can walk to 10 of the job sites from Main Street,” says Niki Serras. “This is exactly the kind of thing we want to be a part of.”

It’s an exciting time to be in kitchen design, she notes.

“All of these little rooms, each with its own function, are being redistributed into the larger function of the home now. We do less and less formal dining or entertaining, and guests often are helping as we prepare a meal or during clean up. Because of that, the kitchen has become the focal point of the house and usually the room that is joined functionally and spatially with adjacent areas like the dining and/or living rooms.”

As a result, design options are evolving too, and “the kitchen sisters,” as Niki and Alisha Serras have come to be known, have a few suggestions for people embarking on a remodel: 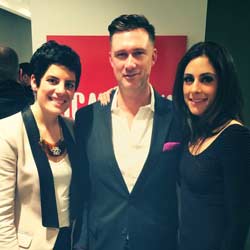 It was Alisha Serras who first started down the Scavolini path, when she wandered into a store during a vacation in Greece. She was fascinated by the company’s references to luxury car designers like Ferrari and Delorean when describing its high-end products.

“I became obsessed,” she says, noting she spent the next year researching options and getting serious about bringing Scavolini to Michigan with her husband and sister. “I was like, ‘I’ve never seen anything like this,’ and I didn’t think anyone around here had seen anything like it.”

Right around this time, the Scavolini family was seeking to expand into markets in North and South America. The Serrases seized the opportunity.

“I got in touch with [the CEO],” Alisha Serras says. “They had no plans to do anything in Michigan for sure. It was just timing. And we actually opened before the Scavolini flagship store in SoHo, New York.” 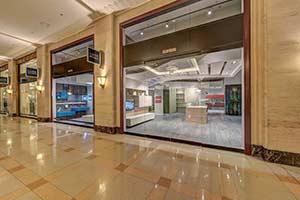 Running Scavolini is an ideal way for “the kitchen sisters” to remain close to their father’s business while forging their own path. Prior to opening the first store, Niki Serras was thriving in her work with the University of Michigan’s National Network of Depression Centers. Alisha Serras was partway through a doctoral program at Eastern Michigan University while working at U-M’s Depression Center.

Though each loved her work, the sisters loved the idea of working together more. Kitchen design was a shared passion that had long been simmering due to their father’s partnership in Main Street Ventures, which includes Ann Arbor’s Chop House, Gratzi, and Palio, as well as other endeavors in Michigan, Ohio, Maryland, West Virginia, and Florida.

From their civic booster mother, Ellie Serras, the sisters grew up learning how important it is to support local charities, small businesses, and downtown development. In addition, the Serras sisters say their work at the National Network of Depression Centers and the Depression Center, both at U-M, provided models on which to base an efficient organization that also supports the local community.

“When we joke about it being easier to work for our father I think we’re thinking what we want is for our company to be as successful as our father’s company,” Alisha Serras says. “That’s something I aspire to, and the bar is set really high. I like to believe that if we had gone into the family business we would have taken it to another level, but that’s my father’s dream.

“It’s our grit and determination to make our own business, and he is our greatest mentor,” she says. “To be able to do something and make him proud, but doing our own thing, would be our dream come true.”

Adds Niki Serras: “There’s no one you trust more than family, and any disagreements you have pass. You just understand each other. It’s amazing what we’ve been able to build together.”