From super fan to Super Bowl 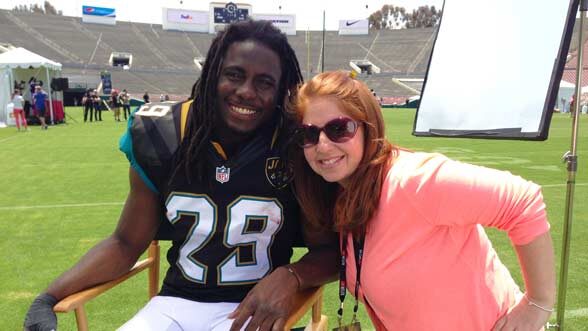 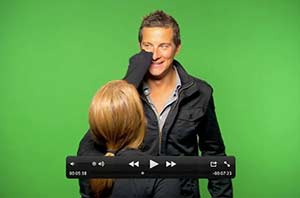 On set with Bear Grylls of “Man vs. Wild.” (Image courtesy of Haley Geffen.)

Time was ticking and Bear Grylls was sweating — a lot. Nothing new for TV’s most famous survivalist, but he wasn’t racing through a forest fire or staving off the desert heat on “Man vs. Wild.” He was in a 200-square-foot Manhattan hotel room preparing to film a television promo.

Director Haley Geffen, BA ’99, had to shift the energy in the room. Anything to stop the sweating. So she reminded Grylls of the time he did naked push-ups in a Patagonia ice field to stay warm. His mood lifted at the memory, and Geffen seized the opening: “Why do you always feel like showing your ‘little bear’ on national TV?” she teased. And with that, the talent began to warm up — and cool down. Grylls stopped sweating, and the shoot was a success.

Score another win for Geffen, an executive creative director in the New York production house Bodega Studios. She has worked her magic on a long list of high-profile (and high-maintenance) talent since launching her career on the sidelines of Michigan Stadium. 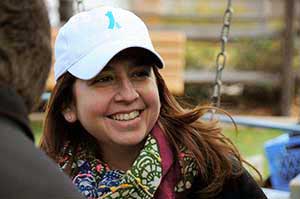 On the set. (Image courtesy of Haley Geffen.)

Geffen was starting her senior year as a sport management major and had no idea what she was going to do after graduation when ABC Sports came to Ann Arbor for the Michigan-Penn State football game. Their technical team was on strike, so Geffen, a self-described “psychotic fan,” and other students filled in.

Despite having suffered an ankle sprain playing intramural soccer, Geffen spent the entire game running up and down the Penn State sideline running cable for the handheld camera.

It was the best day of her life.

“I had all my classes with athletes,” Geffen says. “They were my friends.”

And while other volunteers were exhausted and couldn’t wait to get home, Geffen approached her supervisor and asked, “How can I do this again?” A week later she got a call asking if she would fly to Hawaii for the NFL Pro Bowl. She said yes to that and nearly every opportunity after, traveling to the Indy 500 and X Games that year.

She missed a lot of time in the classroom, but fulfilled all her course requirements and found a compelling career.

“My professors were so excited for me,” she says. “Their support is the reason I am where I am.”

“What makes her badass…” 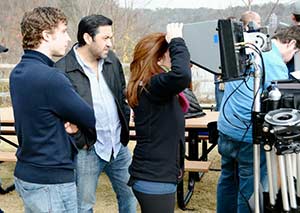 With the crew. (Image courtesy of Haley Geffen.)

Bodega Studios, a content creation company based in Manhattan and San Francisco, produces commercials, promos, and digital content for a variety of companies, including Microsoft and Nickelodeon. Geffen recently was promoted to executive creative director, where she writes, conceptualizes, directs, and produces video for clients that include Nike, NBC Sports, BBC America, and HP.

It’s a multifaceted skill set she began developing as a production assistant at ABC-owned ESPN, a job she landed soon after graduation.

“I could work at ESPN?” she thought at the time. “Me?!”  Because despite her passion for Michigan athletics, Geffen’s general sports knowledge was lacking at the time. Before the interview friends quizzed her on in-depth trivia until she was conversant in Vezina Trophy winners and the starting lineup for the Montreal Expos. The exercise paid off and thus began a nine-year run at ESPN. She worked on the network’s flagship program, “SportsCenter,” and traveled to the World Series and the Super Bowl while earning regular promotions.

In 2007 she left for Turner Sports in Atlanta while her husband attended business school. Geffen continued to work with athletes but she spent more time directing and producing other creative projects, including big-budget commercials and co-branded productions with Turner personalities such as Charles Barkley.

Within six years Geffen had won four Emmys and, after a brief stint at the Discovery Communications’ internal creative agency, she landed at Bodega. Within her first week she pitched NBC on the “Sunday Night Football” open, starting a longstanding creative partnership with NBC Sports Group.

“Sunday Night Football” is the highest-rated show on TV: Some 17-20 million people watch it every week. The open, which Geffen will oversee again this year, features Carrie Underwood singing a catchy tune — Geffen’s daughter is not even 2 and can recite it.

The shoot is “like working on a mini film,” Geffen says, with more than 100 people on the production team in Los Angeles. Geffen’s vision last year earned her a fifth Emmy and the chance to oversee the Super Bowl open this past February.

“She’s super bright and clearly driven,” says Bodega partner/executive creative director Adam Reid, who hired her. “What makes her badass is she cares. It’s a great environment for someone as talented as Haley, because she can oversee every step of the process and get it right.” 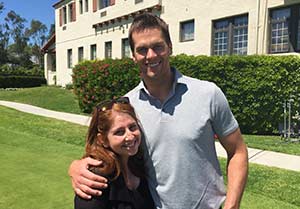 It doesn’t take long to discover that Geffen also still cares about Michigan. There’s a “HAIL” sticker on her office door. A panoramic photo from the first night game at Michigan Stadium hangs on the wall. Her personal photo collection—Geffen with Tom Brady in Los Angeles, Geffen with Denard Robinson at the rookie premier — would make any alum jealous.

LeBron James once jokingly told her to leave a Cleveland Cavaliers practice because she was wearing a “Big House” shirt. At the Pro Bowl in 1999, former Michigan Heisman winner Charles Woodson interrupted the player introduction rehearsal to sweep up Geffen with a hug, stunning the rest of the ABC crew.

But it’s not just the on-camera talent Geffen enjoys. She says she constantly hires people with different styles to keep her work behind the camera fresh. And she has a keen eye for what the masses will appreciate.

“What would everyone love about this?” she asks herself when tackling a project. “You have to separate what you love and what everyone else loves.”

Her colleagues can sometimes get into nuanced debates during the creative process, but Geffen strives to focus on the bigger picture: “When it comes down to it, it’s advertising: How do you reach people?” 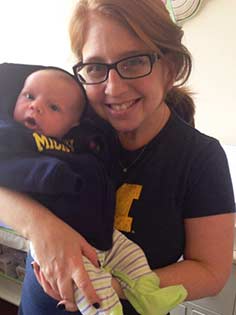 With her baby Wolverine. (Image courtesy of Haley Geffen.)

Speak to Geffen’s peers and you soon find that “reaching people” is one of her greatest skills. Jay Crawford, now host of ESPN’s “SportsCenter” flashes back to the morning after Tampa Bay won the 2004 Stanley Cup.

Geffen had learned the players were still celebrating inside the arena. “She was determined to get her way in and pull players out for live interviews,” Crawford says. “These guys were in various states of celebration. She convinced them it was OK to come on out and go on ESPN live. She got us great guests because of her hustle.”

In addition to her sports and entertainment work, Geffen also recently co-wrote, directed, and produced documentary shorts for Bloomberg BusinessWeek on the game-changers behind the most “disruptive” ideas of the past 85 years. She sat down with Donald Rumsfeld and Dick Cheney and made them laugh. She broke the ice with Starbucks CEO Howard Schultz by talking about Derek Jeter (she knew he was a fan) and congratulating him on his grandchild by saying “mazel tov” (he’s Jewish). Schultz was hugging her by the end of the day and asking to stay in touch.

“I don’t always have a filter,” Geffen admits. “It usually benefits me to be the way I am.”

Bodega’s Reid has seen that benefit in action.

“She’s funny,” he says. “She’s instantly disarming and likeable. She understands that storytelling is about character and she thinks people are interesting.”

It’s clear that people think the same about her.