The right side of history 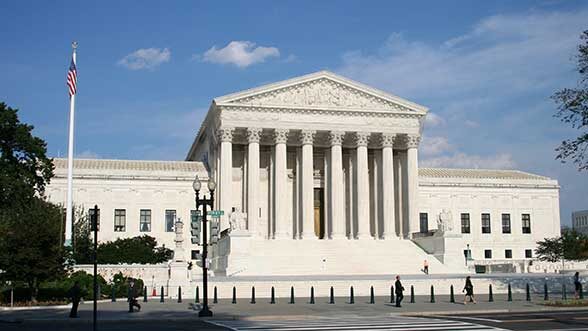 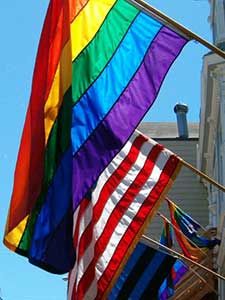 In June 2015 the U.S. Supreme Court ruled in favor of a constitutional right to same-sex marriage.

When the U.S. Supreme Court ruled in favor of a constitutional right to same-sex marriage in June, some celebrants proclaimed that the Court had finally placed itself on the “right side of history.” Of course, unsurprisingly, opponents of the decision declared just the opposite. Others have made similar arguments for or against civil rights legislation, climate change, evolution, Obamacare, etc.

It is a provocative concept, this idea that history itself takes sides in our political and cultural disputes, that there is a fundamental moral component to history, and that history flows in one particular direction, either toward changing our values or conserving them.

But those who invoke history on their side seldom speak from any historical expertise. By and large, they are laymen who hold a position and then cheer or grouse when that position is supported or defeated. So I wondered: What do historians think of the concept? Do theybelieve in a right side of history?

To answer that question I spoke with three University of Michigan scholars – Associate Professor Lawrence LaFountain-Stokes, the director of the University’s Latino/a Studies Program and an expert in both Latino/a and LGBT issues; Associate Professor of History John Carson, a co-director of the undergraduate studies program, director of graduate studies for the Science, Technology & Society Program, and a specialist in intellectual history and the history of science; and Martha Jones, Arthur F. Thurnau Professor of History and Afroamerican and African Studies, and associate chair of the University’s department of Afroamerican and African Studies.

For them, did this concept of “right side” have any historical validity?

Perhaps it shouldn’t come as too much of a shock that all three express reservations and that all three frame it as more of a political idea than a historical one.

“It depends on your view of what society, culture, mores should do,” says Carson, “and depending on what view you have of that will determine whether you think any given move is toward that or away from that.”

Moreover, as Carson puts it, “History always twists and turns.” He cites same-sex marriage as a perfect example. Thirty years ago, very few Americans favored a right to same-sex marriage. It certainly wasn’t, in historical terms, a widely accepted idea, and it wouldn’t have been considered by most to be on history’s “right side.”

Today same-sex marriage is constitutionally guaranteed. And though, according to Carson, “It is hard to imagine going backwards because of the ways in which institutions like this become embedded,” you would need what he calls a “transcendental moral sense of what’s right and what’s wrong” before you could say with absolute confidence that this is on the right side. It just seems to be on the right side now.

What Carson is arguing for, then, is a kind of historical humility that doesn’t allow us to arrogate history to our own positions. 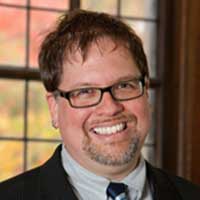 LaFountain-Stokes lodges another complaint against the existence of a “right” side – not that history is relative, but that historians themselves are selective in the stories they tell and the positions they privilege.  In this view, history is always incomplete; it always leaves out voices, usually those of the dispossessed and disempowered, so that history itself cannot be trusted.

“It’s not about identifying the right version and sticking to it,” he says. “Even when there is a dominant version of history being told, there are always going to be multiple competing versions.”

In the same vein, Carson adds that post-modernism, which is so much a part of linguistic analysis, has an historical application too. Once you recognize that there is no such thing as objectivity, that every historian has an agenda, whether he or she realizes it or not, you have not one side but many. Which one is the right side?

And then there is Jones’ critique, that history as practiced by professional historians is basically amoral, while the idea of a “right side” necessarily incorporates a moral posture. For her this isn’t a result of any moral lacunae; it is the result of professionalism.

“I don’t think of historians as engaged in arbitrating questions of morality,” she says. “We might write the history of ideas about morality, but the historian’s project is not to arbitrate, evaluate, or measure the past in those terms. We don’t look to offer views about how the past will look back at us.” Indeed, Jones believes the operative word for professional historians is not “morality” but “ethics.” You attempt to work in an objective way under a “set of shared ethical precepts that guide and premise our work.” 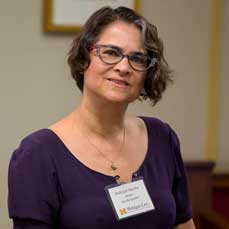 But whether it is possible to eliminate morality entirely from history is, all three scholars agree, a complex and vexing question. For example, just about everyone abhors slavery, and there would be a near-unanimous consensus today that the abolition of slavery in America was a good thing – by a moral reckoning, something on the right side of history. So how does a historian rinse that out of his or her historical analysis?

“I don’t think we ask the question, though we know it is there: Slavery, good or evil?” says Jones. “We are really trying to explain slavery as a political regime, a legal regime, a cultural regime, an economic regime, a human experience, and rarely is thorough excavation of the archives reducible to some moral equation, even as the evidence certainly leans, almost irrefutably, to the actual conclusion, which is slavery’s abolition.”

Even so, she says, the historian doesn’t need to reach for his or her own moral compass to condemn slavery because “I can look to the 18th century, the 19th century, and bring out the voices of the historical actors who embody that critique.”

Carson admits it isn’t so much that historians take morality out of history as that they eschew taking overtly moral positions. “I would say historians do morality more by the way they tell their stories than by using lots of heavily freighted moral language.”

Jones agrees that morality can figure into history, implicitly if not explicitly, sometimes just by the subjects the historian chooses to examine – in Jones’ case African-American women. 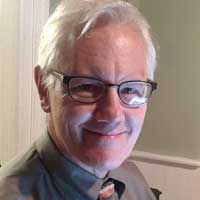 None of this is to say that historians don’t think morally. Of course they do. It is to say that they try to separate those personal moral predispositions from their historical work.

Jones talks about “historians as citizens,” writing op-ed pieces that “reflect a 21st-century normative judgment about the past,” but says those historians “are speaking in the voice of the citizen and no longer as the scientist.”

Carson agrees that historians, as human beings, do have moral feelings and may even believe that on certain issues – he cites global warming – believers are more likely to be proven right over the long historical haul than non-believers. He also thinks it is better to act as if global warming were real than to act as if it were unreal, if only because of the potential negative consequences of the latter. But he adds, again, there is no certainty to any of this, and historians don’t have the luxury of ordinary folks to act as if there were.

In addition, there is a practical question that militates against history as morality. Let’s say historians did invoke a “right side of history” – that is, they did say the Supreme Court decision on same-sex marriage, for example, was the right decision – one that future generations would look back upon as they look back upon Brown v. the Board of Education. What does society gain from that perspective? LaFountain-Stokes says that even if you are an advocate of the expansion of civil rights and of tolerance, taking a right side of history approach gets you absolutely nothing.

Carson also believes the “right side” begs the question: “What work does it take to make this vision a reality?”

Jones concurs, saying the “deep contribution of the work is asking a good question, bringing rigorous methods to bear . . . Is that something that gets us to a better world? Hard to say, but I can leave that to other people.” 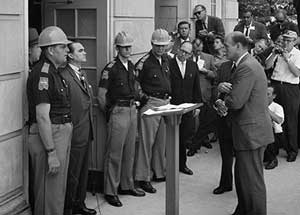 Alabama Gov. George Wallace standing against desegregation while being confronted by Deputy U.S. Attorney General Nicholas Katzenbach at the University of Alabama in 1963.

There is, however, a very different way of looking at the right side of history – not as a moral issue but as a temporal one. Seen in these terms, the right side is the one toward which history lists. In other words, history is basically a tide bearing us onward, and, more specifically, that tide is progressive. Thus the abolition of slavery, the fight for civil rights, and the acceptance of same-sex marriage doput us on the right side.

Jones calls this the “Whiggish” view of history, and she is highly skeptical of it.

Carson agrees that even when it comes to science, which seems verifiable, one should always hedge his or her bets about being headed in the right direction.

“There are very few scientific theories that are absolutely right,” he says. Newton’s theory is wrong in some respects. So is Copernicus’. Quantum physics completely changed our understanding of the universe. “Those are all reminders,” Carson says, “that what we think we know we may not know very much about.” 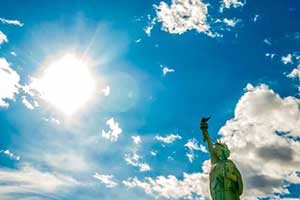 In Harvard psychologist Steven Pinker’s massive 2011 book, The Better Angels of Our Nature, the moral and the historical converge. Using reams of data, Pinker argues, counterintuitively, that there has been a more or less steady reduction of violence – his metric – throughout human history, so that there isa right side, and it tends toward less violence, more compassion, more tolerance, and more self-control.

Though Pinker professes objectivity, not liberal politics, all three scholars dismiss the book – Jones on the grounds of the scarcity of his data and his narrow definition of violence; Carson on fact that the argument is based on the accident of having managed to avoid a nuclear war, which would have obliterated it; and LaFountain-Stokes on the basis that minorities still suffer tremendous violence that statistics may not reveal.

And so, says Jones, if, as Martin Luther King Jr. proclaimed, the “arc of the moral universe is long, but it bends toward justice,” the sentiment may be powerful, but it is not exactly a historically valid one. For most historians, history has no vector – either toward justice or away from it.

Nevertheless, many of us non-historians, those of us not bound to historical ethics, may still feel that there is, even in this world of vast uncertainty and contention, both morally and temporally a right side – the side that does bend toward justice.

It just may be that the right side isn’t in history. It is in our hearts and in our bones. 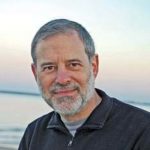 NEAL GABLER. AB '71/AM '75 is an award-winning author, cultural historian, and television commentator who has been called "one of America’s most important public intellectuals." His most recent book, Walt Disney: The Triumph of the American Imagination, is a New York Times best-seller, USA Today's "biography of the year," and a winner of the Los Angeles Times Book Prize. His other titles include An Empire of Their Own: How the Jews Invented Hollywood; Winchell: Gossip, Power, and the Culture of Celebrity; and Life the Movie: How Entertainment Conquered Reality. Gabler is a regular contributor to the New York Times, the Boston Globe, and The Los Angeles Times, and his essays and articles have appeared in Newsweek, Vanity Fair, The Nation, The New Republic, Men’s Journal, George, Playboy, Time, TV Guide, Variety, and many other publications. He is a senior fellow at the Norman Lear Center for the Study of Society and Entertainment at the University of Southern California and is a visiting professor in the MFA program at SUNY Stony Brook.
Social
Share on: Share on Twitter Share on Facebook