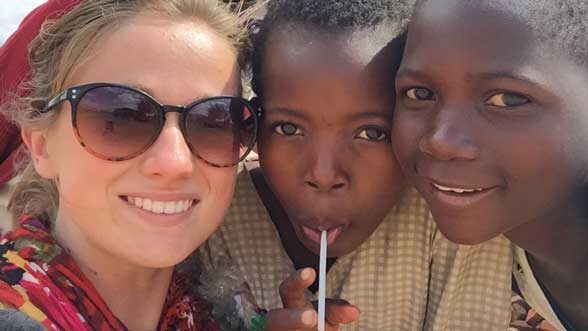 As the plane hummed on the runway at Detroit Metro Airport, 17 anxious teenagers fidgeted in their seats, peering through the drawn window shades.

It was the third time Leah Ouellet, BA ’13, had heard the same question. And though odd, it was understandable. A number of the Detroit-area students traveling with her had never flown before. And now they were embarking on a 29-hour journey to Africa, where they would spend two weeks building a village school alongside local residents in Malawi.

When the plane eventually did take off, some of Ouellet’s companions could see their own school on Detroit’s southwest side, a sight she describes as “a great metaphor” for the adventure they would share. 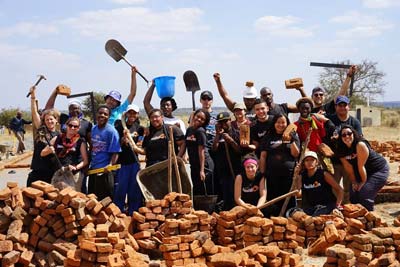 Since January 2014, Ouellet has worked as a program coordinator for buildOn at Detroit’s Western International High School where she manages after-school learning opportunities focused on community service.

The school that serves as her home base is adorned with the flags of 16 countries representing its diverse student body. It’s an ideal spot for the programs run by buildOn, an international nonprofit with the stated mission to break the cycles of poverty, illiteracy, and low expectations through service and education. Detroit is one of six U.S. cities in which buildOn runs programming.

The organization has constructed nearly 800 schools in a number of developing countries, and in July 2015 Ouellet and her diverse group of volunteers (students from her own school and others) set out to build one more. They were participants in buildOn’s Trek for Knowledge program, and Ouellet selected students who were service-oriented, open-minded, and hard-working. In the end, she really needed volunteers who could “accept being uncomfortable the majority of the time.”

Organizing such an elaborate trip with so many students presented a number of challenges, not the least of which was the 29-hour plane ride. Prior to embarking on the journey, the volunteers trained for six months. Ouellet helped some of the students’ parents navigate the logistics to clear them for travel with Trek, and she helped acquire luggage and sneakers as needed. Some families did not have a car; others rarely visited the doctor.

Despite the obstacles, many of the tight-knit families she came to know defied the common stereotypes of impoverished Detroiters. The parents “work hard to make sure their kids have these experiences even if there are other things they can’t provide for them,” Ouellet says. 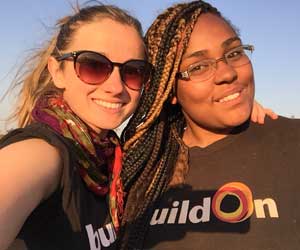 When the students finally arrived at their destination in Malawi, a chorus of local women and children welcomed them with song. The normally chatty high schoolers fell silent. They were, Ouellet says, “in a state of reverie, respecting the environment we had just walked into.”

That environment would soon present challenges. Che’Kenya Goodwin, age 16, faced conditions far different than those in urban Detroit. She slept on a thin floor mat in the home of her host family and used an outdoor latrine. And like many of her fellow students, she experienced stomach aches from the strange new foods.

But seeing young children carrying other kids on their backs made her feel guilty about complaining. “It gave me the strength to keep moving,” she says. And once she saw how much education means to people who don’t have it, “you don’t take your options for granted.”

By the third day of the build, the American teenager was walking through the work site singing Disney songs at the top of her lungs, a “joyful presence” on the team, says Ouellet.

“Observing the power of these communities in achieving an education and how much they sacrifice to educate their children” provided an amazing lesson for the American students, she says. 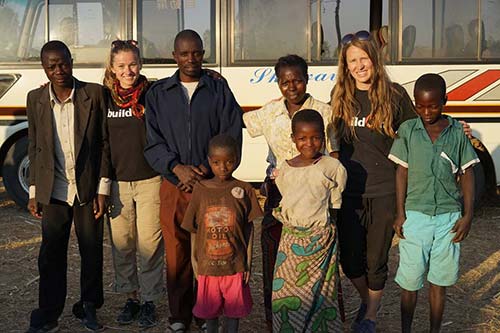 As the Trek concluded, Ouellet witnessed a number of tearful goodbyes. “The students were touched that their host families had grown to care so much,” she says. And she could see how moved the young volunteers were by the community’s transformation, one they’d helped to realize. Many of the students expressed a desire to drive a similar change in their own communities.

For her part, the graduate of the Gerald R. Ford School of Public Policy has long been fascinated with both Africa and Detroit; at age 19, Ouellet traveled to Tanzania and worked with incarcerated youths. And once she discovered a love for Detroit through a Ford School course taught by Ren Farley, U-M professor emeritus in service, she found that buildOn offered the perfect opportunity to foster community service both at home and overseas.

Eventually, Ouellet hopes to apply her passion for social justice toward reforming the prison system, embedding communities in the effort. She currently volunteers at a prison, facilitating a poetry workshop via the U-M Prison Creative Arts Project. Her memories of Trek for Knowledge will stay with her as she moves on to other pursuits. The experience has made her “more sensitive to views different from my own. It will always stay with me.” 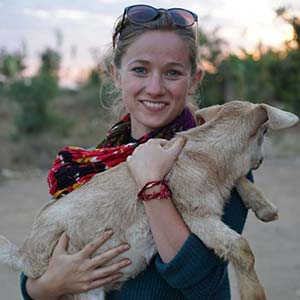 Since returning from Malawi, Ouellet has seen a marked difference in her students.

“To hear them telling other people about their trip, they’re really proud of that and have expanded their dreams for what they want their futures to look like,” she says. “Many hadn’t been downtown, let alone outside the state. Now they want to travel more, join the Peace Corps, and study abroad in college.”

As for the Disney-singing Goodwin? She views Ouellet as both a mentor and a sister. “Leah is the one I look to when I need guidance,” she says. “She always pushed me to become involved in my community and do better.”

Goodwin plans to study psychology in the future and aspires to a career as a pediatrician or nurse.

Ouellet, she says, “saved my life.”