You can ring my (Pretzel) Bell 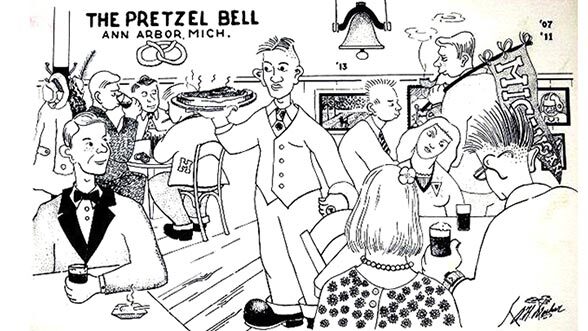 Do you remember the Bell?

A treasured hangout is coming back to downtown Ann Arbor after an absence of 30 years — the Pretzel Bell.

In early January a band of investors announced plans to open a new restaurant under the old name at the northwest corner of Main and Liberty, just a short block from the original, in the property long occupied by the Parthenon restaurant, more recently by a short-lived Latin-American place called Lena & Habana.

How much will it be like the old Bell? The proprietors — a group comprising Michigan alumni and restaurateurs — aren’t saying yet. In any case, they’ll be working with or against a powerful current of nostalgia.

Like any city, Ann Arbor has had its share of favorite haunts that rose and fell with the times —Hangsterfer’s, Joe Parker’s, the Orient, the Wolverine Den, Drake’s, the Village Bell, Bicycle Jim’s. But the joint with the longest legend was the Pretzel Bell.

The doors opened on the night of May 24, 1934, just five months after the end of Prohibition. The site was 120 East Liberty, in the block between Main and Fourth, in the space long occupied by an old grocery. It was a healthy walk from campus, but it couldn’t be much closer, since Ann Arbor remained “dry” east of Division Street. The proprietors, John and Ralph Neelands, said they opened the place “so the boys might have a place to sit down and have a glass of beer.” Boys and girls alike were happy to make the walk.

The best stories about the Pretzel Bell are stored in your memories. Tell us yours! We’ll follow up for details about the best ones we hear.
The brothers left the grocery’s tin ceiling in place and brought in fixtures from pre-Prohibition days. From Joe Parker’s Saloon on Main they got a lovely old bar. From the Oriental Bar came stout oak tables carved with the initials of generations of U-M students. (The decorating, intentionally or not, brought back the words of an old song often sung by students of the 1930s: “I want to go back to Michigan, to dear Ann Arbor town; back to Joe’s and the Orient, back to some of the money I spent…”).

From the ceiling the Neelands brothers hung an old bell that was said — not with rock-solid documentation — to have come from a farm southwest of town that dated at least to the Civil War. It was supposed to have come into the hands of the great Michigan football coach Fielding H. Yost, who rang it at Ferry Field before giving it to the owners of the new tavern. The name of the place was said to derive from two signals of hospitality in the beer gardens of German university towns — a basket of pretzels and a bell to call in neighbors to hear important news of the day. 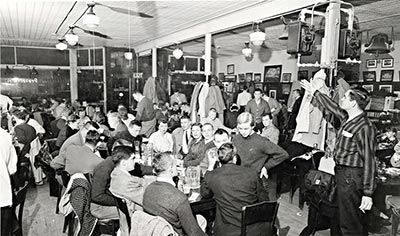 A wild night at the Bell. (Image: Wystan Stevens, Flickr.)

The Neelands brothers got the jump on post-Prohibition competitors, and the Pretzel Bell became thewatering hole for thirsty U-M students. In no time it became known simply as “the P-Bell” or “the Bell.” It became the favorite of athletes, musicians, and the staff of The Michigan Daily,who helped to pass the word in print.

In fact, Tom Kleene, The Daily’seditor in 1936, refreshed himself so often at the Bell that he started to get his mail there — a fact that John Neelands made plain one night by delivering a stack of letters to Kleene’s table just as he was sitting down for dinner with his mother.

On weekend nights the hubbub was uproarious. The bell was rung to announce: “There’s a telephone call for….” One night legendary conductor Leopold Stokowski, fresh from the May Festival at Hill Auditorium, took a seat among cheering students and demanded to hear some college songs. He wound up standing on his chair and conducting the crowd in “Varsity” and “The Victors.” Coach Yost, dropping in for lunch, would call for 11 salt shakers and 11 pepper shakers to diagram Wolverine plays. 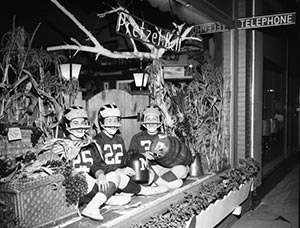 For a Halloween lark in 1960, Mary Lou Elliott, Shirley Staib, and Elvie Sizer dressed up like football players and posed in the Bell’s window. (Image: “Old News,” Ann Arbor News.)

In 1944, new owners, Clint and Helen Castor, took over. In their time a second and larger bell was hung from the ceiling, this one a gift from the men of Alpha Delta Phi. A ritual began that would continue for decades. It was known as the “Bell Party,” which reached its high point when a student, on the day of his or her majority, climbed onto a table and downed a prescribed quantity of lager while the bell rang overhead. By the mid-1970s, the Castor family would estimate the total number of Bell Parties at 30,000.

One day in the late ’50s, a patron dropped in with a Tiffany-style hanging glass lamp shade. The Castors liked it so much they acquired dozens more to hang from the ceiling, giving the place the distinctive look of its modern era.

On it went into the 1960s, with beats and hippies jostling for tables among aging alums and townie business types. But in 1969, a fire started in the furniture store next door. When the flames were extinguished, the Bell’s ceiling had collapsed, destroying lamps and priceless memorabilia.

But the Castors’ heir, Clint Jr., remodeled and even expanded to the adjacent storefronts. When the Bell’s doors reopened, loyalists returned in droves. With bluegrass suddenly hip in the 1970s, the place gained a certain new-old chic by giving a regular gig to the RFD Boys, a local group that gained national renown.

In 1971, a creative type in the Law School recorded his gratitude for the Bell in a poem titled simply: “Pretzel Bell.” It read in part:

One dark night with red eyes blinking,
And my head in need of shrinking,
With my life entombed in thinking,
My emotions all a’swell,
On the brink of sheer disaster,
Came a vision of Clint Castor
And the joy and the laughter
Of his Bell.
Yes his Bell, Bell, Bell—
Pretzel Bell.

An extra helping of nostalgia 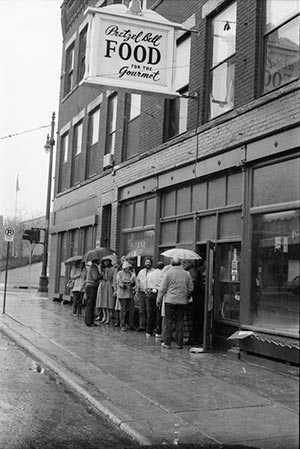 Despite the morning drizzle, fans lined up for an auction of Bell memorabilia when the doors closed for good in April 1985. (Image: “Old News,” Ann Arbor News.)

But by the late 1970s, Castor filswas laboring against heavy competition in the blocks close to campus, and he was apparently not the business manager his parents had been. Health violations closed the place for a time. Then the IRS came calling, asking Castor for more than $100,000 in employees’ withholding taxes. On a rainy day in April 1985, the taxmen auctioned off the furnishings for a total of $208,000.

“Students nowadays look on it as quaint but dull,” said the presiding IRS agent. “It simply got passed by time.”

Maybe so. And yet, in the 30 years since, nostalgia for the Pretzel Bell has enjoyed a peculiar longevity even as other memories faded. Jim Carty, a sports columnist for The Ann Arbor News,said as much in 2009.

“Never has such a long-shuttered restaurant evoked such long-time mourning,” Carty wrote. “To me, who moved to A2 in 2001, mourning the Pretzel Bell is part of what makes Ann Arbor, well, Ann Arbor. If you’re of a certain age, you seem to mourn the Pretzel Bell. I like that.”