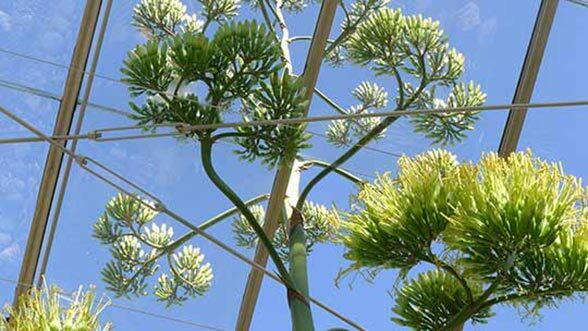 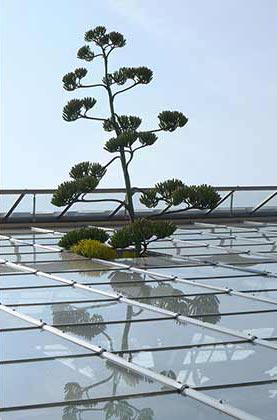 The staff at Matthaei removed a pane from the conservatory roof to accommodate the agave growth spurt. (Image courtesy of Matthaei Botanical Gardens and Nichols Arboretum.)

A Hollywood screenwriter couldn’t pitch a more compelling drama than this true-life tale.

The setting is the Matthaei Botanical Gardens conservatory. The star is a variegated American agave plant. The story begins in spring 2014 when the plant suddenly produces a stalk that eventually would grow six inches a day until it bloomed and set seed for the first and only time. Then, its reproductive mission accomplished, the magnificent plant dies.

So what’s so spectacular about that? In the wild, this end-game scenario usually occurs between ages 10 and 25, but the Matthaei agave was at least 80 – a U-M graduate student brought it to Ann Arbor in a pot from its native Mexico in 1934. Much like Jack’s magical beanstalk, the plant eventually ascended to 28 feet in just a few short months, requiring the Matthaei staff to remove a pane of glass from the conservatory’s ceiling. Widespread media coverage exploded.

“People related to the almost-human aspect of the story,” says Joe Mooney, marketing and development associate for Matthaei and Nichols Arboretum. “The agave was living but waited 80 years to bloom. It’s almost ineffable. Some events and happenings here get a lot of attention, but the agave certainly ran away with the coverage prize. At first, I dutifully kept track of all the placements, but then I lost count. I’ve been here about seven years and there’s been nothing as extensive in my tenure.”

And that’s just Act I.

In fact, Mooney’s use of the past tense regarding the agave might be inappropriate here. For example, one of the plant’s seedlings featured prominently in a wedding ceremony at the conservatory last April when the bride and groom exchanged an early sprout, along with their vows.

Part of the agave’s stalk was fashioned into a Japanese shakuhachi flute that debuted at a concert at Matthaei in February, before a capacity crowd of 120. Another piece is in the hands of Ryan Gates, a Detroit musician and instrument maker who plans to make a didgeridoo out of it. Images of its pollen have helped calibrate equipment at U-M’s Medical Imaging Laboratory, as well as inspiring a set of ceramic sculptures that will be on exhibit at the conservatory this spring.

Its passing notwithstanding, whatever it was that brought so many people under the plant’s spell shows no signs of letting go. The agave effect might last longer than its life did. 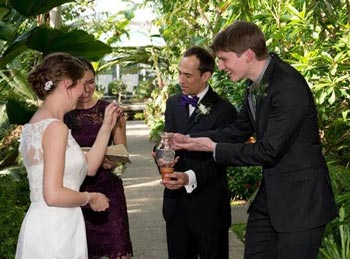 Emily Kueh and Michael Chodos exchanged an agave seedling at their wedding. (Image courtesy of Kueh and Chodos).

Emily Kueh and Michael Chodos may have had something like that in mind when they pursued one of its seedlings for their wedding.

“We sort of had this tendency in our lives of picking up plants from important or random moments,” says Kueh, “so it seemed appropriate to find out if we could get a seedling. One article mentioned they were thinking about selling them to the public. We got lucky because they gave us one early. I think it was because of how excited we were about it.

“The best part was when Linda (Neely, events planner at Matthaei) showed them to us and they were smaller than your pinkie in this little, little pot,” she adds. “We thought, ‘This is perfect: a new beginning type of thing, starting from scratch.’ Even the ceremony referred to it as the ‘love agave.’”

That “love agave” currently resides on a windowsill in the couple’s Boston apartment.

Songs in the key of life

The seedling’s siblings have had to wait longer to find their forever homes. Because Matthaei wouldn’t offer them until they had grown enough to be viable, the first batch of 25 didn’t go on sale until the day of the February concert, featuring the agave flute. Fans snapped up the entire stock of seedlings by the end of the evening, and it’s uncertain when – but not if – more will be available.

That evening’s music, wafting into the exotic foliage and accompanied by the softly humming life-support machinery, was made by two performers, both named Michael Gould, which itself is almost stranger than the agave’s story.

One of the Michael Goulds, who received the honorary middle name Chikuzen when he became a master of the shakuhachi flute, played the instrument crafted from the agave by a master flute maker in San Francisco. His colleague, the other Michael Gould, is a percussionist and U-M music professor. He used a section of the agave as a drumstick in one piece. Most musical instruments ultimately come from nature, of course, but that connection felt closer, more intense, with these instruments in that setting.

The percussionist Gould is a faculty associate for the Botanical Gardens and the Arboretum. About a year ago, Bob Grese, their director, and Mike Palmer, their horticultural manager, asked him to see what he could do with a piece of the agave stalk.

“I’ve done a lot of different things at the Arb, so they knew I was crazy and open to anything,” Gould says. He not only conceived of making it into a flute but also pulled it off, producing one that was, in fact, playable, to provide what he calls “proof of concept.”

When the percussionist Gould joined the faculty of what was then the School of Music in 1998, he kept getting mail and phone calls about shakuhachi lectures and concerts. No sooner did he realize that there must be another Michael Gould at the school than the two met by chance, becoming friends and musical collaborators. It’s harder now, with the flutist Gould based in Wyoming, but how often does a chance like this come along?

You oughta be in pictures 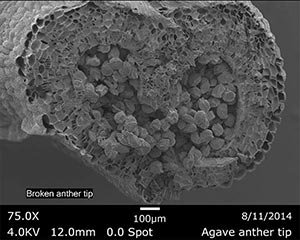 Even this microscopic image of the agave pollen appears heart-shaped. (Image courtesy of the Microscopy & Image Analysis Library).

Chris Edwards probably felt the same way when he got in touch with Mike Palmer about the agave. The laboratory manager at the U-M Health System’s Microscopy and Image Analysis unit, Edwards wanted to see if any of the instrumentation housed there could help preserve parts of its legacy. He also knew that the structures of pollen from certain plants can be used to help calibrate measurements for imaging devices, especially scanning electron microscopes.

The specimens collected for imaging by Edwards and his colleague, Shelley Almburg, proved both spectacular and utilitarian. Sadly, Almburg passed away suddenly and unexpectedly a few months later, but part of her own legacy is now directly linked to the agave’s — not only via images for posterity but in devices better equipped for their lifesaving work.

It wasn’t long before those images inspired yet another artist to incorporate the agave in her work. At a meeting with Matthaei staffers about her part in a planned exhibit, Susan Crowell asked if she could see the agave pollen “and they said, ‘Oh, we can get you some images,’” recalls the ceramist and U-M professor of art. “Once I had a look at the pollen, I decided it would be really fun to make. The big thing in ceramics is texture and there are several layers of texture in this pollen, so it can land and catch and take hold. If you have a visual life, you can’t help but be intrigued by what this stuff looks like.”

Not only that, but Crowell is also a beekeeper “and pollen is food for the bees. I don’t think I have a scientific kind of mind, but I think there are things about art and science that are commonalities.”

The three sculptures she made will be part of the “pollen art” exhibit at Matthaei from April 2-May 8. “It’s not a conventional commission,” she says. “Someone asked me, ‘Is this a replica of the pollen?’ I said,  ‘No, it’s more like a portrait.’” 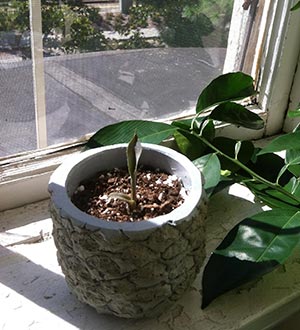 The words “portrait” and “pollen” are rarely found so close to each other, but their proximity is further evidence of the temptation to personify the agave.

“I thought it was telling that people would use terms like the plant ‘waited’ 80 years to flower, as if there was some sort of willful act on its part,” says U-M art history professor David Doris. “More than that, there was something in the way it lived its life that fostered a certain degree of hope: Here was a geriatric plant that proceeded to perpetuate itself, even in its moment of death.”

If this sounds like some kind of superhero, you may be getting close.

“Humans are pretty quick to see themselves in virtually everything they come across,” says Doris, “and here is a living, breathing, drinking thing that’s going to give birth and move on. The metaphors of death, but also of hope and regeneration, are hard to pass up.”