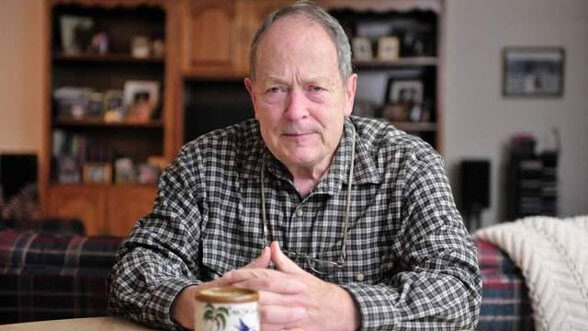 Truth is not only stranger than fiction. It can be more compelling, macabre, and infuriating, as well.

Take the record-high ratings, social media fervor, and critical commentary generated by such “true-crime” series as “Making a Murderer” (Netflix), “Serial,” (NPR), and “The Jinx” (HBO). It’s no surprise that networks are rushing to cash in on the audience’s desire to play armchair detective, judge, and jury.

Was this person framed? Did the police bungle the investigation? Did this guy actually get away with murder?

But here’s where the infuriating part comes in: Rarely are the strands of the intricate plot pulled together and matters resolved. The “truth” in true crime can be elusive. And when the final credits roll, a frustrated audience hooked on predictable procedurals is left with more questions than answers.

Imagine how the victims feel. 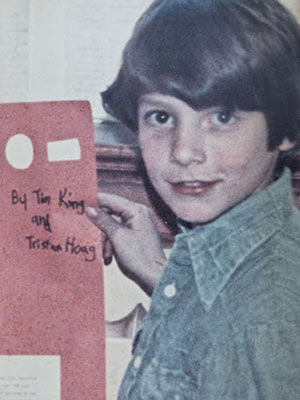 Attorney Barry King, JD, ’58, author of the blog “A Father’s Story – OCCK,” has lived in that infuriating space since March 16, 1977. That’s when his 11-year-old son, Tim, was abducted behind a Birmingham, Mich., pharmacy. Tim’s body was found six days later in a roadside ditch. He had been sexually assaulted and smothered.

King’s son was the fourth and final victim of a killer (or killers) dubbed the Oakland County Child Killer (OCCK). Prior to Tim King’s disappearance, another boy and two girls disappeared from Ferndale, Royal Oak, and Berkley. Their bodies were found in Southfield, Troy, Franklin Village, and Livonia (in Wayne County).

The heinous crimes triggered one of the most sprawling and complex investigations on record, with the Michigan State Police (MSP) and the FBI as key players. An estimated 20,000 tips came in. Investigators reviewed hundreds of pieces of evidence and conducted thousands of interviews.

Despite its magnitude – or perhaps because of it – the original 200-member task force never solved the OCCK case. In December 1978 the task force shut down after exhausting its $2 million budget.

Subsequent task forces have formed over the years as new technologies come on line and “new” evidence emerges. For example, in 2012 investigators discovered the MSP was holding hairs found on the bodies of Tim King and the OCCK’s first victim, Mark Stebbins. Southfield was holding hairs found in a car belonging to a convicted pedophile. Some 35 years after the fact, mitochondrial DNA tests proved the hairs belonged to the same person. It was not the convicted pedophile. And the actual person has yet to be identified.

Instead of achieving closure, the victims’ families were left to wonder: How many other times over the years did investigators fail to share critical findings across multiple agencies? How many leads were left on the table?

A matter of trust

One reason true-crime is so captivating is that it sheds light on the inner workings of law enforcement and the courts. That theme is at the core of  King’s blog, “A Father’s Story — OCCK.”

He says that trust began to erode in 2007 when his daughter, Catherine Broad, received an unsolicited tip about her brother’s murder. She shared the information with the Livonia Police Department, which led investigators to identify a possible OCCK suspect named Christopher Busch. He had been a resident of Bloomfield Township at the time of the murders and was the son of a prominent executive at General Motors. Busch had died in November 1978 (just a month before the task force shut down). His death by shotgun was ruled a suicide

In his blog, King writes, “In [October] 2008, both Wayne County and Oakland County identified Christopher Busch as the best suspect the system had produced in over 30 years.”

But in March 2010, King says he was surprised to learn from the Birmingham chief of police that investigators were no longer following the Busch lead. He says he never received a satisfactory explanation from either law enforcement or Oakland County Prosecutor Jessica Cooper.

“What happened between October 2008 and March 2010 has never been answered for me,” King says. “That’s when I started my search for the truth.” 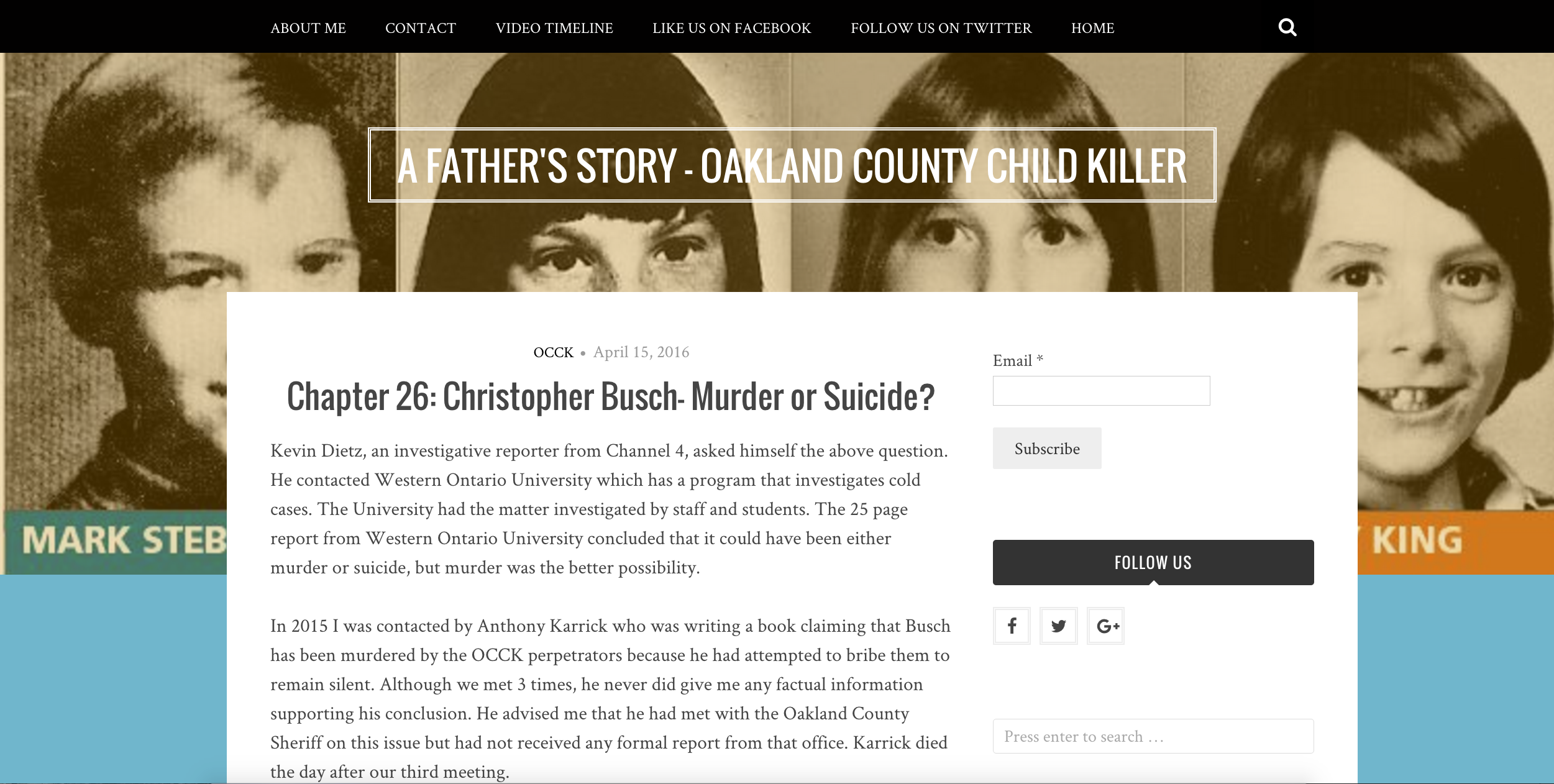 Be careful what you wish for

King submitted a Freedom of Information Act (FOIA) request to the MSP in April 2010 seeking its entire file on Christopher Busch. In December that year he received more than 3,400 pages documenting the investigation.

Among the most disturbing revelations: Busch had been convicted multiple times of criminal sexual conduct with a minor, but never served time. In January 1977 police questioned Busch as part of the OCCK investigation and allegedly cleared him following a polygraph test. Tim King was abducted, sexually assaulted, and murdered just a few weeks later.

Instead of clarity, King came away with more questions after reading the file. Why did Busch walk? Where was the suicide report? Could Busch and his alleged associates have been part of a pedophile ring?

King attempted to meet with Cooper, but grew increasingly frustrated when he could not connect with the prosecutor directly. He continued to file FOIA requests seeking additional records to which he felt entitled as a victim.

Once, he says, he received documents from a reporter after authorities told him those same documents had been destroyed. Another time he was denied information the prosecutor said would compromise the case if made public. About a year later, King received that same information when the prosecutor’s office hosted a press conference to reveal it.

Just give me some truth 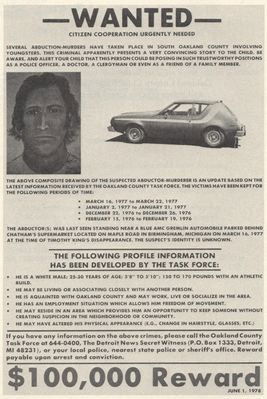 Now, after six years of legal wrangling — FOIA fees, legal fees, appeals, and dismissals — King is changing his focus from the past to the present.

He is using “A Father’s Story — OCCK” to report his frustration with modern-day law enforcement and the judicial system.

“If I were not a lawyer, I would not have gotten as involved as I did,” King says. “I believe the Oakland County Prosecutor has violated four or five basic theories of law and has not been required to explain that to the court or to me. So I decided to take what I’ve discovered to social media so the public can be advised of what I think. Somebody, I believe, owes my family and the other families an explanation of my concerns.”

Cooper, who was elected in 2008, says members of her staff have responded to all of King’s queries over the years. Her chief assistant, Paul Walton, spoke at length with King in 2012. King also met with Gary Miller, then-Oakland County deputy sheriff, she says.

“I know about the craziness that went on 40 years ago, and whether we’re ever going to piece that together – I don’t know,” Cooper says. “We have answered the same questions over and over again. We’ve gone into all sorts of FOIA requests.”

As for Busch, specifically, evidence cited by King that would point to his possible involvement in Tim King’s murder is either “too general” or excludes Busch altogether, she says.

A matter of trust

“I have lived the fear of the OCCK my entire life. My child is never out of my sight. Forty years later, nothing has changed for me.” — A commenter on King’s blog.
Sadly, as true-crime documentaries go, the 40-year OCCK saga hits all of the grim story beats: A child killer terrorizes a community for more than a year. A massive task force fails to solve the murders. Critical errors are made. Victims lose faith with a system they deem dysfunctional. Suspicion supersedes trust.

At the center of the heart-wrenching mystery is one victim who has chosen to take on the role of detective, lawyer, and true-crime documentarian.

King launched “A Father’s Story — OCCK” in February to mark the 40th anniversary of the OCCK’s first victim, 12-year-old Stebbins. He supplements many entries with affidavits, police reports, court orders, and other records obtained through his FOIA filings. A video timeline showcases TV news coverage of the case from December 2010 through February 2016.

It’s not the first time someone has attempted to document the confounding twists and turns of the tragic case. There are a handful of fiction and nonfiction books out there and a short documentary on YouTube. The King family produced its own DVD, “Decades of Deceit,” with proceeds going to the Tim King Fund. Websites are devoted to the case. Reddit users trade links and tips. King’s daughter authored a blog from January 2013-November 2015, titled “What the Hell is the Deal with the Oakland County Child Killer Investigation?”

But this is the first time King, himself, has engaged directly with the public.

“I am not trying to create sympathy for myself,” he says. “But I do read the comments and I take solace in them. I am hoping someone will come forward with missing information.”

For now King is encouraged by the fact that an active MSP task force, which includes a representative from Cooper’s office, appears to be demonstrating more inter-agency cooperation than ever before. The MSP also is digitizing documents related to the case, says an MSP spokesperson. “It’s a big job; we’d love to [digitize] all the files. We’re in the process of prioritizing.”

But as King, 85, puts it, “I don’t have many years left to have the system resolve this for me, and I’ve been very unsuccessful in that so far.”

“Tim deserved better than he got, and so did those other three kids,” he says. “I was asked recently how I can handle all this. I think it’s because I worry more about tomorrow than yesterday.”