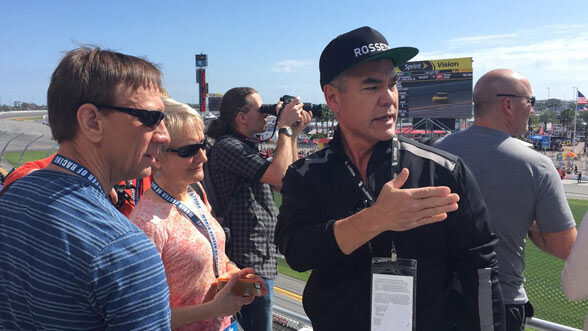 Stock cars roar by on practice laps as Jim Renne BS ’83/ MArch ’86, shows off his “new baby,” the recently re-designed American icon, Daytona International Speedway. It was a risky delivery.

As principal architect for sports facilities at the Detroit architecture firm Rossetti, Renne has been in on the ground floor in the design of sports stadia and arenas around the world, from the Incheon United Football Stadium in South Korea to Detroit’s Ford Field — as well as the upgrade of U-M’s Yost Ice Arena. But none has been more challenging than the $400 million project called “Daytona Rising.” 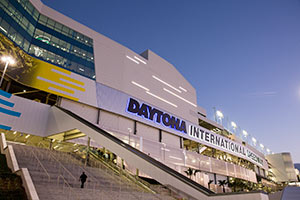 The sheer size of the place makes this project stand out.

“At 101,000 seats, it’s the largest facility we’ve designed,” says Renne. The grandstand is nearly a mile long, so imagine laying the Big House, cut in half, end to end — that’s how big it is. The track itself is essentially a 2.5-mile “playing surface,” which poses a special challenge when it comes to creating great site lines for fans.

“We had a very tight budget and schedule,” Renne says. “The owner had huge expectations of the design andthey were hosting two races while still under construction.”

The goal: Change Daytona from a bleachers-and-Budweiser race track into the world’s first motor sports stadiumwith all the amenities. Make it safer for fans watching cars traveling over 150 miles per hour. Improve the experience to attract a younger, bigger, more diverse fan base. And make it elegant enough to appeal to potential high-end sponsors like Rolex.

Most of all, meet the expectations of the NASCAR fans, who, says Renne, don’t hesitate to make their opinions public. They’re the most loyal fans in all of sports and Daytona is NASCAR’s birthplace. Mess with it at your own peril. 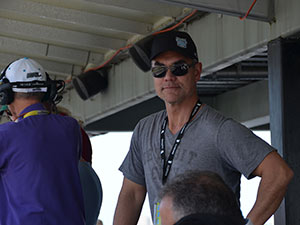 It seems like a tall order for someone who’s “not a NASCAR guy.” Renne grew up in the Philippines, Japan, and California before his family moved to Grand Rapids during his senior year in high school. The architect divides his work time between Rossetti’s Detroit and Beijing offices, and he’s more likely to spend vacation time backpacking and SCUBA diving than hanging out at tracks like Talladega or Michigan International Speedway.

Yet, it doesn’t take a NASCAR pedigree to design a racing stadium because, for Renne, architecture is all about telling a story. He cultivated that philosophy at U-M where he focused on design theory.

“The function of a building is important,” he says, “but the soul of it, the meaning and poetry of it, is more fascinating. Otherwise, a stadium is a stadium. That’s why many venues have no sense of environment.”

For Renne, these large public spaces offer a great opportunity for storytelling on a grand scale.

Redesigning the capital of NASCAR Nation 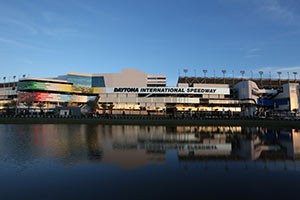 The project to upgrade Yost Ice Arena helped pave the way to Daytona. Yost was built in 1923 and originally intended as a field house. It needed to be brought into the 21st century while still honoring its history and tradition. Among other things the project added a concourse and elevated seating.

“We updated it to make it contemporary and relevant,” says Renne, “but retained what makes it a unique structure: its windows, trusses, the historic feel of its bones.”

Similarly, at Daytona the architectural team had to reconcile history with the future. Renne began by immersing himself in NASCAR.

“I went to a lot of races and tracks to get a feel for what’s unique about the sport, including the culture, demographics, and the social experience,” he says.

He absorbed the history of this quintessentially American sport and of the Daytona 500, with roots in the sand of nearby Daytona Beach. Built in 1959, the speedway calls itself the World Center of Racing.

“The Daytona 500 is the Superbowl of NASCAR,” says Renne. “The experience is about much more than just watching a race. We’re creating a story about motorsports.”

Tour the new Daytona International Speedway with Renne and you’ll look at every other stadium you enter with new eyes. From a distance, the sun glints off the grandstand’s shiny stainless steel skin and it becomes apparent that NASCAR and elegant design can, indeed, go together. Like a sculpture, the building curves and shines as if the structure itself were in motion.

Fans enter the stadium through five giant entry gates, dubbed “injectors,” each colorfully branded by sponsors such as Chevrolet, Toyota, Sunoco, and Florida Hospital. The main concourse offers the first view of the track, which creates “a common platform that connects you to why you’re there and relates you to where you are in the space,” Renne says.

“You have to feel like you’ve landed somewhere,” he says. “The building is about a mile long, so we wanted to modulate the experience and punctuate it with big moments.” 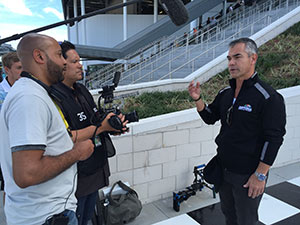 The architects divided the massive space into 11 themed “neighborhoods,” each the length of a football field. Fans can mingle under race cars suspended from the ceiling, buy refreshments, and make “pit stops.” These thematic hubs provide the subtext of the larger story, Renne says. Fans can create racing videos of themselves, and find other activities designed to entertain during a race that often lasts more than three hours.

The imposing grandstands have been elevated (to 150 feet), moved back, and capped with suites, all offering a view of the entire track. Sleek and beautiful as it is, fans can still party in the infield, bring in their own coolers, and hang out on the track before the race.

When famed driver A.J. Foyt first saw the stadium at the Daytona 500 in February, he called it “the prettiest speedway in the world.”

Renne felt like taking a victory lap. “It was seeing all the blood, sweat, and tears my team and I put into this project finally put sharply into perspective and with a sense of purpose — few more amazing feelings than that come from one’s career.”

TERRI PETERSON SMITH is a journalist, editor, and expert on literary travel. Her work has been featured in USA Today, Acura Style, Better Homes and Gardens, Continental, National Geographic Green Guide, and many others. Her new book, Off the Beaten Page: The Best Trips for Lit Lovers, Book Clubs, and Girls on Getaways, was inspired by her voracious reading habit, love of travel, and literary field trips with her own book clubs. She received a BA in history and journalism from U-M and an MA in journalism from Indiana University. Born and raised in Michigan, Terri currently lives near Minneapolis with her trophy husband and a big dog.
Social
Share on: Share on Twitter Share on Facebook