Putting his life on the line 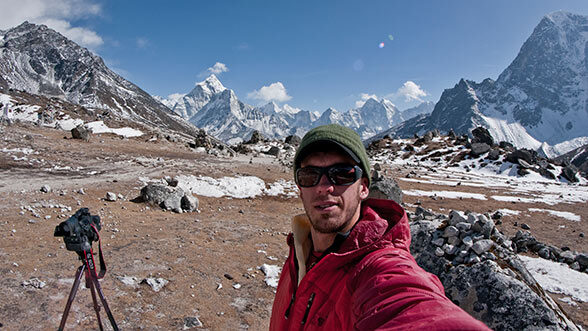 Filmmaker Jim Aikman, BA ’08, was on assignment in the Ruth Gorge of Alaska, just below Denali, in 2009 when disaster struck. It was a climber’s worst nightmare.

“We’d been out shooting all day and were skiing back to base camp around 2:30 a.m. in broad daylight because it was right on the summer solstice,” he says. “I was lost in the moment, exhausted and just in the zone, when the ground suddenly gave out from under me. I had fallen into a crevasse. When I looked down, all I saw were my skis loosely flailing below me above a black, bottomless void.”

Two weeks earlier, Aikman’s climbing partner and close friend, Wade Johnson, had died in an avalanche while scaling a peak in Mainland China. Now Aikman feared he too would be “lost to the mountains.”

But with help from his boss, who was tethered to him by a climbing rope 20 feet away, Aikman was able to climb out of the crevasse and continue the descent. 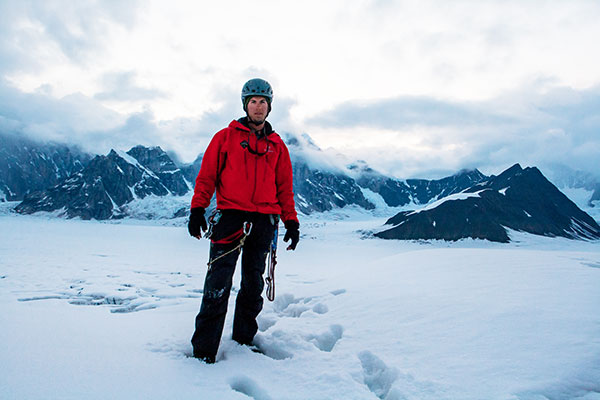 On location in Alaska. (Image courtesy of Aikman.)

It wasn’t the first time the University of Michigan alum had put his own life on the line to pursue his passion for adventure filmmaking. “There have been many moments like that one in Ruth Gorge over the years ─ close calls that reminded me how fragile life is on this planet and how easily it is extinguished,” says Aikman, who recently launched his own production company, Bedrock Film Works, in Portland, Ore.

“Filmmaking has made me the person I am, without a doubt,” Aikman says. “I wouldn’t have it any other way. I feel so fueled by this industry and community of creatives and revolutionaries who understand the power of film to change an audience and the world.”

Over the past decade, Aikman has earned prestigious awards for his work as a producer and director at the Boulder International Film Festival, the Trento Mountain Film Festival, and the Bilbao International Film Festival, where he took the grand prize for Jeff Lowe’s Metanoia, which he directed. The film chronicles the story of legendary athlete and climber Lowe, his devastating fall from grace, and perhaps the boldest solo mountain climb in history: Metanoia, on the North Face of the Eiger. It’s an emotional story — Lowe currently is battling ALS, a condition that brought his climbing career to a close.

A storyteller at heart, Aikman uses the creative, yet complex, medium of film to express his own artistic vision and ideas, as well as to shine a light on the beauty of the natural world and the common threads that bind people together.

“I try to bring a sense of humanity to my work,” he says. “While people may express their beliefs and ideals differently, we are all the same in fundamental ways.”

Where the wild things are

Aikman caught the film bug early in life, at 15, while growing up in East Lansing, Mich.

“I’ve always been a huge cinephile,” he says. “When I started taking high school video classes and working for local public access, I knew I was hooked.”

At the University of Michigan, Aikman pursued degrees in film and English literature under the watchful tutelage of film professor Terri Sarris and English professor Ralph Williams.

“I’ve had some pretty hilarious experiences abroad trying to convince non-English-speaking bar owners to find an obscure sporting event on television from somewhere called Michigan.”
“I think I have a good eye for aesthetics and a strong sense of narrative construction, thanks to my liberal-arts degrees,” he says, “which taught me how to do close readings and think critically.”

“I had always thought I wanted to go into narrative fiction films in Hollywood, but when college ended, I was more inspired by climbing films like King Linesand programs like Planet Earth,”Aikman says. “I decided I wanted to be one of the men and women who went out and brought this incredible imagery home from wild places, so others could see and appreciate it.”

A few weeks after his 2008 graduation, Aikman packed up his Subaru and headed west from Michigan to Boulder, Colo., where he landed a job with Sender Films, the leading producer of climbing media in the world. There, he “learned the ropes” and helped to film, edit, and produce the six-part series First Ascentfor Nat Geo. Two years later, Aikman struck out on his own as an indie filmmaker.

Aikman has created documentaries and promotional content for prominent companies in the outdoor adventure industry and traveled to exotic locales throughout the world. Each of his film assignments has left an indelible imprint and imparted a lesson about the planet and its inhabitants. Highlights include:

A Puja blessing by Buddhist monks in the Himalayas 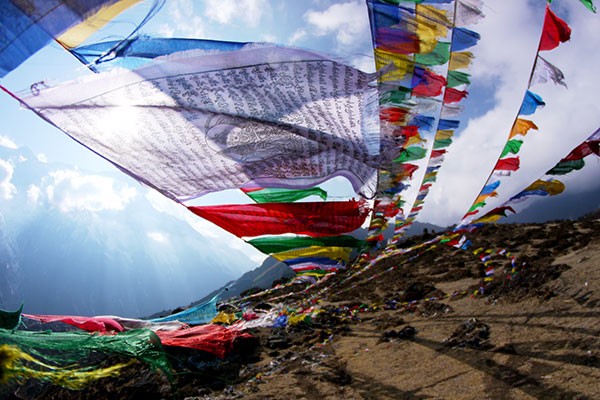 Aikman was shooting an advertising campaign for Mountain Hardware on Cholatse Mountain in the Khumbu region of the Nepalese Himalayas in spring 2011. He had nurtured an early interest in Buddhism and studied the religion at Michigan, so he went to a monastery to receive a Puja blessing by the monks.

“When you are climbing a mountain in the Himalayas, it is common to seek out a monastery to have a Puja ceremony and receive a blessing to protect you on the mountain,” he says. “I took a scary 20-foot fall while I was alone on a peak filming long shots of other climbers. I lost my lighter when I fell, so I could not make water from snow or prepare any food during the night. But I survived until the other climbers came down and we were able to descend. I felt blessed to have received this gift of protection from the monks, and it worked.”

A Despacho ceremony in the Cusco region of Peru 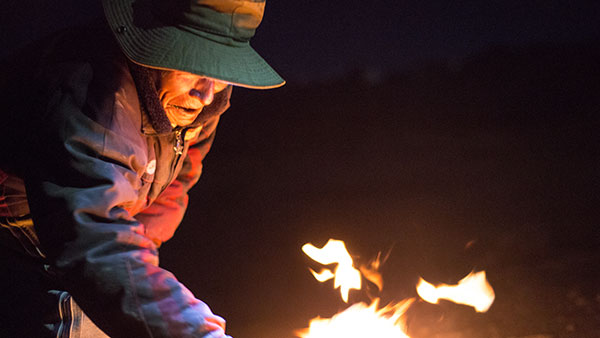 In the Andean traditions of Peru, a despachois a ceremonial offering to Pachamama (Mother Earth) and the Apus (Mountain Spirits). An elder performed the despachoceremony with coca leaves to protect Aikman while he was on the mountain. The elder asked the filmmaker to burn something meaningful in the ceremonial fire.

“I burned a hat I had gotten in Peru six years prior,” Aikman says. “A previous expedition to this site ended in tragedy, so the ceremony was especially poignant.”

Feeling the ‘mana’ in Hawaii 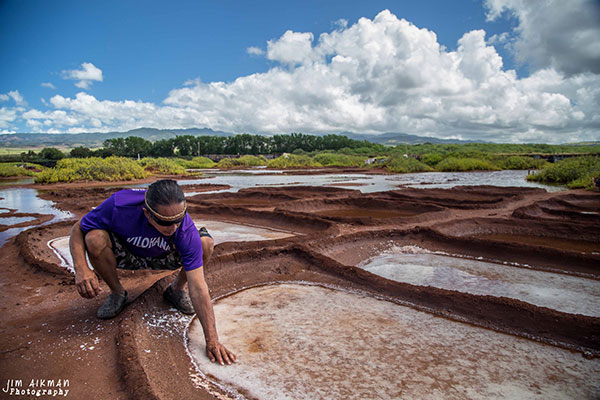 Aikman is currently working on a fund-raising project with elder Hawaiians in Kauai to restore a native village, farm, and gaming arena near Poipu.

“I was honored to participate in their ceremonies and to feel the ‘mana,’ or spiritual force, emanating from their sacred rocks,” he says. 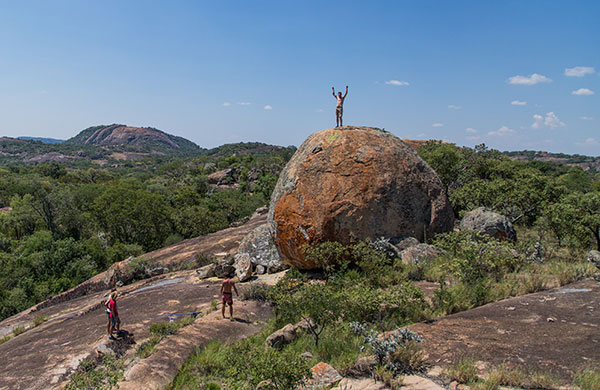 A first ascent is the Holy Grail in climbing. Aikman achieved that distinction when he did a “high-ball bouldering climb,” without using any safety ropes, in the Matopos Hills of southern Zimbabwe and earned the moniker “Lord Jim” on the route.

“No climbers had ever visited this place, and the granite boulders were very striking,” he explains. “Doing a first ascent was very meaningful for me, and revealed the awe of nature.”

“Work hard, be original, and innovate…”

These days, Aikman is devoting most of his time to directing two feature documentaries. One is the story of mountain worship in the Peruvian Andes where human sacrifice took place hundreds of years ago. It also is the place where the most compelling data on climate change can be found. The other film is the story of a native Hawaiian fighting for his national identity while protecting a sacred site from developers.

A blue teddy bear with a maize M emblazoned on it and a block M magnet that plays the Michigan fight song adorn his office in Portland.

“My education at U-M informed my work ethic and imparted high standards,” Aikman says. “It was a blessing to be surrounded by such brilliant students and professors, and it left me feeling obligated to do something special with my life.

“My advice to other Michigan alums is to work hard, be original, and innovate.”