Every day is game day 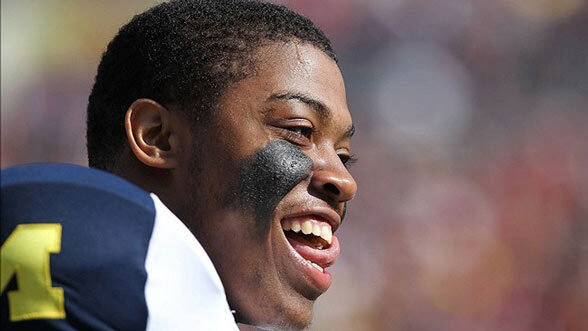 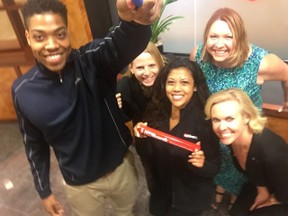 Kicking off the relay in April. (Image courtesy of U.S. Bank.)

Two summers ago, Jibreel Black, BA ’14, was in training camp with the Tampa Bay Buccaneers. (Alas, he never appeared in an NFL game.) Last year, he worked as a manager at an auto company. More recently, he decided to move to Los Angeles to pursue a career in acting.

But then he took a three-month detour. Since April 29, this former defensive tackle has built a house, cleaned up a park, and lent his talents to a Special Olympics soccer tournament, among many other things.

Black is nearing the end of a 12,000-mile, cross-country journey as a volunteer captain for the Community Possible Relay, sponsored by U.S. Bank. He is a key figure in the company’s nationwide initiative aimed to inspire more than 150,000 volunteers to take part in rebuilding and revitalizing their communities. And he is traveling to 38 cities in 25 states to do so.

Black is up to the challenge. He started 16 games for the Wolverines over a four-year career in which he played for coaches Rich Rodriguez and Brady Hoke.

“To play in an environment like the Big House against such a high level of competition has prepared me for anything in life,” he says. “Nothing is too big for me.”

Starting at the foundation 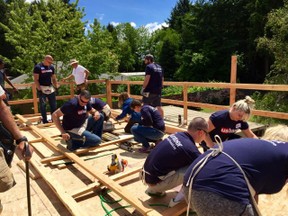 Building a home in Oregon. (Image courtesy of U.S. Bank.)

Shortly after Black settled in California, a high school friend working for U.S. Bank in San Diego mentioned the relay. She needed a co-captain for the tour, and while Black was intrigued, he was focused on acting classes and networking. But after intense thought and discussions with his manager, he jumped at the once-in-a-lifetime chance to see the country and make a difference.

The “big blue bus” kicked off the relay at the Orange County (Calif.) marathon, which included an event designed to inspire pre-adolescent kids to be more physically fit. The trek concludes in Minneapolis at the end of July. Along the way, Black will have passed the “mobile baton” to volunteers in Phoenix, Nashville, St. Louis, and Chicago, to name a few. Local volunteers are working before and after the relay comes through, but the arrival of the bus and the passing of the baton is an energizer.

Black’s favorite stop so far was in Eugene, Ore., where he assisted Habitat for Humanity in building a house for an older woman. That she had to spend more than 500 volunteer hours building homes for other people in order to qualify for her own home inspired him.

“That was the most amazing thing I’ve ever been a part of,” he says. “Building a house reflects life — starting at the foundation and working up.”

Time is of the essence 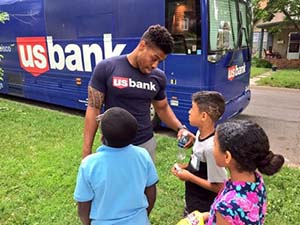 Fellow alum Reba Dominski, BA ’92, is a senior VP of corporate social responsibility at U.S. Bank. She also is president of the U.S. Bank Foundation. Philanthropic support through the U.S. Bank Foundation and corporate giving program reached $53 million in 2015. And employees volunteered more than 255,000 hours last year. Inspiring volunteerism is a major priority for parent U.S. Bancorp, and Dominski was happy to welcome Black aboard the “big blue bus.”

“Knowing Jibreel attended my alma matter and played for the Wolverines, I was confident he would be a very strong member of our team,” she says. “He approaches every day like it’s game day and our employees have really enjoyed meeting him.” 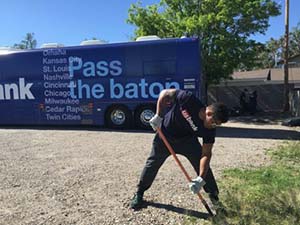 Digging it in Albuquerque. (Image courtesy of U.S. Bank.)

Black is no stranger to volunteering. As a Michigan football player, he regularly visited patients at C.S. Mott Children’s Hospital and worked at instructional camps to raise money for nonprofits. The Community Possible relay has provided him the opportunity to take his own civic engagement to the next level and see the country in a way most people never will.

Acting would suit the charming, gregarious Black should he pursue it post-relay, and his punctuality and self-discipline would suit him well in the corporate world. Regardless of where life takes him once he steps off the bus for good, volunteering is now second nature, he says.

“Time is the most valuable thing we have,” he says. “People really do appreciate it when you give your time. I plan to be less selfish about my time after this.”