All in the Olympic family 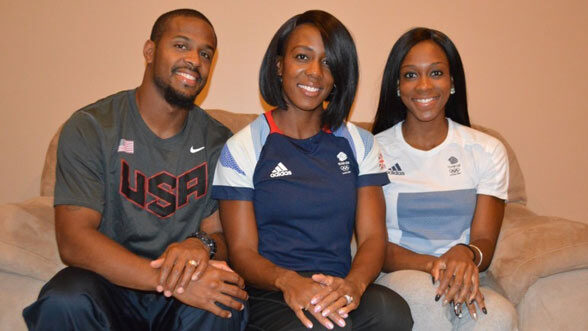 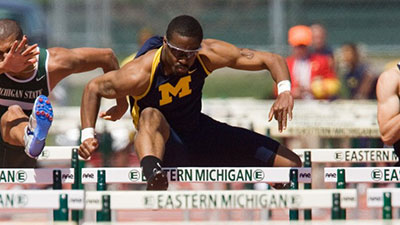 Now, as the 2016 Rio Games approach, the couple is preparing for an unprecedented family triple-header. Jeff is competing for Team USA, and Tiffany will be joined on Team Great Britain by her younger sister and fellow Wolverine, Cindy Ofili. Not only that, the three track & field stars will be running basically the same race, with the sisters in the 100-meter hurdles and Jeff in the 110-meter hurdles.

No matter the outcome, it will be a history-making, pivotal moment in each athlete’s life.

“Having the three of us — a husband, a wife, and a sister — competing in the same event at the Olympics,” Jeff says, “you can’t dream stuff like this up. The fact that we’re all here at this point is nothing but a blessing. But it’s surreal. I used to watch Cindy in middle school, getting better every year. I used to watch Tiffany get better in college. And then, ‘Oh (crap), even I got better!’ And now, this is our chance.”

“How much better can it get to have your support system there with you — and to celebrate their successes as well?” Tiffany says.

“Every athlete dreams of being on that stage,” adds Cindy, who is pursuing a degree in education. “It’s my ultimate goal. But to also be there with my family [will be] an amazing feeling.”

U-M athletes ready for the Rio Olympics, plus a complete list of Wolverines going for the gold.
“I broke all of them,” Cindy says. “I was very honored because my sister has accomplished so much at this University. To be in the same conversation with her is an honor, let alone breaking her records. It was a great experience.”

Tiffany says, “I told my sister, ‘I made a name for myself in athletics, and I feel so tremendously blessed. But now it’s time for you to go out and make your name!’ And she’s made a name for herself! When she came to the University, it was, ‘That’s Tiffany’s little sister.’ But, honest to God, recently somebody wrote a caption on my Instagram page: ‘This is Cindy’s sister.’ It’s gotten to a point where she’s done such great things that she’s exceeded my records here at Michigan, which has been a huge blessing. If anyone’s going to break your records, why not keep it in the family?” 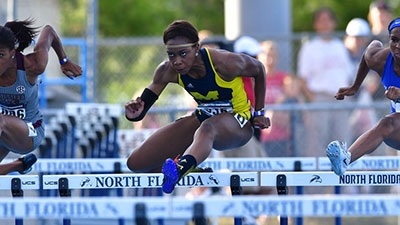 Both sisters cite Wolverines women’s track and field coach James Henry as a key contributor to their success. Henry, incidentally, also predicted marriage for Jeff and Tiffany the first time he saw them together.

“He’s been a huge aspect of my career,” Tiffany says. “I do have a different coach now, but [Henry] still gives me pointers. He knows me and has almost been a father figure. He’s a great coach and a great man, a Michigan Man.”

Cindy concurs. “He’s an amazing coach. I honestly wouldn’t be who I am today without Coach Henry. He’s helped me not only as an athlete but as a person. He’s given me speeches and things that have stuck with me mentally.”

Jeff and Tiffany also won the Big Ten Medal of Honor — awarded annually to one male and one female member of the senior class at each conference institution who exemplifies proficiency in scholarship and athletics.

Tiffany graduated from U-M’s College of Pharmacy in 2012 and is a pharmacist for CVS in Canton, Mich., where she and Jeff live. Jeff is a special projects coordinator in the Michigan Athletic Department and has a master’s degree from nearby Eastern Michigan University in Higher Education and Student Affairs. He’s pursuing a doctorate at EMU in Higher Education Leadership.

“Every time I watch my sister or Jeff run,” says Cindy, “my heart pounds even more than it does in my own races. I want to see us all do well. It’s like we’re the same person.”
This will almost certainly be the last Olympics for the husband and wife, but Cindy, 21, hopes to compete in 2020 and beyond.

“I’m going to be running for a while,” says Cindy, who just completed her senior season at Michigan, where she majored in education.

Jeff plans to retire after this quest, and his wife likely will, too.

“To be honest,” adds Tiffany, “I’m probably 90-percent sure this will be my last Olympics because I am very excited to begin the next chapter of my life with starting a family and working in the pharmacy.”

So do the athletes hope any potential offspring will follow their path to the Olympic Games in, say, 2040?

“I don’t know,” Jeff says, laughing. “But you can be damn sure I’ll be in the stands somewhere, losing my mind. Tiffany says our kids might be violinists. And I joke, that if they play piano, I’ll be in the front row saying, ‘Hey! That’s my son! That’s my daughter! They played the hell out of Mozart!'” 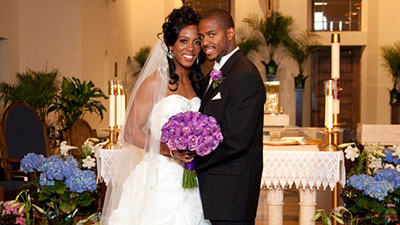 Few could have anticipated this Olympic feat back in 2005 when Tiffany, a freshman, “friended” Jeff, a junior, on Facebook.

“She was looking to connect with the hurdlers on the team,” Jeff says, “and I was one of the few. I saw this little freshman girl, but I didn’t think anything of it at the time. But because I was a hurdler and she was a hurdler, we started doing more and more workouts together.

“She couldn’t stand me,” he continues. “She thought I was arrogant, cocky, cursed a lot and drove fast — everything she couldn’t stand. The funny thing about it is that Coach Henry would tell Tiffany, ‘Hey, watch, you’re going to end up marrying that guy.'”

“I said, ‘Coach, there ain’t no way! I can’t stand him,'” Tiffany says. “Look at us now, 11 years later. Jeff was very boisterous, but I can see the evolution of 19-year-old Jeff to 30-year-old Jeff. So, it’s been quite the ride. He’s grown so much into a strong, intelligent, and assertive man who is doing such great things, finishing up his PhD (at EMU) and working in the athletic department at the University.”

The athletes were married May 7, 2011, in Ypsilanti, Mich. Cindy was their maid of honor. Tiffany wears a diamond wedding ring on her left hand; on her right hand she wears five gold bands, interconnected like the Olympic rings. 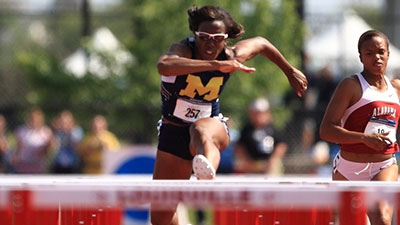 Tiffany and Cindy were born in the U.S., but their parents, Felix (Nigeria) and Lillian (Great Britain), came from the other side of the Atlantic Ocean. The sisters have citizenship in three countries, but both chose to compete for their mother’s homeland.

“I’ve always been proud of my multi-national background,” says Tiffany, who competed for Great Britain in the London games. “It’s part of my identity and something I cherish. Great Britain offers the best situation for me to flourish because they support their athletes and give you what you need to be successful. It’s been a great decision for me.”

Cindy says she chose the same team “because my sister advised me on it, and doing this was the best decision I could’ve made. I’m so happy to represent Great Britain.”

Jeff, a New Jersey native, will compete for the U.S. a second time. He recalls that pinch-me moment when the Olympic “dream” became a reality in 2012.

Read more about the athletic dynasty that produced the Ofili-Porter powerhouse.
“Walking onto the track for the first time in practice and realizing that I’m at the Olympics, seeing the (Olympic) rings everywhere,” he says, “I remember getting through the preliminary round and saying, ‘Oh, my God, I just got through the first round of the Olympics!'”

Jeff came close to making the finals but was eliminated in a semifinal heat. Tiffany, running with a back injury, also was gone after the semifinals.

Soon after the London games, Tiffany and Cindy were looking to Rio, says Jeff.


This story is repurposed courtesy of mgoblue.com.

STEVE KORNACKI is a veteran journalist who joined the Michigan Athletics team in the fall of 2014. He has covered U-M for the Detroit Free Press and Ann Arbor News, and he wrote about two Heisman Trophy winners (Desmond Howard and Charles Woodson) and two national champions (1989 basketball, 1997 football). Kornacki has also worked for the Tampa Tribune, Orlando Sentinel, and Fox Sports Detroit, and he is the author of Go Blue! Michigan's Greatest Football Stories (Triumph Books), with a foreword by Lloyd Carr.
Social
Share on: Share on Twitter Share on Facebook