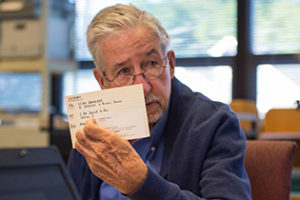 Always at the edge of the possible and the visionary. Ever able to formulate our best hopes and fears into language that elevated and instructed. Baseball fan. Wanting to recast the radical tradition into American idiom and take it out of the hands of sectarians. Willing to be, as our friend Jack Newfield put it, in a prophetic minority but always looking for the route to majoritarian progress.

It was Tom who found the “phrase participatory democracy” in another of our friend’s work, Professor Arnie Kaufman, and made it an anthem. If Carl Oglesby was the one who took the English language and in his eloquence fueled the anti-war movement, it was Tom and others of our cohort who strategized that movement and led it to a kind of victory in the ‘70s.

When Tom came to Ann Arbor after the summer of 1961, impressed with Berkeley’s SLATE political party, he and Ken McEldowney and Andy Hawley initiated the VOICE political party. Then, Sharon Jeffrey and I led VOICE into SDS and won seats on the student government. VOICE became SDS’ largest chapter with broadest campus support. It was Tom who had the vision of student political parties as a democratic vehicle for progressive agitation.

When Tom was drafting the Port Huron Statement, Al Haber and I were nominally on the drafting committee with him. He would send us ideas and pieces and reports of what he was reading. We were pretty much the cheering section. When we worked on it at Port Huron’s AFL-CIO camp it was Tom who devised the means of having a democratic discussion of a very large document; the division of it into debatable bones for which a larger drafting committee would finalize the mandated flesh. 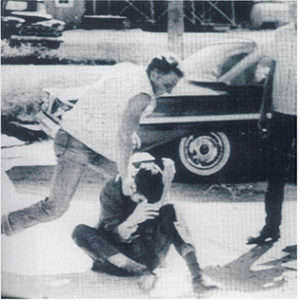 White supremacists pull Hayden from a stopped car and beat him in McComb, Miss., 1961. (Image courtesy of the Tom Hayden Papers held at the University of Michigan Library.)

In retrospect, amidst all the serious work (and, as the Vietnam War wore on, increasingly grim work), there were some moments of hilarity. On the night of the big anti-war demonstrations during the 1968 Chicago Democratic National Convention, Tom was concerned that members of the Chicago Police Department would try to kill him. As the rally in Grant Park ended and demonstrators began the technically forbidden march through downtown, Tom and I got into the car of a journalist and with his press pass as a passport, got through the police lines and out of the park. Back on the South Side at my apartment, Tom used theatrical glue to apply a false beard; then he put on the hat I used for fishing as a way to disguise himself. We returned in our magic carpet press car to Michigan Avenue to take up the march. As I recall it in my mind’s eye, in his disguise he looked just like Tom Hayden in a silly get-up.

Thinking about our current situation I am reminded that when Tom ran for Senate in California, he created an organization called the Campaign for Economic Democracy and used that idea to signify egalitarian policies that would still be relevant. And in his last few years his newsletter kept referring to The Long War – a term he used for the whole disastrous Middle Eastern theatre.

A the beginning of our era and until the end of his life, Tom had a prophetic voice. That voice, needed now so very much, will be sorely missed.

Ross is a research professor of sociology at Clark University (Worcester, Mass.) and its Mosakowski Institute for Public Enterprise. He is the author of the book Slaves to Fashion: Poverty and Abuse in the New Sweatshops (2004).

About the Author
ROBERT J.S. "BOB" ROSS is a professor in the sociology department at Clark University in Worcester, Mass. He received his BA from U-M in 1963, and an MA and a PhD from the University of Chicago in 1966 and 1975, respectively. He has been at Clark since 1972. Ross is the former director of the International Studies Stream and was among the founders of the program in Urban Development and Social Change. He currently teaches on a part-time basis and is the author of the book Slaves to Fashion: Poverty and Abuse in the New Sweatshops (2004)
Social
Share on: Share on Twitter Share on Facebook