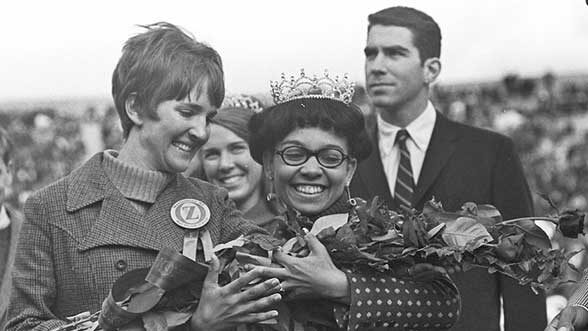 It was 1968, the most turbulent year yet in that most turbulent of decades. And even though Opal Bailey, BS ’69, was a strong supporter of civil rights, she never expected to be the focal point of national publicity amid a protest against institutional racism at the University of Michigan.

Yet there she was, standing nervously on stage in the University’s cavernous basketball arena before a crowd of thousands, explaining why the black groups on campus were boycotting that year’s homecoming queen contest.

Bailey, an African-American senior majoring in psychology, had been thrilled to be elected queen in 1967. But the taint of racism that she and others felt following her victory had soured her toward the program. 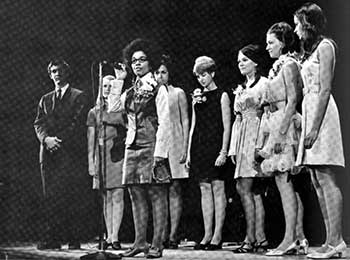 As the 1968 program drew near, the homecoming committee planned for the outgoing queen to place the crown on her successor’s head. This would happen during a brief ceremony preceding a Thursday night concert by Dionne Warwick. But at the appointed hour, Bailey simply handed the crown to a committee member standing nearby and walked off stage.

The story of the “snub” went out over the newswire and was reprinted in The New York Timesand other media outlets across the country, under such headlines as “Negro Balks at Crowning White Girl.” Because of the controversy, Michigan canceled the queen contest for 1969, and, has opted (more or less) to forgo the event ever since.

In fairness it should be noted that the University survived without a homecoming queen for close to 150 years before it introduced this brief, albeit ill-fated, “tradition.” The ceremony debuted in 1966, but it never seemed to gain traction with the campus community. Throughout the years, though, spirited students have sought to revive the custom — with mixed results, no shortage of controversy, and at least one law suit.

A span of 50 years can dim even the sharpest of memories. For Bailey certain moments of her reign as Michigan’s second homecoming queen stand out clear and strong, while others are lost in the mists of time.

“I remember when they announced the winner on the Diag,” she says. “I was standing behind the podium with the other finalists. It was the same as with most competitions, where the runners-up are called first. They kept calling out names until only two of us were left, myself and another girl. She was from one of the elite white sororities and into a lot of stuff on campus. She was very pretty and had short, blonde hair. When they called her name as the first runner-up, I just remember her mouth dropped open. Mymouth dropped open. I couldn’t believe it.”

Bailey recalls being congratulated by the other contestants after the announcement. Applause from the crowd was robust, thanks to the many black students who turned out in a strong show of support. The next day Bailey rode a float in the homecoming parade and on Saturday she appeared before a crowd of 66,000 at Michigan Stadium. It was halftime during the football game against Indiana.

“A total lack of intelligence”

“I was just excited. I was happy. It wasn’t until later that I found out there had been booing.”
If there was an undercurrent of resentment among certain elements on campus about a black woman being homecoming queen, this was when it began to surface.

Three of Bailey’s sorority sisters decried the situation in a letter published Oct. 24, 1967, in The Michigan Daily.They were horrified, they wrote “… to see the total lack of respect shown to Opal Bailey as she walked across the football field. The entire student body stood in the stands mute; not even extending the courtesy of clapping. There was silence in the stadium.

“Yes, they proved their point. Everyone now knows that the student body disapproves of a Negro’s selection [as homecoming queen]. However, in showing their disapproval in such a way, we feel they also demonstrated poor judgment, poor parental upbringing, no courtesy, and a total lack of intelligence.”

Bailey’s recollection is somewhat different. She doesn’t remember the silent stadium but does recall being told that some people in the audience booed as she was escorted across the field.

“I didn’t hear the booing,” she says. “It was other people, like my parents and brother, people who were in the crowd, who heard the boos. When I was announced and walked across the field, I was just excited. I was happy. It wasn’t until later that I found out there had been booing.”

Bailey experienced no overt racism from classmates during her reign as queen. “All the black students were thrilled, and the white students I knew, they congratulated me, came up to me and said nice things. Nobody was confrontational. I would remember if somebody threw an egg or yelled something to my face.”

There was, however, one letter Bailey thinks she may have received in care of a Detroit newspaper in response to a story they published about her. “It was addressed to ‘Homecoming Queen, Michigan,’ or something like that,” she says. “I don’t know where it was from.”

Even though the letter called her the most vile and racist names, Bailey was more taken aback than offended. “I was like, ‘Oh, my God! For being homecoming queen? This engenders so much hatred of me?’ I was shocked. I mean, it wasn’t like it was an interracial marriage, for crying out loud! All I did was win a homecoming queen competition, and you would’ve thought I’d done some really radical thing. It was crazy. I’m like, ‘You gotta be kidding me. I’m homecoming queen, and I get called something like that?’ I mean, what the hell?” 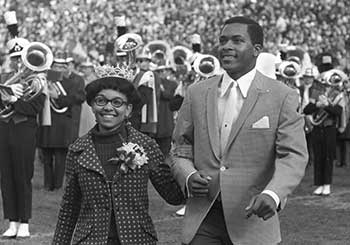 A beaming queen is escorted on the field at Homecoming, 1967, by Gerald Peaks. (Image: Jay Cassidy, courtesy of U-M’s Bentley Historical Library.)

Ironically, the next year Bailey did join other student activists on campus, playing an important role in the high-profile student protest following the assassination of Martin Luther King Jr.

Nineteen sixty-eight saw an explosion in political protest and violence across the country and around the world: Prague Spring, the Columbia University occupation, the Paris student revolt, the shooting of Robert Kennedy, the Democratic National Convention in Chicago, and more. Back in Ann Arbor, there was a feeling of revolution in the air, and when the homecoming queen contest was announced again in September, controversy arose almost immediately.

Many — including the victor herself — believed the deciding factor in Bailey’s win the previous year had been the talent competition. Her performance included a recitation of the civil-rights poem “Midway” by Naomi Long Madgett, set to music that Bailey had composed herself and recorded in two-part harmony on reel-to-reel tape, plus a modern, interpretive dance.

For the ’68 contest, however, black groups charged that the selection criteria had been changed, de-emphasizing talent and academic achievement in favor of beauty and poise — a move they saw as designed to prevent another African-American woman being chosen as queen. The homecoming committee denied the charges and apologized for what they said was a simple misunderstanding.

Then, during the judging, the contest’s lone black entrant objected to questioning that she found insulting and discriminatory, and withdrew her name from consideration.

Black student leaders came to Bailey and asked if she would be willing to make a statement at the Dionne Warwick concert when the new queen would be crowned. She agreed.

The national political climate had changed drastically over the previous 12 months, and to prepare for the protest Bailey decided to adopt a new look, one that better reflected the growing Black Power movement.

“I didn’t normally wear my hair in an afro because my hair texture doesn’t lend itself to that style,” she says. “For that night, though, I literally teased my hair all over to create the afro. I had to work to get my hair to stand up like that. The outfit I wore was brown, with a vest and skirt, and I think it was vinyl but made to look like leather. Call it getting into character!”

Warwick told Bailey that she had carried herself with grace, “like a true queen.”
Arriving at the University Events Building (now renamed the Crisler Center), Bailey was thrilled to meet Warwick backstage. “I was a big fan, knew all her songs, could sing all her songs. I told her what I was going to do, to make a speech and not crown the new queen, and she advised me not to do it. I thought, ‘Oh, crap.’ But it wasn’t like she was mad or anything. It was more like an older person trying to prevent a younger person from doing something that could be detrimental to them. I think she was trying to protect me.”

Warwick’s advice notwithstanding, Bailey went before the crowd and made her protest as planned. She remembers it as being more or less a straightforward explanation of why the black students had boycotted the contest. The Ann Arbor News reported that one of the things Bailey said was, “To those of you who hissed at me last year, I’m black and I’m proud of it.”

After finishing her statement, Bailey handed the crown to a committee member and walked off the stage. That’s when she saw Warwick again.

“Dionne congratulated me,” Bailey remembers. “She said she admired my courage, and that I’d acted like a queen. That I’d done it in a very appropriate manner and had carried myself with grace like a true queen. I was so pleased to hear that!”

Reports of the Michigan homecoming hullabaloo circulated widely in the press — in one case reaching halfway around the world. “My parents were in Thailand,” Bailey says, “because my dad worked for the State Department, at the Agency for International Development. I got a letter from him, and he said that one of his co-workers called his attention to a story in Stars and Stripes.It was about me and the homecoming queen incident. I couldn’t even believe it. That’s how they found out!”

“For the record, I loved Michigan, and I loved my college experience … Today I’m not as radical as I was when I first got out of college, but I’m definitely very open-minded and accepting of people different from myself.”
After graduating in 1969, Bailey worked as a psychologist, then later as an attorney and real estate broker. She doesn’t maintain any negative feelings about what happened those last years in Ann Arbor.

“For the record, I loved Michigan, and I loved my college experience,” she says. “But it definitely changed me. I went in as a pretty naive freshman who believed in the domino theory of the Vietnam war. By the time I graduated, I was a quasi-pseudo ‘revolutionary’ who no longer subscribed to the domino theory, and was completely suffused with a new black nationalist consciousness. Much to my parents’ chagrin!”

After a moment of reflection, she adds: “Today I’m not as radical as I was when I first got out of college, but I’m definitely very open-minded and accepting of people different from myself. I can get along with anybody, and I think that a lot of that had to do with my life before Michigan, when I mostly lived abroad, due to my father’s State Department assignments. But then I think a lot of it had to do with my life at Michigan because I met a lot of different types of folks there.”

(Note: This story was updated on Feb. 16, 2017. The original copy stated incorrectly that Opal Bailey was U-M’s last black homecoming queen. Throughout the years spirited students revived the contest as one-off events a handful of times. In 1980 and 2007, African American students Sherrie King and Gabrielle Sims, respectively, wore the homecoming queen crown. King’s 1980 “election” also was mired in controversy and charges of racism. MT regrets the error.)