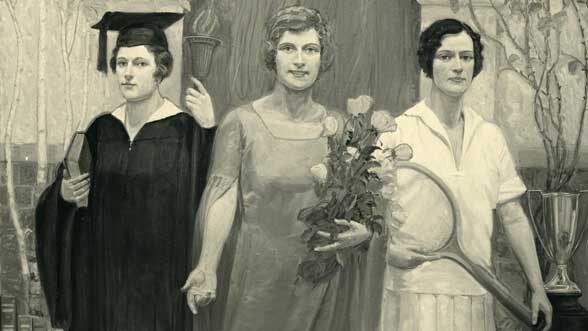 When the Michigan League opened its doors in 1929, the first visitors soon found their way to the women-only lounge dedicated to Ethel Fountain Hussey — “the living room around which all activities will gravitate,” as the souvenir program put it.

Gazing upward to just below the ceiling, they saw murals depicting great women of the past, among them Joan of Arc, Queen Isabella of Spain, and the Greek queen Artemisia I.

But the most prominent mural, stretching across the northern wall, depicts a young woman of the 1920s. She appears in three modern guises — a somber scholar in gown and mortarboard, holding the lamp of knowledge; a stern athlete in tennis duds; and in the middle, a smiling, blond belle in an evening gown, holding roses with her left hand and extending her right hand in welcome. 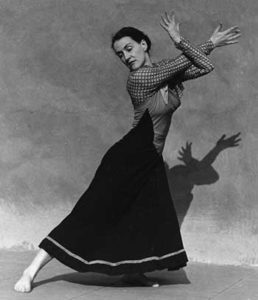 The model for all three portraits was Marian Van Tuyl, (a 1928 graduate of the School of Education), perhaps the only Michigan student ever depicted in a permanent piece of campus architecture.

It’s hard to tell from surviving records just who chose Van Tuyl as the model for the painter James Edward McBurney. It might have been Alice Crocker Lloyd, the dean of women, who was intimately involved in plans for the League. Or it might have been the League’s architects, the brothers Irving and Allen Pond, who had designed the Michigan Union in the mid-1910s.

But whoever chose her obviously knew Van Tuyl was one of the campus’ leading women.

Born in 1907 and raised in the tiny Michigan farm town of Wacousta, near Lansing, Van Tuyl was an all-A student, a member of the Alpha Omicron Pi sorority, and a top choice for several honorary societies.

But she was best known for her work in campus theatricals, chiefly as a dancer but also as an actress and producer.

In an era when all forms of student theater were big events, she took a lead role in the Freshman Pageant; created all the costumes for the Sophomore Circus; and produced all the dancing for the Junior Girls Play, an expansive production with a cast and crew of nearly 150 women.

Her longest run, though, would be on the northern wall of the League’s Hussey Room.

The dedication of the League was not only a major event but also a symbolic act by the University’s alumnae — a declaration 60 years after the start of co-education at U-M that Michigan women had taken their proper place as equal partners of Michigan men.

McBurney, of course, painted in color. But the mural is challenging to photograph well due to its location in the League. The black & white print above comes courtesy of U-M’s Bentley Historical Library.
“The University of Michigan League is the sister of the Michigan Union — not a cousin or an aunt or a neighbor — but a real sister,” Irving Pond wrote at the time of the dedication. “If the symbols in the two buildings are similar, it is because they express the same basic philosophy of life — that of the development of character, from its striving for physical perfection to its striving for the utmost heights of mentality and spirituality.”

Philosophy was one thing; status and power quite another. The facts were clear — men still far outnumbered women in U-M’s administration, faculty, student leadership, and graduate schools.

But “Young American Womanhood,” however trite it looks in 2017, may well have been designed as a subtle dig at an earlier generation of men — the ones who had opposed the admission of women in the first place, and perhaps to those who still harbored doubts about women sharing the campus with men.

In the 1800s there had been three main objections to co-education — that women were physically too weak to withstand the rigorous demands of college life; that they were not smart enough for a college curriculum; and that study would “masculine-ize” them.

The likenesses of Marian Van Tuyl in the Hussey Room refute all three. In scholarly robes, she asserts the strength of women’s intellect. In tennis dress, she announces their physical fortitude. And as a smiling belle, she says a woman in college remains feminine and beautiful.

Marian Van Tuyl fulfilled her early promise and then some.

After graduating, she taught dance at the University of Chicago. Soon she trained in modern dance under the legendary Martha Graham; performed professionally; formed her own touring company, the Marian Van Tuyl Dance Company; and became a choreographer, scholar of dance, and pioneer in dance education.

Van Tuyl is credited with splitting dance education away from its roots in women’s physical education. “The only thing we share with physical education is the space and the showers,” she remarked in 1959.
She settled in San Francisco, where she married a psychiatrist and raised three children. But much of Van Tuyl’s time went to her work at Mills College, where she founded and directed the first dance department in the U.S. She taught there from 1938-70; produced a leading dance magazine, IMPULSE; and edited two textbooks on dance.

She also is credited with splitting dance education away from its roots in women’s physical education.

“The only thing we share with physical education is the space and the showers,” Van Tuyl remarked in 1959, “and dancers are too busy to take many showers.”

After retiring from Mills, she served on the California Arts Commission. She died in 1987.