Everybody's had to fight to be free 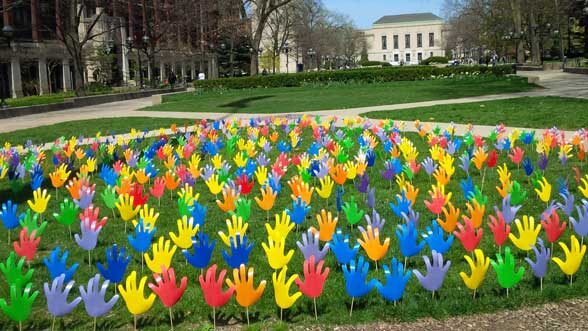 A show of hands 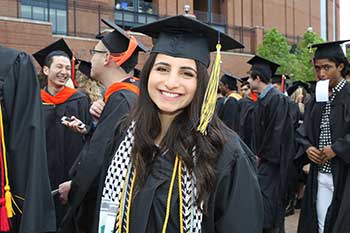 It’s a beautiful spring day on the U-M Diag. A throng of students surges to class, past tables and posters promoting campus events and causes. On this day though, something as colorful as the well-groomed flower beds at the base of the flagpole is fluttering in the breeze. It’s a striking display of paper cutouts, each with a comment about the global refugee crisis. Curious passersby stop in their path, intrigued by the poignant, timely message. Many students chat with the smiling young woman sitting at a nearby table.

Her name is Nicole Khamis, BA ’17, founder of the Michigan Refugee Assistance Program (MRAP). The student-led MRAP seeks to find ways for Michigan students to help Syrian refugees fleeing the country’s civil war. The conflict is among the world’s most deadly, with nearly half a million killed, and millions more displaced in Syria and the surrounding region.

Khamis founded MRAP in September 2016, developing relationships with such agencies as Jewish Family Services, Samaritas, and the Detroit Mayor’s Office. MRAP connects U-M students with refugee families as both a source of help and to promote cross-cultural understanding. A Books Not Bombs effort to provide refugee students with scholarships is also part of the group’s work.

Khamis says she was feeling overwhelmed by the barrage of refugee stories in her newsfeed when she realized U-M students could be a resource for displaced people in Ann Arbor and the surroundings.

“When it came to my organization, I thought young people could help in some way,” Khamis says. “You see all these refugees and people crossing the desert to get to Jordan [from Syria]. People look at that and they want to do something. This is the case with Michigan, especially as a university, because people care and they want to make a difference somehow.”

As MRAP came together, Khamis spoke with potential partners and identified roles in which students could be most valuable to refugee resettlement agencies. Many Arab-American and Arab-speaking MRAP members now volunteer as translators.

About 40 U-M students have participated with MRAP as liaisons for 10 refugee families, with about 50 family members in total. One family Khamis helped lives in Dearborn, a city just outside of Detroit known for its large Arab population.

“The first day I met my family, I took them out to my favorite restaurant in Dearborn,” Khamis says.“Then I showed them grocery stores and transportation. My mom helped one of them get a job at a local restaurant.”

Beyond a sense of work or duty, “advocating for these individuals is sometimes fun,” Khamis says. “They don’t know the laws. They can’t speak English that well after three months and so it is fun just to give a helping hand.”

“Nicole has such clarity of vision and purpose in wanting to improve the lives of refugees,” she says. “This vision, coupled with her remarkable intellect and her strong interpersonal, communication, and networking skills, made it possible for her to build MRAP in only one year into a very strong student organization with highly committed, talented students taking it forward now.”

It was through her own efforts combatting campus Islamophobia that Horton first connected with Khamis and other students. As the organization developed, she quickly recognized its potential.

“I think MRAP is a brilliantly conceived student organization because of its two-fold mission: to educate students and others in our community about the extreme hardships that refugees face when relocating to a new country such as the U.S., and to involve students as directly as possible in supporting refugee families in this transition,” Horton says.

“I have worked with newly arrived refugees and seen how difficult it is for them to adjust,” he says. “Resettlement agencies are doing the best they can, but without the help of volunteers who are willing to sacrifice their time things would be much more difficult.”

Refugees infuse up to $295M per year in southeast Michigan economy
As it is with Al-Jarrah, Khamis’ family history feeds into her motivation for helping refugees. Of Palestinian-Christian descent, she says her father’s family fled to Ramallah in the West Bank in 1948 upon the creation of the state of Israel. Her mother’s family fled there in 1967 during later conflicts. She said her awareness of conditions for refugee families and their descendants began on family visits to Palestine where she would be called “lucky woman” by those she would meet. As an American citizen, after all, “it was so easy to get up and leave the situation,” she says.

Expanding on her work with refugees coming to the U.S., Khamis has returned to the Middle East through a one-year Fulbright Fellowship teaching English to Palestinian girls in a refugee camp in Jordan.

“I feel very lucky and just very grateful I have the opportunity to continue my work in a different way, but also in a way that I hope will help me understand better refugee policy and how that impacts people on the ground,” she says.

Helping refugees is something Khamis sees as a part of her life and future career.

“I want to go to law school to focus on refugee and asylum law,” she says. “From there, I want to look at responding to policy domestically and internationally wherever I find that refugees are seeking asylum. That’s what I want to focus on long term.”

With the war in Syria and conflicts in other countries producing millions of refugees, it is certainly a passion and skill the world can use.

While many in MRAP are of Arab heritage or from countries that have historically been torn apart by strife, Khamis believes anyone, no matter their ethnicity, can feel compassion for refugees.

“Even if something isn’t affecting you, we should all understand that it’s everyone’s responsibility to help others,” she says.


With so many crises in the world, it’s no surprise that other refugee organizations exist on campus. Another recent organization is Students for Syria, founded in November 2016.