From Moog to Mannheim 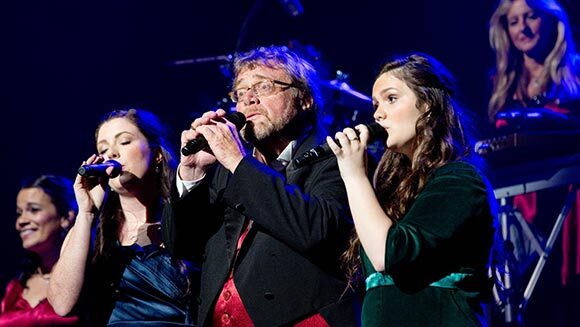 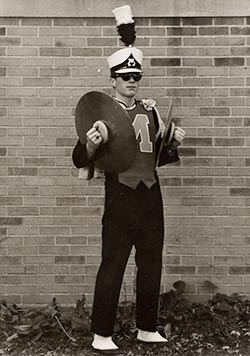 The year 1965 marked a turning point for America and for an aspiring young musician named Chip Davis, BMus,’69.

In the fall, Louis F. (Chip) Davis Jr., a small-town boy from Ohio ─ who was destined to become a legend in the music world ─ entered the University of Michigan to major in bassoon, following in the footsteps of his parents, both talented musicians who studied at U-M.

“There was a lot of turmoil on campus during the Vietnam era,” Davis recalls. “I wasn’t involved in that kind of stuff, because I was there for college. Besides, being in the Michigan Symphonic Band was like having a full-time job.”

While student activists chanted anti-war slogans at teach-ins, Davis spent his weekends sequestered for long hours in a practice room at the then-School of Music on North Campus, working on difficult bassoon passages in band pieces. “[Band Director William] Revelli was tough, and I knew he would go down the line and make you play your part,” Davis says. “It was terrifying to a certain degree.” 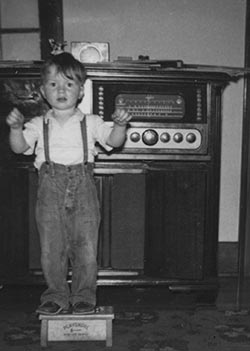 Davis gets off to an early start in his Hamler, Ohio, home. (Image courtesy of Chip Davis.)

Playing the cymbals in the then-all-male Michigan Marching Band also presented challenges for Davis, who got his early start in music by singing soprano in church and all-boy choirs. “[Assistant Band Director George Cavender] had been a Marine drill sergeant in World War II, and he was a stickler for precision,” Davis remembers. “On the practice field, we’d be standing on our right legs while he went around checking for a 90-degree angle on our left legs. It was all about discipline.”

Davis’ greatest thrill came the first time he emerged from the tunnel onto the football field at the Big House. “My dad, who played clarinet in the U-M band, told me, ‘Your knees are going to turn to jelly,’ and he was right,” Davis says. “It was a ‘wow experience’ to see 100,000 people in the stands. I was pretty awestruck.”

When he wasn’t practicing, Davis attended the annual May Festival performances by the Philadelphia Orchestra, sang in the University Musical Society’s Choir Union, chowed down at the Pretzel Bell restaurant, and quaffed 3.2 beers to the sound of English rock music in Toledo (Ohio) pubs strewn with peanut shells.

Davis, who recently threw a gala 70th-birthday party for himself on his 150-acre farm near Omaha, Neb., still chuckles about some of his mishaps at Michigan. Once he showed up at Hill Auditorium for a band performance, only to realize he’d left his music in his East Quad dorm room. “I had to play the whole concert from memory, although I probably cheated a little and peeked at another guy’s music,” Davis confesses.

Little did he realize after leaving Michigan in 1969 that he would become a trailblazer in New Age music and attract fans from around the world.

Home for the holidays

“I have always liked Christmas music, but I was most interested in the Renaissance origins of Christmas carols,” Davis explains. “Hence, I wrote ‘Christmas Suite,’ which is a suite of four carols played on Renaissance instruments — that I played myself. That got me started on the first Christmas album.”

This year, Davis and his cohort of classically trained, rock-loving musicians will perform at the White House Christmas tree lighting ceremony for the third time, following similar gigs for Bill Clinton and George W. Bush during their presidencies. “We always get invited into the White House afterward for cookies and hot cocoa, and a quick photo with the President,” he says.

The biggest influence on Davis’ career as a composer was the emergence of new technology. “I came along at the beginning of synthesized music,” he says. “There was a big rabble in the classical community about synthesizers, which were viewed as cheap, copycat music. On the other side, the rock ‘n’ roll guys were putting down classical music. So I decided to cut down the center, and that’s when I came up with my idea for Fresh Aire, a music series that incorporates synthesized music alongside acoustic music.” 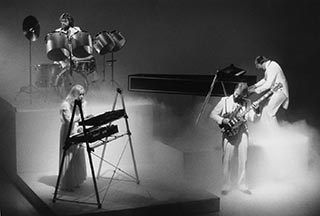 Davis on drums in the original Mannheim Steamroller. (Image courtesy of Chip Davis.)

In the early 1970s, Davis “didn’t have two cents to rub together,” so he wrote music for advertising jingles produced by an Omaha-based ad agency in return for studio time. One of his clients, Bill Fries, hatched the idea for a fictitious singing truck driver named C.W. McCall and asked Davis to compose music for some catchy lyrics. Fries also became the gravelly voice of C.W. McCall, and their first song, “Old Home Filler Up and Keep on a Truckin’ Café,” quickly became a hit. A single release, “Convoy,” dovetailed with the CB radio craze of 1975 and was scooped up by millions of fans. The next year, Davis was named the Country Music Songwriter of the Year by the performing rights organization SESAC. Two years later, actor Kris Kristofferson played the lead role in the movie Convoy.

With money in his pocket, Davis ramped up production of Mannheim Steamroller’s nature-inspired Fresh Aire music series, a mash-up of authentic period instruments — such as harpsichords, lutes and recorders — and Moog synthesizers. He launched the American Gramophone record label in 1974 to distribute his albums after mainstream record companies turned him down, and won his first Grammy Award, for Fresh Aire 7, in 1991. At one concert in Omaha, Davis and his group played the opening set as Mannheim Steamroller, then changed their jackets backstage and reappeared as the featured C.W. McCall country band.

“I don’t think the audience even noticed it was the same five guys playing both sets,” he laughs.

One of Davis’ keepsakes is a photo taken with the late-actor Leonard Nimoy, a.k.a. Mr. Spock on the popular “Star Trek” television series. When they met at a Space Foundation event, Nimoy told him, “I’m a big fan of yours, and I have every album you ever made.” Davis says. “That blew me away.” 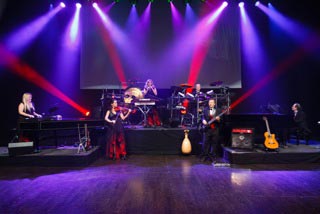 With 19 gold, eight multi-platinum and four platinum-certified records, Davis ranks among an elite cadre of artists. Several years ago, Steve Shipps, a featured violinist with Mannheim Steamroller since its beginning, came to him with an unusual proposal. Shipps, now professor of violin and senior adviser to the Dean for International Study at the U-M School of Music, Theatre and Dance, asked Davis if he would donate money to build a multimedia innovation lab at the school.

“I decided it would be an exceptionally cool thing to do since I was in the first class to use the Music School building when it opened,” Davis says. In 2015, he contributed $1 million toward construction of the Chip Davis Technology Studio.

“I’m grateful that the training I received at Michigan helped to put me on my feet musically so I could do the things I do now and have a lot of success,” Davis says. “I wanted to share back.”