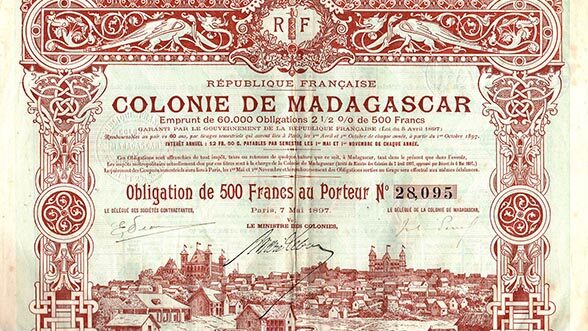 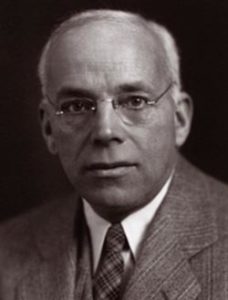 “Hereward Thimbleby Price” sounds like a fictional character in a cozy English mystery. But Price was quite real, and his half-century journey to the University of Michigan was even more extraordinary than his name.

His father, a British missionary, sailed with his wife for the African island of Madagascar in 1874. In the village of Ambatolahinandrianisiahana (scroll to the bottom for more about that), the Prices built their own house and planted a garden for food. In 1880, they had a son. For reasons lost to history, the parents gave the boy his mellifluous moniker, perhaps inspiring the love of words that would determine his ultimate destination.

The family returned to England when H.T. was very young. He attended British schools, then earned his bachelor’s degree in English at Oxford University. There, he was an assistant in the offices of The Oxford English Dictionary, an association that steered him toward the lifelong study of words.

Price found a job teaching English at the University of Bonn in Germany, where he also earned his doctorate (and taught one of Kaiser Wilhelm’s sons). Unable to find an academic post in Great Britain, he became a naturalized German citizen, receiving assurances that if war broke out, he would not be forced to fight his countrymen.

After a quick return to England and Oxford for a master’s degree in 1911 — also the year he married — Price was back in Bonn, where he taught until the outbreak of World War I in 1914.

Against his protests, Price was drafted as an infantry private in 1915 and dispatched to the Russian front with only the barest training. That summer, he was captured by Russians and packed off on a six-month trek on foot, by wagon, and finally by train to a prison camp in distant Siberia. He was almost certainly the only English lexicographer in Russian custody. 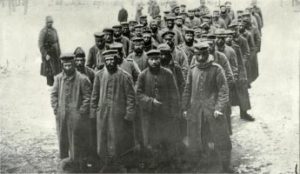 Price was among the German POWs who faced harsh conditions in Siberia. (Image: International Encyclopedia of the First World War.)

As prisoners, Price wrote in his post-war memoir, Boche and Bolshevik, “We had to undergo horrors which even now it appalls me to remember.” But his Russian guards were mostly “careless, happy-go-lucky fellows” who did more harm to prisoners-of-war through inefficiency and corruption than by deliberate cruelty.

On the journey east, as winter set in, Price was stuck by snow-blindness. The cold was astonishing. He took off his clothes three and four times a day to inspect them for lice and never picked off fewer than a hundred.

But there were moments of beauty, too. “Sometimes,” he wrote, “on approaching the great towns we felt the charm and mystery of ‘Holy Russia’ of story, when we saw the gilded crosses and domes of the cathedrals flashing splendidly in the sun and heard the deep melodious tolling of the bells.”

At one point, Price received a copy of St. John’s gospel, the first reading material he’d seen in months. “The very poverty of our circumstances allowed us to concentrate our minds upon it as we could never have done before. The impression made was not altogether a religious one … But its poetry and fire worked upon us in such a way that, although I may forget everything else that came to me that year, I shall not forget the hours spent in reading St. John.” 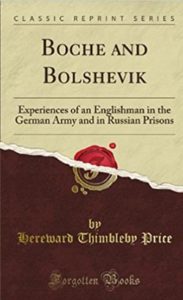 Organization in the Siberian camps soon broke down under the sheer weight of overpopulation. Food was scarce and inedible under any other circumstance. “Twenty pairs of verminous, soot-black hands might have touched your meat before it got to you,” Price wrote. One week there was nothing to eat but moldy bread crumbs.

Soon a murderous outbreak of flea-borne typhus invaded the camp. Price lived with 400 others in a barracks built for 100, sleeping with his knees in the next man’s back, and he often awakened in the morning to find the man next to him dead. By day the living hauled water and wood through frozen forests.

“The peculiar numbness of prison life … kept us from feeling our position too acutely,” he wrote. “But when everything was over, a strange horror of it all took possession of us, and we could not bear to look back.”

By a stroke of luck, some Hungarian officer-prisoners heard Price was a teacher of English. Tricking the Russians, they smuggled him to better quarters where he taught five classes a day. “The hard work was an undisguised blessing, it enabled me to forget where I was, and the days began to pass more quickly,” Price recounted. But the ruse only worked for so long.

Later his friends would ask how he endured the boredom of prison camp life. In fact, he said, “although I had never been hungrier, dirtier, in greater danger of my life, or in worse company,” it was also “a period full of fascination. The camp in time became like a great university.” With the mixture of nationalities in the camps, “merely to live with them was a political education.” 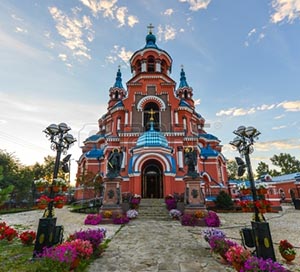 In 1917 the successive waves of the Russian Revolution threw the camp into turmoil. For Price, the upheaval led to his liberation, at least from camp life. The authorities sent the young scholar to Irkutsk, known for a time as the “Paris of Siberia.” He lived as a tutor with a wealthy Russian family.

There he saw the “wonderful burst of joy” that greeted the overthrow of the Czarist regime and the sudden end of war with Germany. But soon social order broke down and new horrors began – this time in the name of the Bolsheviks.

With the help of the British consul in Irkutsk, Price wangled diplomatic protection and passage to Russia’s Pacific port at Vladivostok, where he saw the British flag waving above a British vessel.

From there he wound up in China, where he taught English in an American YMCA, then at a missionary school while doubling by night as a sub-editor on the English-language Peking-Tientsin Times.

After the war, finally reunited with his family, Price made his way back to Germany, where he taught for several years at the University of Kiel. His work there included contributions to the Dictionary of Economic English, and this experience in lexicography led to his final career move.

In 1929 Price was appointed associate professor of English at Michigan. The post included responsibilities as an editor of the Early Modern English Dictionary, one of two significant lexicography projects that scholars were beginning to pursue in Ann Arbor.

He held those positions for many years, was promoted to full professor, and served for a time as the interim chief editor of the Middle English Dictionary, the massive work that outlived its Early Modern English sibling and became known as one of the world’s most complete and authoritative dictionaries.

In the dictionary offices at Angell Hall, Price cast a formidable presence, enforcing some of the stern hierarchy of prison life (or at least of British academic life). When he was in charge of the Middle English Dictionary, a colleague recalled, “instructors and graduate students, even assistant professors, were barely human.” Yet the same colleague “felt warmly toward Price.” For all his strictness, he earned respect and friendship all around.

At peace in Ann Arbor

In the hours away from academe, Price was a man of many enthusiasms, including golf, movies, and botany. Along with scholarly publications on lexicography and the works of Shakespeare, he wrote on the history of the theater and of shorthand writing.

In his lectures at U-M he never used notes. Students who took his courses admired Price so much that in the final semester before his retirement, the spring term of 1949, they took shorthand notes on all his lectures, then transcribed them for presentation to Price in a set of bound volumes.

Upon his retirement, the University appointed Price to the Williams Professorship. This signal honor, given to a few select faculty members, memorialized Michigan’s beloved first professor, George Palmer Williams. As Williams Professor, Price received all the income from the Williams endowment fund (also U-M’s first) every year for the rest of his life.

Because young Hereward T. Price became a scholar of words, we can’t pass up a note on Ambatolahinandrianisiahana, the name of his birthplace on the island of Madagascar.

Yes, it’s a mouthful. But at just 26 letters, it’s not even close to the world’s longest one-word geographical name.

According to the World Atlas, the bronze, silver, and gold medals go to:

To read more about the extraordinary making of U-M’s Middle English Dictionary, see “War Over Words” at the Heritage Project, a treasury of stories about the University’s past.