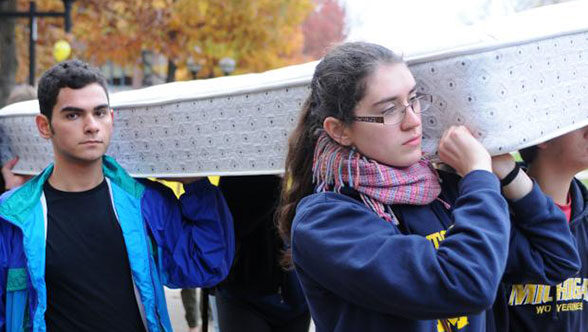 In his opening remarks at the February 2017 Board of Regents meeting, U-M President Mark Schlissel said the administration will engage an outside expert to review its policies and practices to be sure the University is doing all it can to prevent and respond to reports of sexual misconduct in all aspects of the community.

Schlissel acknowledged the University’s three-decade-long history of work in developing prevention and education programs focused on combating all forms of sexual misconduct. Yet, he said U-M was committed to doing more.

“Although we have longstanding and focused prevention efforts and education programs, we are absolutely committed to developing approaches that will serve our community even more effectively in the future,” the president said.

“We are examining our procedures to see where we can improve reporting, accountability, and support for those who come forward. This is a top institutional priority for all of us, including the Board [of Regents] and the executive team.”

He said recent efforts have focused on student sexual misconduct, including changes implemented earlier this month to the University’s Policy and Procedures on Student Sexual and Gender-Based Misconduct and Other Forms of Interpersonal Violence.

“Now we will seek a broader examination of our entire community,” Schlissel said. “This includes students, faculty, staff, visitors, and patients. We will ask an outside expert to assess the quality of our current efforts and suggest what we can be doing better, so that we can make any fixes that are necessary.”

The president acknowledged the leadership of the Regents, the University’s executive leadership team “and the many outstanding experts we have in our community” for focusing on this important issue.

“We care very deeply about this issue, and we share a commitment to look each other in the eye and say that we simply won’t tolerate these types of behaviors at the University of Michigan,” he said.

“I would urge that nothing be off the table when it comes to protecting the health and safety of our community and the people who interact with it.” — Regent Andrew C. Richner
“I just want to echo your remarks and comment on the bravery of the women that reported,” said Regent Denise Ilitch. “We’re going to do everything we can to have a safe environment at Michigan and there’s going to be a lot more to come and a lot more discussion but I really want to speak to the U-M community and just say report, report, and report.”

“We are committed to treating any allegation of sexual misconduct seriously and with transparency,” said Regent Andrea Fischer Newman. “And more than that, to always consider how we can do better to improve our University of Michigan community so every member of it is safe and respected.”

“I know the University is really focused and proactive in doing everything we can to tackle the problem of sexual misconduct, wherever it may exist,” said Regent Andrew C. Richner. “As we re-examine our policies, practices, and procedures, I would urge that nothing be off the table when it comes to protecting the health and safety of our community and the people who interact with it.”

In his remarks, the president said the “horrific problem of sexual misconduct has taken on renewed prominence in the national conscience” and he commended the “courageous efforts” of the young women who have shared heartbreaking accounts of their painful and deeply personal experiences.

New categories of allegations were covered under the University’s policy for the first time in 2017, including intimate partner violence, gender-based harassment, and violation of interim measures.
“As many of you know, we’ve experienced our own instances of sexual misconduct on our campus, including one involving a Michigan Medicine physician who was charged with receipt and possession of child pornography. We took swift action in December when notified that the state was investigating this same doctor for alleged sexual misconduct involving an adult patient.

“We immediately removed him from patient care duties and reported him to the police. He is no longer employed at U-M. We await the outcome of law enforcement investigations and continue to cooperate fully,” Schlissel said.

In that case, the president said, the University has retained an experienced national firm with health care expertise to investigate the matter. “We want to understand how this disturbing situation occurred so that we can best work to prevent such things in the future. We will share findings when the investigation is complete.

“This occurrence on our own campus, as well as other episodes of sexual misconduct across the country, compel us to remain vigilant while always looking for ways to make this a safer and more supportive university,” Schlissel said.

U-M has been a national leader in education and prevention efforts related to student sexual misconduct. The Sexual Assault Prevention and Awareness Center was established more than 30 years ago on the Ann Arbor campus and provides confidential services to the entire U-M community.

The Office for Institutional Equity handles all sexual misconduct investigations regarding reported violations of University policies.

“We are committed to treating any allegation of sexual misconduct seriously and with transparency.” — Regent Andrea Fischer Newman
In 2015, the University participated in two campus climate surveys of students to gain an understanding of their experiences and perceptions regarding sexual misconduct on campus.

In that same year, the U-M Police Department established a special victims unit to focus on responding to and reducing the incidence of sexual assault and related crimes on the Ann Arbor campus. The officers in this unit have received special training in how to thoroughly and sensitively investigate allegations of sexual assault.

The University also shares publicly an annual report on its Policy and Procedures on Student Sexual and Gender-Based Misconduct and Other Forms of Interpersonal Violence. Reports and investigations of prohibited student conduct at U-M increased in fiscal year 2017 following increased efforts to enhance awareness of these issues and how to report concerns.

New categories of allegations also were covered under the University’s policy for the first time last year. These new categories include intimate partner violence, gender-based harassment, and violation of interim measures. Collectively, these allegations account for 15 percent of the 218 reports received last year, according to the annual report.

This story is reprinted courtesy of The University Record.