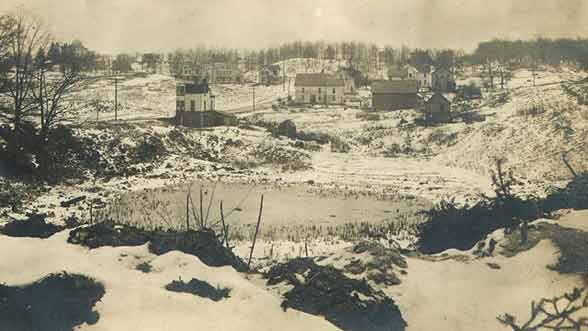 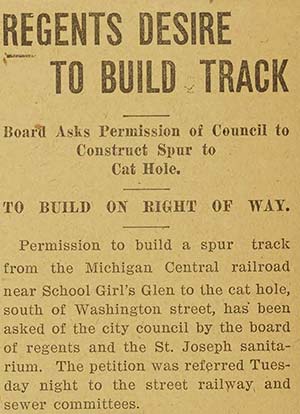 The term appeared not long after the campus got started, and clearly took hold in the community as this 1913 Michigan Daily article demonstrates. (Image: U-M’s Bentley Historical Library.)

Whenever you drive up Washtenaw Avenue toward the sharp bend into Huron Street, you’re passing the site of a long-lost Ann Arbor landmark, known to generations of Michigan students and staff as the Cat Hole.

Once upon a time, it was nothing but a swampy pond at the soggy bottom of a snake-infested ravine.

But this undistinguished chunk of geography figured in the development of the campus and more than a few student shenanigans for many decades.

Deciding on the Diag

In 1837, when the University’s first regents were choosing a site for the campus, they looked at two farm properties of roughly 40 acres each.

A few blocks up State Street to the north, on a parcel owned by Andrew Nowland, they looked out over the Huron River — a lovely view.

But then they looked east and saw a marshy pond and a brush-crammed ravine sloping down to the river. That would block any expansion eastward from Nowland’s pleasant heights.

So the Rumsey farm became the site of the Diag. (See “A Different Diag.”) The regents left the reedy pond to the snakes and the students, who would soon make imaginative use of it.

Exactly when and why people began to call it the “Cat Hole” isn’t known for sure. In local newspapers the term appeared not long after the campus got started, referring both to the pond itself and to the broad depression where the pond waxed and waned, depending on rainfall.

In some years the waterhole was all but dry. But in a rainy spring after a winter of heavy snow, it could be eight or 10 feet deep and 500 feet across. (Math professors would send students outside with a problem: Estimate the volume of water standing in the pond that day.)

“Though this unsightly bog hole has been gradually filled in,” wrote Wilfred Shaw, head of the Alumni Association, in 1916, “it still forms a blot on the landscape.”
Legend-spinners of later times said the Cat Hole got its name from the stealthy practice of medical students who needed a place to dump the remains of the cats they dissected for anatomical study. Since roughly World War II, campers and hikers have applied the term to the makeshift latrines they dig on a long walk in the woods.

But the best explanation, by one word sleuth’s account, is hyper-local.

It seems the early settlers of southern Michigan — a place of many low-lying wetlands before the bulldozers arrived, and the home of most early U-M students — used the term “cat hole” for any shallow depression where water collected from rain, snow-melt and nearby water-courses, often with cat-tails growing along their edges. That described this spot to a T.

“Away to the Cat Hole”

In winter, students flocked to the Cat Hole for sledding and skating. But it became popular chiefly as a place for people to throw things.

In the University’s early years, it often attracted human bodies — living ones, that is. During rowdy “rushes,” when sophomores and freshmen faced off, one side or the other, seizing captors, would cry: “Away with them to the Cat Hole!” (See “The Great Rush.”)

When the clanging bell that called students to class in the 1850s disappeared, it was assumed to be at the bottom of the pond. When the Class of 1870’s gift to the University — a statue of Benjamin Franklin — went missing, there was a widespread view that it, too, could be found beneath the calm surface of the Cat Hole. (Apparently no one dove down to find out for sure.)

Another tale handed down through the years told of a crowd of student rowdies who conspired to steal a new boiler out of the old Engineering Building, then haul it aboard a stolen wagon to the Cat Hole, where it, too, came to rest at the bottom of the pond. 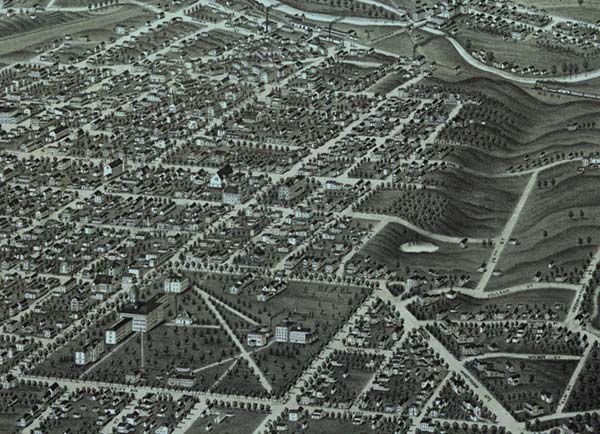 In this 1880 panoramic map of Ann Arbor, the Cat Hole pond appears at center-right. The marshy ravine that sloped from the pond to the Huron River impeded the campus’s growth to the east. (Image: Library of Congress.)

Into the Hole went tons of ashes from coal-burning stoves; cast-off materials from construction sites; trash from campus buildings and the city’s student-crammed boarding houses. When the original dome of University Hall (the predecessor of Angell Hall) had to be replaced in 1896, the slate and tin from the old dome was hauled over to the Cat Hole and pitched in.

The trash attracted all manner of uninvited guests. In 1913, for example, an enterprising zoology student named Harold Cummins turned over some rotting old boards in the Hole to discover several specimens of Arion circumscriptus,an invasive species of snail that was well known as a destroyer of suburban gardens. Cummins handed them over to his professor for cataloguing.

The University had bought the property in 1899, and by 1914, the dump had gotten so unsightly that a high fence had to be built around it. From now on, officials said, only University trash was good enough for the Cat Hole.

As the campus pushed past its early boundaries in all directions, the need for energy multiplied. By 1910, it was obvious that a new power plant was needed. So, finally, nearly a century after those first regents turned up their noses at it, the Cat Hole attracted a major construction project. For a power plant, the site offered a big advantage: it was close to the Michigan Central Railroad, from which coal could be hauled up a short spur to the campus. By 1914, the smoke stack of the Washington Street Heating Plant loomed over the Cat Hole at its western edge.

What tales have you heard about the Cat Hole? Tell us in the comments section below.
Year by year, campus construction crept closer — North Hall in 1900, home to the Homeopathic Hospital; the original Dental School in 1908; a big storehouse for the Building and Grounds Department in 1912. Trucks brought more and more excavated earth to the Cat Hole.

What had been a deep natural bowl with steep slopes was becoming shallower and shallower.

For several years around World War I, there were high hopes that an outdoor amphitheater to seat 10,000 people might be built on the last of the Cat Hole’s slopes, with substrata of refuse covered over by broad tiers of turf.

“Though this unsightly bog hole has been gradually filled in,” wrote Wilfred Shaw, head of the Alumni Association, in 1916, “it still forms a blot on the landscape which might, nevertheless, with a little effort and comparatively small expense, be transformed into a charming open air theater.”

But those plans were set aside during the war years and never resurrected. In the 1920s and ’30s, more facilities rose on the slopes overlooking the old bowl and right on top of it — among others, the Hill dorms, Palmer Field, the Ruthven Museums. They would be joined eventually by the Power Center for the Performing Arts, the modern Dental School, the Life Sciences Institute, the Undergraduate Science Building, and others.

Yet traces of the Cat Hole remained. Whenever a new building was started in this sector, engineers had to push their pilings deeper than usual to get below the soft earthen stew of ashes and trash dumped in the Cat Hole decades earlier.

Even today, snowmelt and rainwater still run down the gentle, human-altered slopes on either side of Washtenaw, heading toward the lower stories of the parking structure behind the Power Center, right where the Cat Hole collected run-off long ago.


Sources include Frederick Mayer, A Setting For Excellence: The Story of the Planning and Development of the Ann Arbor Campus of the University of Michigan (2015); Proceedings of the Board of Regents (November 1910); Bryant Walker, “Foreign Land Snails in Michigan,” Occasional Papers of the Museum of Geology (November 1918); “Proposed Transformation of the Cat-Hole,” Michigan Alumnus (May 1919); and The Michigan Daily. The etymological origin of “cat hole” is from Forrest Richardson, “On Course: A Dictionary of Words and Terms Used by Golf Course Architects” (Forrest Richardson & Associates).