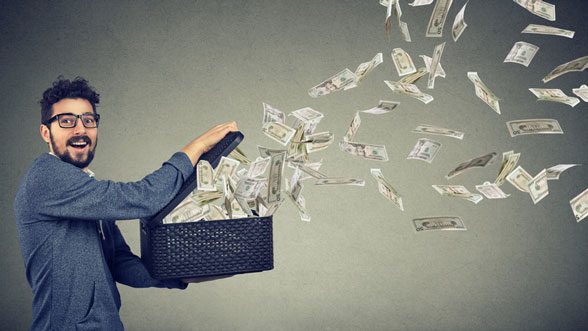 Want to boost the consumption rate in the United States? Transfer wealth from the top 20 percent of earners to the bottom 80 percent, according to a University of Michigan study.

The study is the first to consider the interplay between consumption, income inequality and wealth inequality, and found that such a transfer could boost the total consumption rate by about 3 or 4 percent.

Previously, studies had considered the effect of income on consumption, which is the measure of the goods and services you buy daily, including what you pay for your car or bus pass, groceries, clothing, and health care. But it’s important to also take into account wealth, which comprises the savings and other assets a person might own and resources that person might draw on if he or she falls upon hard times.

“In economics, there’s this theory that people tend to smooth their consumption,” says U-M researcher and study author David Johnson. “Even if your income goes up or down, you’re going to spend at a certain rate, saving for a rainy day, and if that rainy day comes, use those funds. The goal of our paper is to simulate how you respond to your income going up or going down.”

Shop till you drop

“Even if your income goes up or down, you’re going to spend at a certain rate, saving for a rainy day, and if that rainy day comes, use those funds. The goal of our paper is to simulate how you respond to your income going up or going down.”
What Johnson and colleagues found is that less wealthy people had a higher marginal propensity to consume, while wealthier people had a lower consumption rate.

Wealthier people spent more money as a whole but had a lower rate of consumption: everyday requirements such as groceries take up a smaller percentage of their budgets. Also, they have deeper pockets to dip into if they have an unexpected bill to pay, which made them less reactive to changes in their income.

Less wealthy people had higher consumption rates, and they were less able to keep a stable consumption rate if their incomes changed, according to the researchers. Hurdles such as a broken-down car or health emergency aren’t as easy to pay because they don’t have the funds in savings, or have more difficulty applying for credits or loans to pay for the emergency.

Examining only the effect of income on consumption doesn’t take into account, for example, a retiree whose income might be low, but who might be drawing on retirement savings.

The study uses data from the Panel Study of Income Dynamics, which has traced the financial lives of the same families for 50 years. The PSID is housed within the Survey Research Center at the U-M Institute for Social Research.

“In order to really evaluate the rate of consumption, you have to look at income, consumption, and wealth together,” says Johnson, who is the director of the PSID. “The Panel Study of Income Dynamics is the only dataset that has all three.”

The researchers also calculated what would happen if some wealth was shifted from the top 20 percent of wealthy people to the bottom 80 percent. They found that total consumption would increase by 3-4 percent.

“A redistribution of wealth might lead to higher growth, and growth is good,” Johnson says. “You’re still taking away from somebody, but overall, it’s better.”

The study is published as a working paper online at The Washington Center for Equitable Growth.