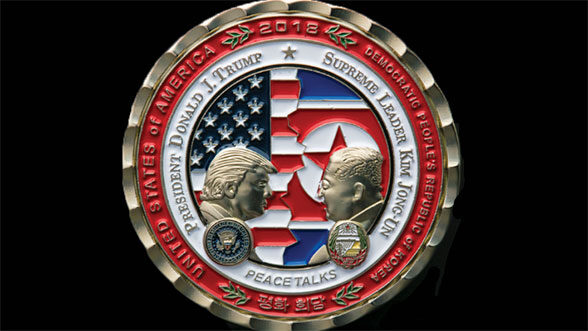 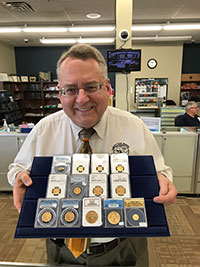 The June 12, 2018, summit between U.S. President Donald Trump and North Korean leader Kim Jong-un in Singapore was historic. But don’t fret if you missed the chance to spend $59 on the sold-out commemorative coin at the White House Gift Shop©, says numismatist Patrick Heller.

“First, it’s not a coin, it’s a medal,” says Heller, BBA ’74, longtime owner of Liberty Coin Service, Michigan’s largest rare coins and precious metals dealership. He predicts the medal will fetch between $1-$10 some day. “I’m a little amused by it, but it’s kind of sad for the people who buy those items,” he says.

Heller knows his business, domestic and foreign. He started collecting coins in 1964. That was the year after President John F. Kennedy’s assassination when the U.S. Mint began to circulate a silver half-dollar bearing JFK’s likeness. The following year, the U.S. Mint stopped producing 90-percent silver coins. The combination of those two events sparked a frenzy of collecting, Heller says.

“My whole family did it,” he says. “Seemed like everybody in the world wanted to collect coins then.” 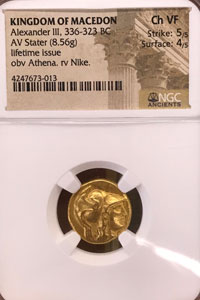 This Macedonian Kingdom gold coin dates to 336-323 B.C. in the time of Alexander III. Liberty Coin Service recently sold it for about $2,800. (Image: Alan Adler.)

Heller doesn’t contest the suggestion he has forgotten more about coins than many people will ever know. Since 1994, he has owned Lansing-based Liberty Coin Service, and he is among the 400 members of the prestigious Professional Numismatists Guild. Members must have “numismatic interests” of at least $250,000, a tie to coin dealing, and a spotless reputation in the business.

Throughout his career, Heller has made lasting contributions to numismatics, defined as the study or collection of currency (including coins, tokens, paper money, and related objects). His four-year analysis in the 1990s persuaded the State of Michigan it would generate a more significant profit if it eliminated the sales tax on rare coins and precious metals. He demonstrated how higher sales of tax-free coins and metals would lead to more taxable sales of coin supplies, antiques, and other merchandise. That, in turn, would lead to more jobs and payroll taxes, he argued. Eleven other states followed Michigan’s lead, based on Heller’s analysis.

Heller also was the primary author of the written instructions for the five potential designs sent to Mint engravers to create master dies for the 2004 Michigan Statehood Quarter. (He was one of four people present when then-Gov. Jennifer Granholm selected the design that appears on the Michigan coin.) Meanwhile, Heller’s byline is familiar to fellow coin experts and hobbyists. Since 1995, he has produced “Liberty’s Outlook,” a weekly newsletter targeted to coin dealers, and he’s written a weekly column in Numismatic News since 2007. 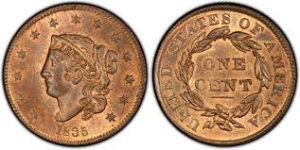 Becoming a coin dealer had always been a dream in high school, “but you couldn’t go to college to learn that,” Heller says. So, after business school, he took a job at a Southfield CPA firm and was content to be “just a plain old coin collector” on the side.

“And then in 1971, President Nixon closed the gold exchange window,” he says. “That’s where central banks had previously been able to turn in dollars to the U.S. government and get gold for $35 an ounce. In my mind, it indicated that the price of gold should rise substantially in the future.”

That’s just what happened. When President Nixon erased the remains of the gold standard that President Franklin Roosevelt started pulling away from in 1933, gold began to rise in value. Heller sold a car in 1976 and bought his first U.S. gold coins. 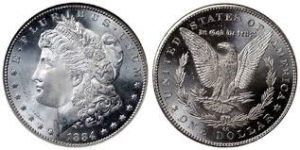 He’d already been bulking up on silver coins while a student in the early ’70s. Then, during a visit to see his girlfriend in East Lansing, he befriended Liberty Coin Services’ original owner, Bill Bradford, whose store was located near the edge of the Michigan State campus. (The inclusion of “Service” in its name makes the operation unique. Twenty unrelated shops in other states use the name Liberty Coins.)

By 1981, Liberty’s Bradford had made a fortune on gold bullion and wanted to retire. He asked Heller to buy his store, but Heller demurred. Eventually, he became part owner of the store, and in 1994, he took over completely, merging his business acumen with his love of coins.

“It wasn’t my plan,” Heller says. “It just happened to work out.”

In 2013, Heller moved Liberty from the basement of an old bank building into an outdoor shopping center on the border of East Lansing and Lansing. In 2014, he decided to sell the store to one of his employees. He will complete the sale next year. 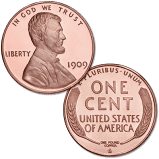 20th-century Lincoln pennies (1909-present) are a favorite item among collectors.

Notably, it was University of Michigan medical professor George F. Heath who founded the American Numismatic Association (ANA) in 1891.

The association has tried for more than a century to interest young people in collecting, even establishing its Young Numismatists program. ANA curator and museum director Douglas Mudd says many of today’s top dealers and coin graders came through its ranks.

But the hobby is on the wane. The U.S. Mint saw numismatic sales producing 44.3 percent less income in 2017 vs. 2016. The Statehood Quarters program that started in 1999 at one time had an estimated 100 million collectors, according to the Mint. But those gains have since reversed. Gold-colored dollars depicting U.S. presidents and quarters featuring national parks have generated even less enthusiasm. Only the pricier, specially struck “proof coins” and sets contain gold or silver today.

Investors still pay premiums for rare coins and gold and silver bullion, Heller says. And rarities that change hands every few years often sell for millions more than what they last commanded. But no one knows how many “casual” collectors are out there today. 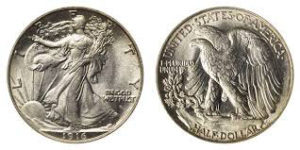 Two of Heller’s three personal favorites are foreign coins. Both are rich with personal meaning.

The City of Hall in Germany issued silver Hand Heller coins from 1189 to roughly 1500 AD. They feature the right hand of God on one side and a star ornament on the other. The Heller namesake was a major trading coin in its time.

A 1965 Liberia $12 Gold Commemorative coin honoring the 70th birthday of the country’s president is special. Heller attended his birthday party while his father was a foreign aid worker in the African nation.

Heller’s third prize is a Bank of Lapeer (Michigan) $3 banknote from around 1840. It is one of two known to exist. Heller graduated from Lapeer High School.

The collector also has held two famously rare coins. One was a 1787 Ephraim Brasher gold doubloon created under federal authority five years before the 1792 founding of the U.S. Mint. The doubloon fetched $7.4 million in 2011. The other was an 1804 bust silver dollar, which the Mint did not strike until about 30 years after the date. It was made under President Andrew Jackson’s authority in 1834 or 1835 as a diplomatic gift. One sold for $3.8 million in 2013.

After 55 years of collecting, there is no Holy Grail of coins for Heller. “I appreciate a lot of coins for their historical significance and beauty, but I don’t feel I have to own them.” 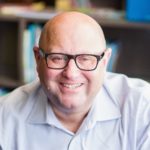 ALAN ADLER is a news, feature, and technical writer for a variety of outlets following a 20-year career in domestic and international communications at General Motors. He is a former reporter and editor at the Associated Press and the Detroit Free Press. Alan writes about technology, autonomous and electrified vehicles, transportation, sports, and real estate development, among other things.
Social
Share on: Share on Twitter Share on Facebook