The president’s back yard 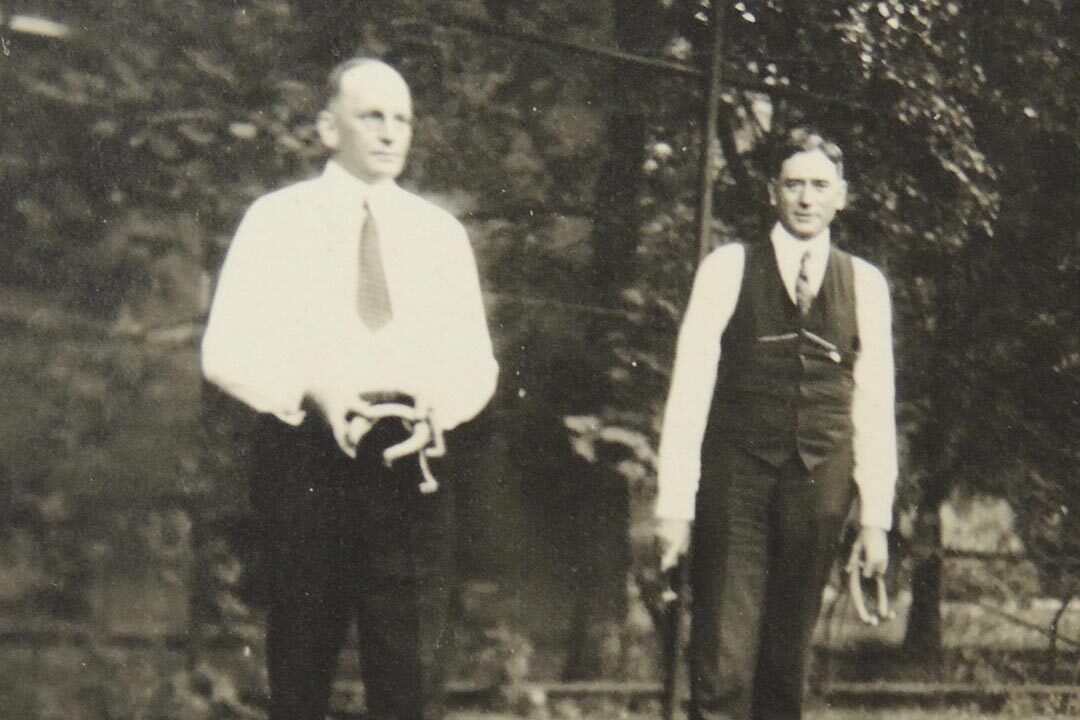 The other day I took a slow stroll through the yard of the President’s House on South University, front and back, looking closely at a spot I’ve passed so many times I hardly see it anymore.

I was trying to look with a sort of historical second sight, seeing not just what’s there now but what used to be there.

I had asked Jane Immonen to show me around. She’s the University’s forestry specialist. Pick practically any tree on the Diag, and she can tell you something about its story.

The President’s House — or the PresRes, in Building and Grounds lingo — was one of four more or less identical structures built in 1840 for U-M’s first professors. There were two on South U, two on North U.

When Henry Philip Tappan was appointed the first president in 1852, he and his family moved into the house at 815 South U, and it has been the President’s House since then — except during the later years of James Angell’s long run in the office (1871-1909), when some people called it the Angell House. (Angell lived there even in retirement, while his successor, the former Law School dean Harry Burns Hutchins, stayed put in his big house on Monroe Street — near the future site of South Quad.)

The other three professors’ houses gave way to the unrelenting need for more classrooms, more offices, and more everything as the University grew and grew.

The house at the center of the property has grown, too. Erastus Haven, Tappan’s successor, added a kitchen in 1864. The Angells added a wing on the west side in 1891. Marion Burton added a garage, sun parlor, and other space in 1920. Alexander Ruthven added a study in 1933. In the ’50s, Harlan Hatcher added a glassed-in porch and a stone terrace.

Changes in the yard are harder to track.

The yard we see now, in 2018, is spare and modest. There’s no big show to see, no elaborate gardens or fountains, not even a fancy fence. Susan Gott, the campus planner, told me that’s very deliberate. It’s the home of the president of a determinedly public university. It shouldn’t look like a private country club.

In the front, Jane Immonen pointed to the two dominant trees. They’re tall, but they’re youngsters. On the left is a shady zelkova, an Asian cousin of the American elm. On the right is a Kentucky coffeetree, a native North American from Michigan to the South, named for the seeds that pioneers used to grind up to make a truly terrible substitute for coffee.

Jane pointed out why such young trees — just 30 years old — stand on the front stage of this old, old yard. It’s because of the campus’ one great natural cataclysm, the Dutch Elm disease that slowly denuded the Diag’s 40 acres and much of the Midwest from the 1950s to the ’70s. Ever since that plague, Jane and her colleagues have been rebuilding the Diag’s green canopy. 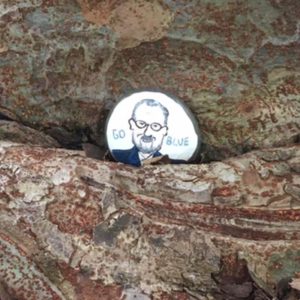 In the roots of the zelkova tree in the president’s driveway, someone has left a
painted rock as an homage to the current resident, President Mark Schlissel. (Image: James Tobin.)

We walked up the sidewalk along the yard’s eastern border. Just on the other side of the walk, the gnarly branches of an old burr oak point at the President’s House.

“This tree’s been here since they brought in the first load of bricks,” Jane said.

She pointed to a curving line of five or six white firs that shelter the east side of the house. They’re native to Michigan but they were “recruited” to grow here, maybe to soften the house’s sharp angles.

Then Jane pivoted and pointed to another white fir down at the southeast corner. It’s what foresters call a volunteer, a natural-born cousin of the firs by the house that sprang up from a cone that somehow migrated across the front lawn. The foresters let it grow up.

We swung around to the driveway, passed another zelkova in a little traffic island, and walked through a gate into the back yard.

In the mid-1800s you could stand there and look right, left, and center across an all-but-unbroken plain all the way to North U. This was the land of the old Rumsey farm, which the first regents chose as the place to plant a campus in the 1830s. 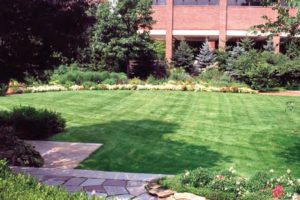 In the late 1990s, President James Duderstadt and his wife, Anne, oversaw a
graceful re-landscaping of the back yard.

For years there were no fences or buildings to impede that open view. The General Library rose up in the 1880s, but there was still a lot of open space back there. Photos from around the turn of the 20th century show there was room for lawn tennis courts and maybe a makeshift skating rink. A couple of professors planted a botanical garden, too. President Burton used to pitch horseshoes here (as shown in the photo above).

Now that view is entirely blocked. In the foreground is a curving curtain of trees — mostly spruces and hemlocks, Jane tells me. They were planted in an effort, not very successful, to shield the house from the towering edifice beyond the trees — the eight-story addition to the Graduate Library, built just after the presidency of Harlan Hatcher, from whom the library took its modern name.

From all those study carrels on high, a lot of eyeballs can stare down into the back yard. So the presidents’ families have used the space somewhat sparingly.

One of Harold and Vivian Shapiro’s four daughters threw a little party back there when she was a student in the Medical School and the ’rents were out of town. The Ann Arbor police dropped by to ask her to keep the noise down. (Come to think of it, who would have complained about noise on that block? Martha Cookies?)

The back beds along the yard’s borders were planted with flowers in the era of President James Duderstadt and his wife, Anne, who wrote a history of the president’s house. But tightening belts have trimmed the budget for annual plantings. Now the beds are blanketed in pine needles, as if in a native forest.

Moving toward the dark northwest corner of the property, Jane pointed to two towering white pines, the state tree. 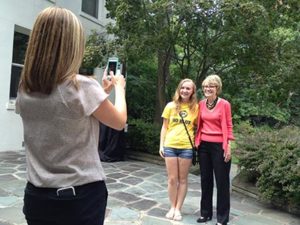 Then we came to the best tree.

You have to look at it to really notice it, since it’s in the corner of the yard, hard up against Tappan Hall, the University’s oldest extant classroom building, now home to the Department of the History of Art.

It was a black oak, Jane said. She looked up into the majestic branches high overhead. She estimated the diameter of the trunk at 50 to 60 inches, the height at 80 feet.

The tree was probably dropping acorns a century before the founders of Ann Arbor first surveyed this patch of ground in the early 1820s, she said.

Around the base of the tree, I saw patchy clusters of vegetation on the ground. They looked like gray-brown cauliflower — pretty, in a way, but what were they?

Jane sighed. Bad news, she said. They were the fruiting body of a fungus that is eating the ancient roots down below the surface.

Nothing to do about it — just the natural end of a great plant. It would come down in time, and the University’s foresters would see it replaced with something new to grow tall in the house’s third century.

(Images in the slideshow were sourced from U-M’s Bentley Historical Library.)