Elvis at the end 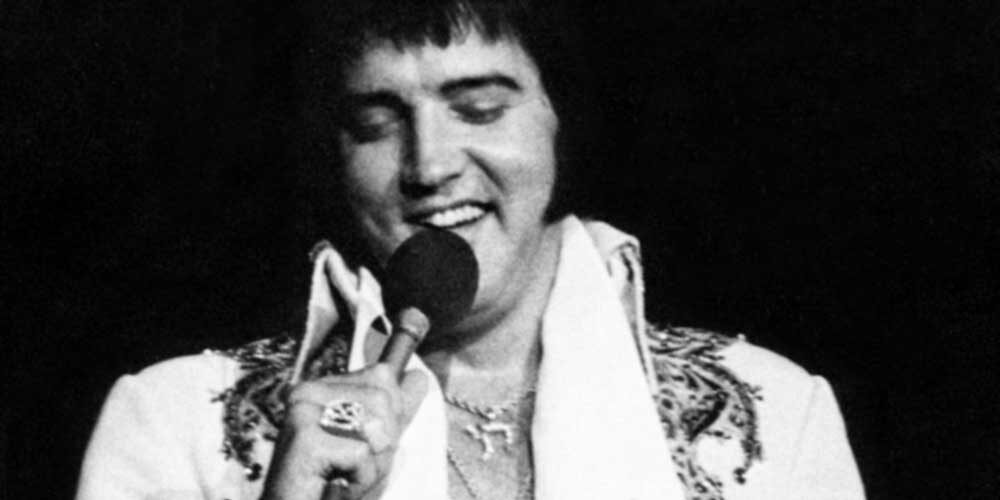 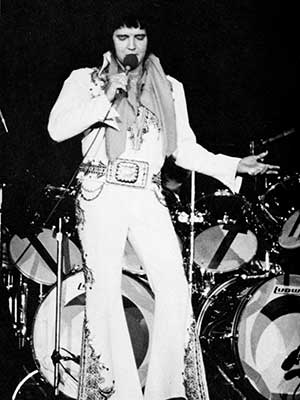 Doug Edwards was a stagehand at Crisler Arena that night. It was Sunday, April 24, 1977.

The warm-up acts had started at 8:30 p.m. — Marty Horrell and the Hilton Hot Horns, a comedian named Jack Kahane, and a gospel group, J.D. Sumner and the Stamps Quartet. It was about 10 now and the intermission was over. Fourteen thousand people buzzed in readiness for the real show to start.

Edwards and the other hands were getting the piano and the amplifiers in place when they saw a white stretch limousine glide through the big tunnel at the north end of the arena and pull to a stop backstage.

Three men hustled out of the car — a couple of assistants and a familiar figure in a white jumpsuit open from neck to waist. He was wearing glasses.

The houselights went down. The sound system went up. The theme from “2001: A Space Odyssey” blared at top volume.

The man in the jumpsuit walked past Doug Edwards at a distance of no more than five feet. He was bigger than Edwards expected.

“I didn’t really have anything to say to him,” Edwards says. “I mean, what are you gonna say to Elvis?” 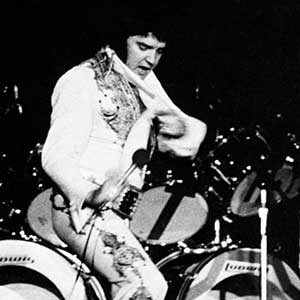 At 42, Elvis seemed trapped in a tragic downward spiral. The tabloids traded in outrageous alarms and diversions. He was said to be dying; he was abusing drugs; he was engaged to a 20-year-old former “Miss Traffic Safety”;  he was overweight; he was breaking commitments; he was at war with his manager, the infamous “Colonel” Tom Parker.

None of that bothered true believers.

Elvis’ talent transcended all that nonsense for fans like Jack Harbaugh, one of Bo Schembechler’s assistant football coaches at the time. He had tickets in the upper deck that night, on a date with his wife, Jackie.

The Harbaughs were in their 30s. Their kids — John, Jim, and Joanie — were just teenagers then.

Jack and Jackie had fallen hard for the original Elvis when they were teenagers themselves. They were there at the beginning, drawn to the weirdly charismatic country boy who’d come up from Memphis to inject black rock ‘n’ roll into the white American mainstream. They’d seen (in real time) his third appearance on “The Ed Sullivan Show,” the one where the cameras were trained strictly above the performer’s waist. Apparently, Elvis’ hips, and what he did with them, were not ready for prime time.

Now, as the King went to work at Crisler, opening with “See See Rider” and “I Got a Woman,” the Harbaughs spotted their friend Anne Hanlon down on the floor in a seat near the stage. She was the wife of Jerry Hanlon, another of Bo’s assistant coaches.

The Harbaughs knew Anne as a totally put-together young matron, charming and decorous, the epitome of class. But the woman they saw down there now was a creature they hardly recognized.

She was jumping. She was yelling. Pretty soon she was charging the stage with a scarf in her hand, getting ready to throw it.

At his concerts in the ’70s, Elvis had taken to tossing silk scarves into the crowd one by one. Ecstatic fans would throw him their own scarves in hopes that he would catch one, wipe his brow, and toss it back. (Common as they were, Elvis scarves from back in the day still go for $800-$1,200 at auction, according to PBS’ “Antiques Roadshow.”)

Sure enough, Anne Hanlon’s scarf flew up on stage, and as Harbaugh remembers it, the scarf came back down to Anne, complete with Elvis’ DNA.

A bootleg recording, now on YouTube as “Elvis Presley at Cazzie’s House,” preserves one hour, seven minutes, and 39 seconds of what fans heard that night.

The Michigan Daily didn’t cover the show, but Michiganensian photographers documented the event. We’d love to hear from you if you were there!
He mumbled, maundered, tried to be funny: “I mean, my suit’s too tight.” He karate-kicked at the end of songs. His vocals ranged from deep bass to high falsetto.

“I don’t want to throw Elvis under the bus, but he was on a downhill slope,” Edwards says. “Elvis had died but they hadn’t buried him. He was dressed up and they put him out there and he got through the show.”

But to the Harbaughs, up high in the arena, it didn’t look that way and it definitely didn’t sound that way. If nothing else, the bootleg proves his voice still had power.

“As he got older his voice was better than when he was younger,” Harbaugh says. “It was just an outstanding performance — outstanding!

“He was just able to connect. It was charisma. It was a presence, an understanding of how to connect with an audience.”

By all accounts, Elvis shouted his way through “Can’t Help Falling in Love” and then it was over — fast.

The house lights went down. Edwards saw the glasses go back on. And Elvis hurried to the limo.

Then came the announcer: “Ladies and gentlemen, Elvis has left the building. Thank you and good night. We’d like to remind you that for a short time the Elvis Super-Souvenir Concession Stand will be open…”

“There were gonna be no encores,” Harbaugh remembers. “He was gone. It was over.”

That spring and summer Elvis Presley played 35 more concerts, from Duluth, Minn., to Mobile, Ala.

Four months after his one and only appearance in Ann Arbor, on Aug. 16, 1977, Elvis died at Graceland, his home in Memphis.