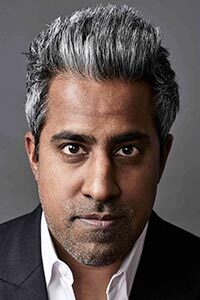 The New York University visiting scholar and NBC political analyst recently released Winners Take All: The Elite Charade of Changing the World (Knopf Doubleday Publishing Group, 2018). He takes on the world’s monied “philanthro-capitalists” and refutes “an idea that has become part of the air we breathe,” according to The Washington Post. Altruistic elites often do harm, Giridharadas says, even when they appear to be doing good.

“They’re causing by operational daylight the problems they seek to solve by philanthropic moonlight,” he says.

Giridharadas’ thesis likely made for spirited debate among any of the 3,000 economists, world leaders, policymakers, and CEOs who picked up his book en route to the economic confab in Switzerland. In Davos, Giridharadas says, the elite titans “fight on both sides of a war” as they discuss  Africa-saving, charity, and inequality. On Jan. 23 he tweeted that the nature of the economic forum “elevates them from mere businesspeople to sages. Then they use that loftier platform to stealth-lobby against policies that help others, but hurt them.”

In the following Q&A, Michigan Today contributor Tom Kertscher invites Giridharadas to elaborate on five excerpts from Winners Take All: The Elite Charade of Changing the World.

Excerpt: “The winners of our age must be challenged to do more good. But never, ever tell them to do less harm.’”

Michigan Today: You seem to believe that leaders/the wealthy may be doing more harm than good with their philanthropy, to the point of being predatory at times. What are some ways they are doing harm?

Giridharadas: The winners of our age, in many cases, make their money from business models that are inherently harm-doing. The Sackler family made a huge fortune selling opioids, which becomes the seed of the opioid crisis, the metastasizing phenomenon that, I think, has claimed some 200,000 lives. Then you have the banks that caused the financial crisis in 2008. And then at the subtlest level, but I think very importantly, many of the winners of our age are beneficiaries of, and complicit in, an economic order, a set of social arrangements, that is guaranteed to shut most Americans out of the so-called American dream.

Excerpt: “For when elites assume leadership of social change, they are able to reshape what social change is — above all, to present it as something that should never threaten winners.”

MT: What are some examples of elites appearing to move to make social change, only for things to remain as they are and for winners not to be threatened? 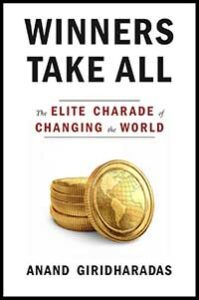 AG: David Rubenstein is one of the founders of the Carlyle Group, a private equity shop in Washington, D.C. He often buys historic documents and then (loans) them to the U.S. government — the 13th Amendment, the Magna Carta, those kind of things. And he says the government just doesn’t have the money it used to have, so people like him have to step up.

One of the things that Rubenstein doesn’t talk about is the fact that he is one of the reasons the government doesn’t have the money it used to have. He and his firm and the industry have lobbied for something called the carried-interest loophole, which is a tax benefit and a sweet deal for hedge-fund guys and private-equity people and those who make their money from investment income. And that loophole, by one estimate in The New York Times, costs the government $18 billion a year.

A lot of rich folks in our age are fighting on both sides of a war. They’re causing by operational daylight the problems they seek to solve by philanthropic moonlight. And they are building, maintaining, and clinging to a set of social arrangements that will predictably, reliably, and foreseeably cause massive exclusion.

Excerpt: “When the fruits of change have fallen on the United States in recent decades, the very fortunate have basketed almost all of them.”

MT: Is this a reference to inequality in wealth and income in America, or are the very fortunate getting a disproportionate share of other fruits of change?

“The University of Michigan was kind of this amazing, warm, decent place of learning. It’s this kind of gem of America where, basically, if you want to learn, it’s as good as any anyplace in the country. But it has a decency and a ‘normalness’ and it feels like a real place with real people in a way that a lot of elite American institutions do not.” —Anand Giridharadas

Amazing things have happened in the ability to teach students, but our kids are no better educated. Amazing things have happened in biomedical research, but our lifespan is down. The first set of things is innovation. The second set of things is progress, if progress is defined as most people’s lives getting better. And what I want to suggest is one of the consequences of inequality — but in some ways the meaning of inequality — is that you start to have a breakdown between the innovation and the progress. In a society that is so unequal as ours, innovation has stopped translating into progress.

Excerpt: “The top 10 percent of humanity has come to hold 90 percent of the planet’s wealth. It is no wonder that the American voting public — like other publics around the world — has turned more resentful and suspicious in recent years.”

MT: Are you arguing for a redistribution of wealth — and if so, how would you do it — or are you seeking some other type of change?

Dismantling capital supremacy is going to be complicated; there’s not an easy solution that’s immediate. I think it will involve the kinds of things like higher taxes on wealthy people, more regulation on a lot of businesses that essentially dump harm into our laps, whether that be Facebook or chemical companies or Exxon Mobil. I think it’s going to require ending the manifest cruelty of a public education system where public schools are funded according to the value of mommy or daddy’s home.

Excerpt: “Are we ready to call participatory democracy a failure, and to declare these other, private forms of change-making the new way forward?”

MT: Are you saying that “ordinary” people, rather than just the elite, should be more involved in making change — and, if so, what should ordinary people be doing?

AG: There is a long history of making extraordinary change in this country, real change, and that history is a history of movement from below demanding power. There’s that old (Frederick Douglass) quote about power concedes nothing. You have to take power; you have to demand power. If you think about how women got to vote, or how we ended slavery in this country; if you think about how we got children out of factories and how we had a New Deal and all of these things, they were the mobilization of citizens. It’s such a crucial part of making change happen because it is only through that kind of mobilization that you muster the power to counteract entrenched power.

That heritage has been lost in what I can call “the Age of Markets,” because the Age of Markets basically told young people that if you want to change the world, you should start a cupcake company that gives back, or join an impact investment fund, or go into consulting at McKinsey or investment banking at Goldman Sachs. In other words, change the world by getting smart about business. That rhetoric and that story has distracted young people from the real work of real change.