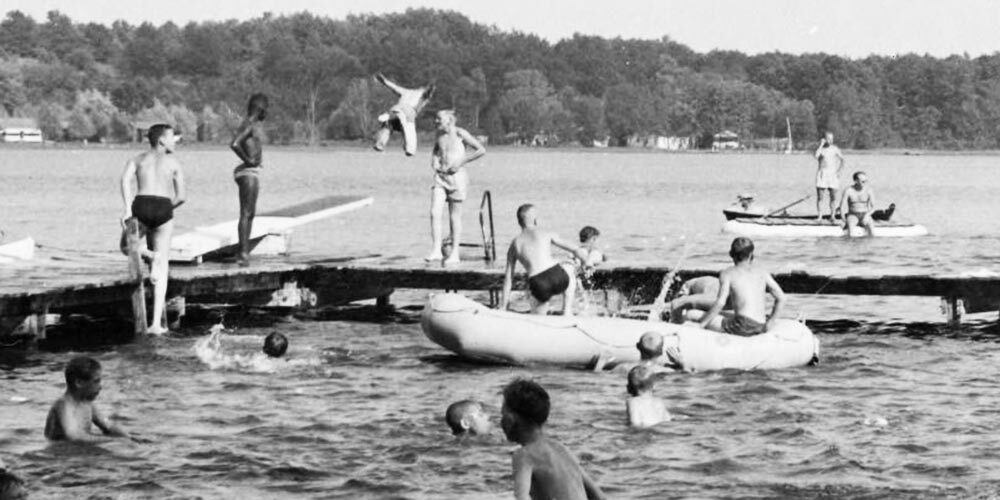 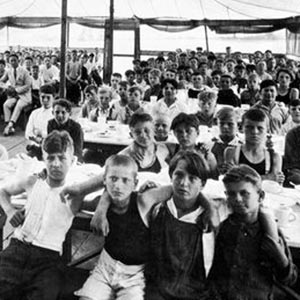 The idea occured to two idealistic young men in 1919.

Lewis Reimann, class of 1916, had been a football tackle under Coach Fielding Yost and Big Ten champion in heavyweight wrestling. Thomas Evans was general secretary of the Student Christian Association, then one of the most active organizations on the campus.

Both were proponents of a movement called “muscular Christianity.” They believed, as an admirer put it later, “that on the University campus there were virile men of Christian character who would gladly spend a large share of their summer vacation, not just for pay or for the outing, but to inspire, direct, and befriend boys whose lives were cramped.” Under such direction, the boys “would come to believe that there are men of ideals who care for them and want to make them good.”

With that, the University of Michigan Fresh Air Camp began.

After two years in temporary quarters, the camp put down roots on the shore of Patterson Lake ­— near Pinckney, twenty-some miles northwest of Ann Arbor. Private donors had contributed 170 acres, much of it unspoiled hardwood forest, as a permanent home.

From the beginning, the camp embraced an extraordinary dual purpose. On the one hand, it was a haven for kids with problems, with no restrictions as to race, creed, or national origin — though it was limited just to boys for many years.

On the other, it was a laboratory for researchers and students to determine how best to teach and help such kids. 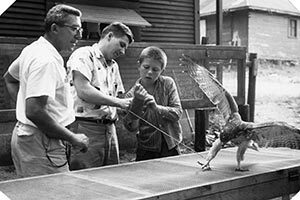 In the early years, the experts called them “troubled boys.” They were mostly white, a few black, all born to poor and working-class parents and living in “a condition of community, family, and personal disorganization [and] in conflict with and at cross-purposes with their parents.” Most were from Detroit, Ann Arbor, and Hamtramck. In later decades, researchers amended the description to “children at risk.”

The Fresh Air Camp, as expressed early on, had a clear mission: “to benefit boys of limited means and limited opportunities for outdoor life, and to afford a means of stimulating University men to an interest in intelligent leadership among boys.” They could “learn to feel the throb of nature, to learn games, stories, how to swim, fish and row a boat…”

Each summer through the 1920s and ’30s, 400-some boys spent periods of 10 days to four weeks at the camp. (Later the number was closer to 250 per summer.) Some came from foster homes. Most were selected by officers of the juvenile court, social-service organizations, and children’s aid societies.

Social workers and educators from U-M increasingly taught and supervised the camp counselors, many of them U-M students and recent graduates. In the late 1930s, the University began to offer summer-session courses to students working there. Staff members conferred with each boy’s sponsor before and after his time at the camp, coordinating plans for how best to help him. 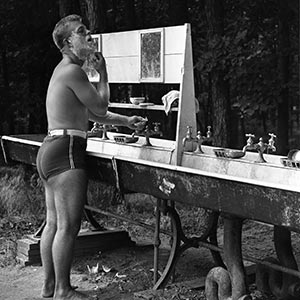 Camp in all its morning glory. (Image courtesy of the Ann Arbor District Library.)

Year by year, construction crews replaced tents with wooden lodges, cabins, and a clubhouse, even as the Great Depression tightened purse strings. By the end of World War II, the camp facilities comprised more than 25 buildings, including classrooms, a workshop, and an infirmary.

In the 1940s, another private donor added a hundred more acres to the site, and the private association that had held the property since the ’20s deeded the entire camp to the University. Generous private individuals continued to fund basic operations, while a board consisting mostly of interested U-M faculty oversaw the programs. From the 1940s to the ’60s, U-M’s Institute for Human Adjustment (later incorporated into the Mary A. Rackham Institute) oversaw camp operations.

The usual range of waterfront activities — swimming, diving, rowing, sailing, and life-saving lessons — consumed the daylight hours. At night, there were campfire programs, skits, and story-telling. Campers played softball and volleyball, boxed and wrestled, and jumped on trampolines. As they explored the forest, they learned about the state’s animals, insects, birds, and trees.

It wasn’t all fun and games, though. Some issues exceeded the counselors’ expertise, even with University-trained social workers and teachers on site. A history of the camp written in the mid-1950s described it this way:

“These boys present problematic behavior in a far higher incidence than would be true in the usual camp. Many times they are very difficult to manage. At all times they present a challenge to the insight and ingenuity of the adult.” Signs of “maladjustment, sometimes severe and deeply rooted,” were common.

Were you a counselor or a camper at the Fresh Air Camp? We’d love to hear your memories!
No one believed that 10 days at a summer camp would turn troubled kids entirely around. But there were successes. “No counselor leaves camp without having experienced the satisfaction of seeing a boy respond favorably to healthful treatment and express his need for real affection. Often the attachment of a boy for camp and for counselor does not end with the close of the season, but continues for years.”

Another history says: “One of the boys had run away from three different camps under stress of acute misunderstanding. He was called a problem boy, yet all that he needed was to be given some channel in which to express himself. He was given the task of cheerleader, and got on famously.”

“Delinquent boys were not delinquent in camp,” a director noted in 1937, “and … one gang of boys, all delinquents, showed marked improvement after the camp experience.” 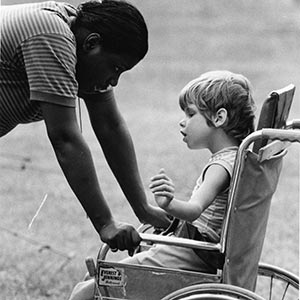 In the 1960s, the camp shifted its focus to children with disabilities. (Image: U-M’s Bentley Historical Library.)

In the 1960s, the School of Education assumed control of the camp and shifted its focus to serve children with mental disabilities. Then, in the late ’70s, funding faded and the camp closed. For 25 years U-M used the property to host meetings, retreats, research, and classes.

In 2005, the University decided to sell the old campground. But Doug Armstrong, a nurse and director of clinical research in University Hospital’s transplant program, stepped in with a rescue plan. (Read: Doug Armstrong’s labor of love.)

Armstrong had been one of several transplant staffers who ran week-long summer programs for young transplant recipients at various locations. Now he saw a chance to base the programs in one spot close to Ann Arbor. He negotiated a lease with the University and began to seek support from foundations. Partnerships were arranged with medical centers across Michigan and in Chicago.

In 2011, a new nonprofit camp opened under the name North Star Reach. Cost-free to campers, every year it offers the programs of a traditional summer camp to a thousand children with serious medical conditions — new life for the old fresh-air idea.