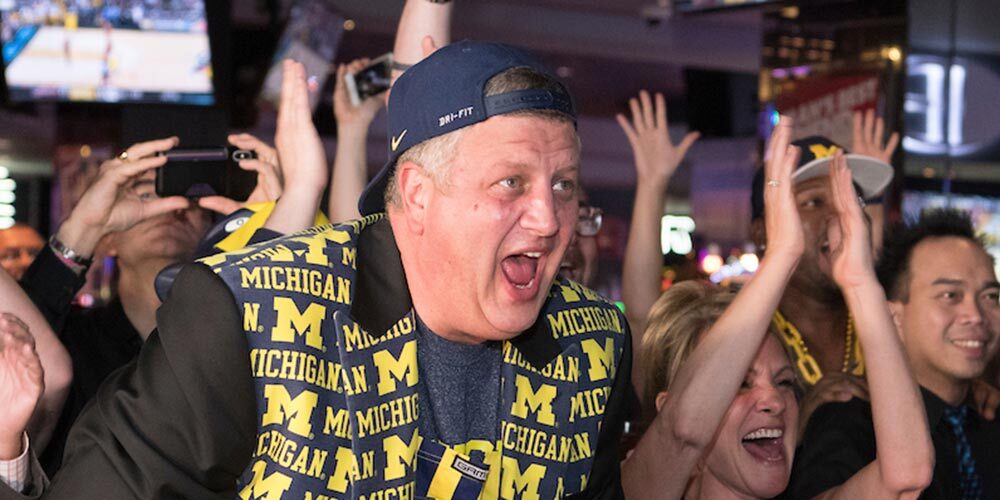 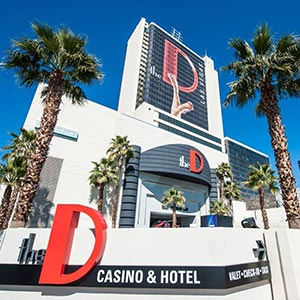 The D Las Vegas is located at the eastern end of the Fremont Street Experience on the site where the Irish-themed Fitzgerald’s once stood. (Image: thed.com.)

You might think the memorable tagline “What happens in Vegas, stays in Vegas” is just some catchy slogan cooked up to inspire tourism of a certain desert oasis. But Derek Stevens, BS ’90, knows better.

Listening to the owner of the D Las Vegas Casino & Hotel recount his first visit to Sin City, one is struck more by what Stevens omits from the narrative than what he shares about the trip. He was a U-M student, he says, whose summer job had ended. He had a few weeks to kill before classes started up again, so he and some buddies took a road trip. To Vegas.

“And yeah, I certainly remember my first time.” 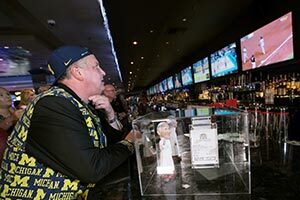 Flash forward 30 years and Stevens is still chuckling and still having a great time. In addition to the D Las Vegas, he owns the city’s original casino, the Golden Gate Hotel & Casino, with his brother, Greg Stevens. Both venues are in historic downtown Las Vegas, off the Strip.

In mid-January, the partners announced plans to build a 777-room casino and resort near their other two properties. Named Circa, the venue will be the area’s first ground-up, new construction project in 40 years. When it opens in late 2020, Circa will host a three-story sportsbook equipped with the largest television display in Las Vegas. Circa’s sportsbook also will feature an in-house broadcast studio created in partnership with sports gaming and media company Vegas Stats and Information Network (VSiN).

“I never really thought I’d be able to get into something like this,” Stevens says. “But I love running businesses. I love growing teams. The opportunity out here to take a small little place like the Golden Gate and grow it, and potentially acquire some other businesses and grow them, that really turns me on.”

Stevens initially was an engineering major at U-M but switched to economics his sophomore year.

“My time in Ann Arbor made me realize I wanted to be involved in the business world,” he says.

Open up those golden gates 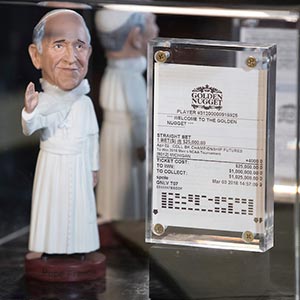 After graduating from Michigan, Stevens joined the family business — an auto supply company founded by his grandfather. He often traveled to Vegas for trade shows and conventions as well as for personal trips. He enjoyed the entertainment and was quick to discover he really enjoyed the sportsbooks.

In 2006, Stevens jumped at the chance to move the family’s investment portfolio, which he was managing, to tax-friendly Nevada. That same year, he and his brother — under the name Desert Rock Enterprises — bought a share of the Golden Gate on Fremont Street.

“That was my first foray into the casino business,” Stevens says. “I had to go through the [casino] licensing procedure for the first time. That’s a pretty interesting experience to go through. They go back decades on your tax returns; it’s very regulated.”

The brothers expanded and renovated the Golden Gate, which has 122 rooms and suites, and started thinking about adding a second casino to the portfolio. As the economy crashed, real estate prices dropped and bargains appeared. In 2011, the Stevens brothers bought Fitzgerald’s on Fremont Street and rebranded it the D Las Vegas.

The venue features 629 rooms and suites and offers some Detroit-themed touches that will delight hometown visitors – an Andiamo Italian Steakhouse and an American Coney Island. The marketing team sells the hotel to Detroit sports fans as their “home away from home” by always showing Tigers, Pistons, Red Wings, Lions, U-M, and MSU games on screens at the famous LONGBAR (literally the longest bar in Nevada). 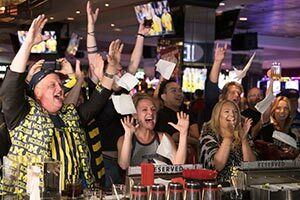 Even though he didn’t win the $1 million, Stevens still had a great time during the 2018 NCAA tournament. (Image:  Sam Morris/Las Vegas News Bureau.)

Stevens compares the renaissance of downtown Las Vegas with what has happened in Detroit. Both cities took massive hits when the economy soured but have experienced a recent resurgence.

But this entrepreneur is not about to let it ride. He constantly stays focused on sustaining success.

“I enjoy running a privately held business, which gives you more flexibility than publicly traded companies,” he says. “Obviously, economics are always changing and it’s our challenge to stay in front of the curve.”

He also was an early, active adopter of Twitter, using the social media platform to generate free buzz.

“When I bought the Golden Gate, it’s not like I had a big budget for advertising so I ended up doing my own PR,” Stevens says. “We had a lot of crazy events, crazy videos, stuff like that. We just try to have a lot of fun out here.”

Given Stevens’ impact on the Fremont Street area over the past decade, it is no wonder a Las Vegas business publication a few years back listed him as one of the most influential people in the city, along with the likes of billionaire casino owners Sheldon Adelson and Steve Wynn, then-Senate Democratic leader Harry Reid, and the then-governor of Nevada.

Another article describes Stevens as a master showman, something he claims is “not my persona at all.”

But he admits as he gets older, he is beginning to acclimate to the flashy environment in Vegas. 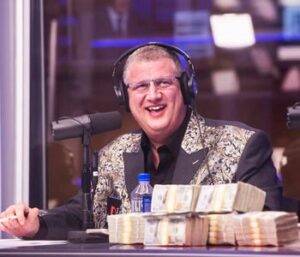 This year, Stevens wagered $100,000 on a special “4 teams vs. the field” prop at the South Point sportsbook. He needs Duke, Gonzaga, Michigan, or Kansas to win the national championship. During a VSiN radio interview, Stevens took odds of +105 from the South Point’s Jimmy Vaccaro. He could win $105,000 if one of those teams takes the title. (Source: gamingtoday.com; image courtesy of Derek Stevens.)

It may be safe to say that March Madness is Stevens’ favorite time of year. As the 2019 NCAA Championship kicks off this month, he reminisces about some of his splashiest bets on college basketball.

Before last year’s tournament, Stevens decided to show some love for his alma mater: He bet $25,000 on the Wolverines to win it all at 40-to-1 odds. If Michigan had cut down the nets in San Antonio (instead of 2018 champion Villanova), Stevens would have won yet another cool $1 million, he says.

Local press caught wind of the 2018 bet and covered Stevens’ antics. For the championship game, he dressed in maize-and-blue striped overalls, a block M-adorned blazer with the sleeves cut off, and a U-M baseball cap on backward. He watched the game at the LONGBAR with the betting slip and a figurine of Pope Francis on the bar under a glass box.

“I like to make a wager when I think we’re getting good value,” Stevens says. “And on some of the wagers with MSU and Michigan, there’s a little bit of a bonus if you have a good story to go with it.”

Now he’s making news with his 2019 bet. According to the website gamingtoday.com, Stevens has wagered $100,000 on a special “4 teams vs. the field” prop at the South Point. He needs Duke, Gonzaga, Michigan, or Kansas to win the national championship. During a VSiN radio interview, Stevens took odds of +105 from the South Point’s Jimmy Vaccaro, the site reports. “Stevens will win $105,000 if any of those four teams cuts down the nets.”

Host with the most

Stevens visits the Detroit-area occasionally to see family and get back to the Big House and Zingerman’s. But he says the beauty of Las Vegas is that people are happy to travel there to see him. Some weekends there might be 20 different groups he knows staying in his hotels.

“I feel very lucky that this is a part of my business,” he says.

Stevens laughs that maybe all those nights spent at Good Time Charley’s tending bar groomed him for his current line of work.

“I designed a place where I want to hang out,” he says. “When I’m done with work, I go down to the LONGBAR or one of our other bars and I can hang out for hours talking to customers.


(Top image: Derek Stevens, CEO and co-owner of the D Las Vegas, reacts along with his wife, Nicole, while watching Michigan take on Loyola in the Final Four in March 2018. Stevens had placed a $25,000 bet on Michigan to win the NCAA basketball tournament. Image: Sam Morris/Las Vegas News Bureau.) 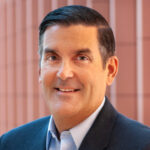