A (tiny) face in the crowd 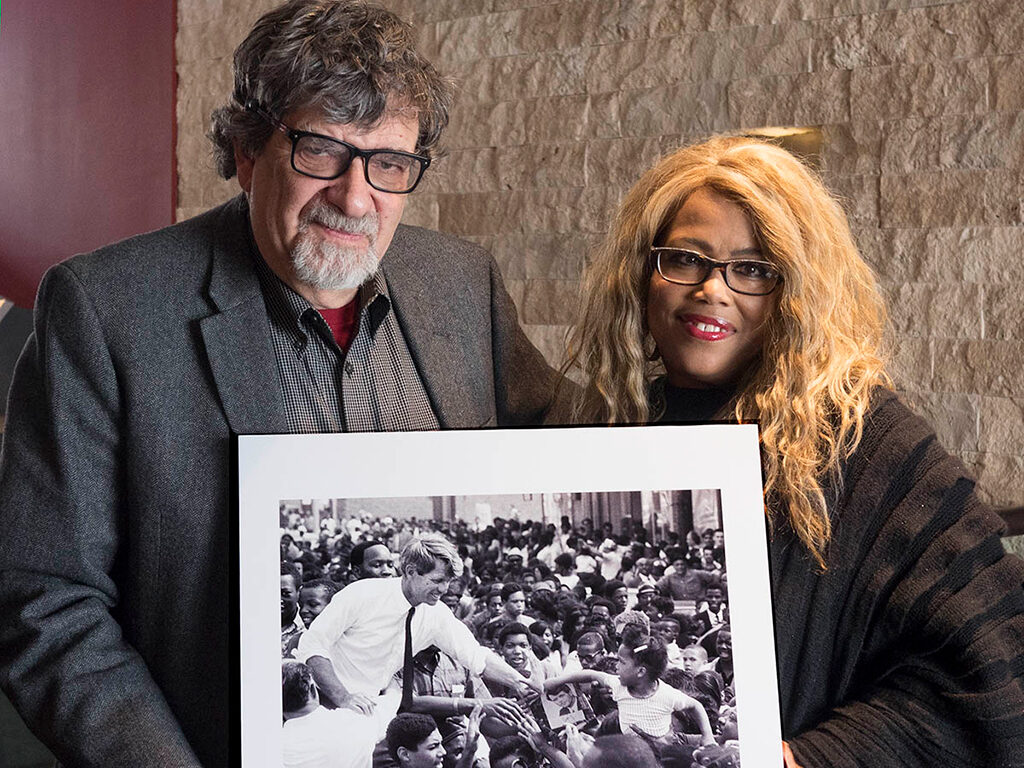 A moment in time

In May 1968, U-M student Andy Sacks, AD ’69, joined a motorcade covering the aspiring presidential candidate Robert F. Kennedy on a tour of Detroit. Sacks, barely 20, understood he was chronicling history. But he was there to make pictures for The Michigan Daily. And he wanted something good. 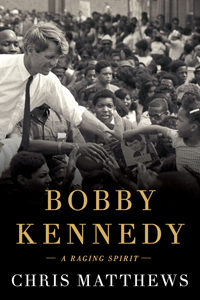 Well, he got something extraordinary. So extraordinary that 50 years later, Simon & Schuster put his picture on the cover of the 2017 biography Bobby Kennedy: A Raging Spirit by Chris Matthews. Sadly for Sacks, about 250,000 units of the book were sold with the wrong photographer’s credit on the cover image. (But that’s another story.)

The publisher has since apologized for what it calls an “honest mistake.” But that’s it. Sacks’ only compensation to date is $250, his take of the $500 fee Getty Images charged when they sold his photo to Simon & Schuster. Softcover books bear Sacks’ credit now. But that’s small comfort to an artist who was robbed of the claim to his own work.

Sacks has been pursuing legal action (and gnashing his teeth) ever since.

And then one day he got a message. A Michigan Medicine registered nurse named Sybil Martin had called. She knew this was a strange question but she had to ask: Did he take a photo in the ’60s on the crowded streets of Detroit of a tiny African American girl, hoisted high in the air and locking eyes with Robert F. Kennedy?

Sacks was stunned. He knew this photo only too well.

“Since the time I started photographing for my high school newspaper in the ’60s, the images of thousands and thousands of people have passed through the lenses of my cameras,” he says. “This one I won’t forget.”

One day in Detroit 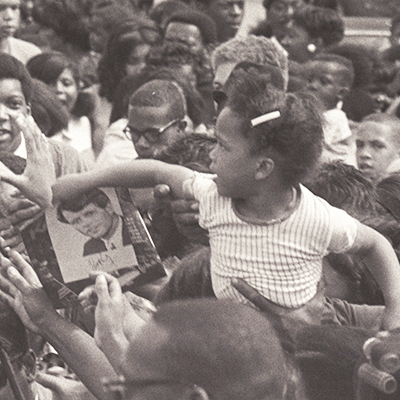 Sybil (Turner) Martin was going on 5 years old that spring day when her dad drove her and her siblings to see Bobby Kennedy in Detroit. They found a spot in their old neighborhood, near the epicenter of the 1967 riots that had rocked the city less than a year prior. But Martin has no memory of being afraid, despite the surging throng at the intersection near 12th and Clairmount streets.

She can still hear the noise produced by Kennedy’s joyous supporters. “But it wasn’t chaotic,” she recalls. “My dad would have backed away from that. He would never have put us in danger.”

Her father wasn’t political, but he must have felt some affinity for Kennedy to take her, her sister, and her brother to experience the open-air motorcade, Martin says. Her mother must have stayed behind on this particular day. Martin remembers this because she was a hair twirler as a little girl. To keep things under control, her mother would twist a braid on top of her head and clip it down with a barrette. “And I remember being in the car thinking, ‘Oh, my mom is gonna be ticked because I messed up my hair.’”

As they waited for Kennedy, her brother clutched her father’s pant leg. Her sister was close by, seemingly the only girl in a sea of young boys. Martin, tiny for her age, perched on her father’s hip, then his shoulders, for an ideal vantage point. When the motorcade approached, her father’s friend thrust the child upward just as Sacks’ shutter snapped open, then shut. This single moment, which may have lasted about 250ths of a second, has left an indelible imprint that still resonates.

“I can remember [Kennedy’s] face and his smile just as if I am looking at a person today,” says Martin, now 55. “At 5 years old, what stood out the most to me were his teeth, from his smile and his eyes — so kind. He was a super good-looking guy, and I always remember that. And I remember shaking his hand.

Martin says she has three vivid memories of her early childhood: At about 2, she was caught sitting on the kitchen floor eating butter. When she was 4 or 5, she says, the family had a monkey for a pet. And then, she shook RFK’s hand.

Over the years, Martin shared the story with a handful of friends, but she had no idea a photo of the moment existed, let alone that it now appears on the cover of a bestseller. The Turner family would recount the tale now and then, but it wasn’t until high school that she truly understood Kennedy’s legacy and the significance of that day in Detroit. RFK was assassinated just three weeks later in Los Angeles.

“I still have [RFK’s] face in my brain — that’s the weird thing,” Martin says. “Out of all the people on earth and all the pictures . . . And here it is.”
A documentary about RFK inspired her brother to research the dates the politician had visited Detroit, and he discovered the image of his sister online. The moment offered sweet vindication: Whenever he’d told people that his baby sister shook the icon’s hand back in 1968, they usually rolled their eyes, Martin says.

“He called me up and said, ‘Sybil, your picture is on the Internet!” she says. “He was just so happy to have proof. He just kept saying, ‘I knew it! I knew it!’”

And then Martin thought, “Wait, who took this picture?”

More googling turned up Sacks and his website. After Martin and Sacks spoke on the phone, they met at Weber’s Inn in Ann Arbor (along with Martin’s brother and Sacks’ wife). Sacks presented Martin with a signed print and a copy of Matthews’ book. She decided to hang the print in the hallway of her house, so people will see it when they exit the bathroom.

“Every time I look at it, it blows my mind,” she says. “You’re on the cover of a book. I’m like, ‘OK, this is very interesting.’ I think I’m in shock. But it’s great. I guess I should go to bookstores more often.”

At first, Sacks wasn’t convinced Turner was the person she claimed to be on the phone.

“And then, about five or 10 minutes into the conversation, she mentioned the barrette,” he says. “For me, that was enough testimony to validate her claim.”

The more Martin studies the image, the more she discovers. Her brother thinks he can see her father behind Kennedy. She can see her sister, now deceased, her mouth open in excitement. “She was a feisty one,” Martin says fondly. “If she were alive, she’d be like, ‘Call Geoffrey Fieger!’ We’re getting some money for this!”

Sacks laughs when he hears the anecdote. He’s not holding his breath for any payout from the publisher or anyone else, barring a miracle (or a project undertaken by Michigan Law, he hints). He and his attorney, Stephen Selbst, also an alum of The Michigan Daily, continue to fight Simon & Schuster, but further legal action requires filing an expensive suit in the notorious Southern District of New York. Author Matthews, meanwhile, has never acknowledged the egregious error. 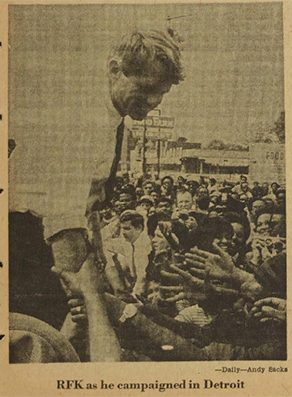 This image ran in The Michigan Daily in 1968, with Sacks’ credit. (Michigan Daily archives via U-M’s Bentley Historical Library.)

“My photograph of her and Bobby Kennedy is a striking image,” he says. “But now, after reconnecting with that little girl in the frame 51 years later, that photo to me captures a moment of grace — right there at the corner of Clairmount and 12th Street, in the middle of that chaotic parade.”

The two people at the heart of the photo are vastly different in age, background, life ambitions. A teeming crowd surrounds them as they reach out to touch one another – a pose akin to Michelangelo’s “Creation of Adam.”

“And then, boom: 50 years later, that girl finds herself on the cover of a best-selling biography,” Sacks says. Even he is amazed by this delightful turn of events. “It was so gratifying to hear from her. We had always wondered, ‘Who is that little girl?’”

Sacks continues to glean profundity from the image all these years later.

“Bobby Kennedy was the father of 11 kids,” he says. “As the father of girls myself, I think Kennedy looked at the crowd that day and didn’t see color. He saw children, all of our children.”