The doctor and Ty Cobb 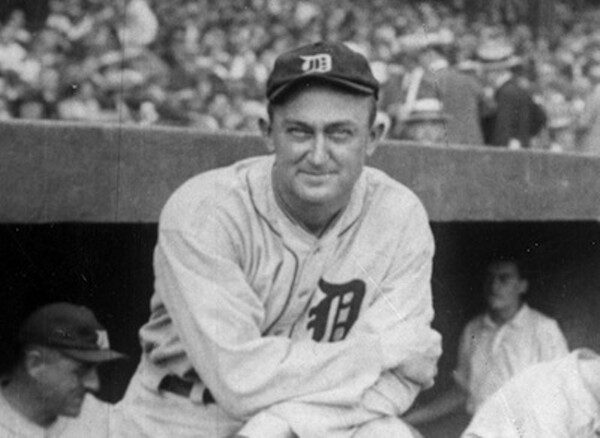 A man of letters

Ty Cobb, the greatest Detroit Tiger and still seen by many as the greatest all-around ballplayer ever, has also gone down in history as the most dangerous. 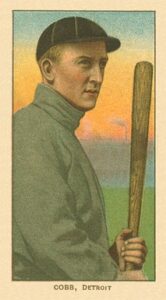 The asking price on this vintage Ty Cobb baseball card is nearly $300,000. You can find it at oldsportscard.com.

It was said that he sharpened his metal spikes to draw blood from opposing infielders. He slapped around a black groundskeeper for the crime of patting Cobb on the shoulder. He once lunged into a grandstand to pummel a disabled fan who had cat-called the star with racist taunts — the sort of insult that Cobb, the Georgia-born son of a Confederate veteran, would never let pass unpunished.

Tales like these have been debated by pro-Cobb and anti-Cobb biographers ever since the Hall-of-Famer (the first Hall-of-Famer) died in 1961. Many were first spilled by a sportswriter named Al Stump, who collaborated with Cobb on his autobiography, My Life in Baseball: The True Record — then, after Cobb’s death, dumped all Cobb’s dirt in magazine articles and a biography. Stump even claimed that Cobb had confessed to killing a man in a back alley in Detroit.

That is the image of sports legend engrained in popular culture by the 1994 biopic Cobb, starring Tommy Lee Jones in the role of an elderly Cobb telling his dark truths to Stump — a wife-beating, egomaniacal, vicious drunk.

In more recent years, defenders have debunked some of the darkest claims and downplayed others, arguing that the real Cobb, while hardly a saint, was not the demon portrayed by Stump and Jones.

All of which makes it fascinating to review nine letters held in the University’s Bentley Historical Library. They are chatty missives handwritten in green ink from 1948-52 by an aging Cobb to an old friend in Detroit, Dr. Charles Kennedy, who was a U-M regent from 1946-61.

The Cobb of these letters is friendly and generous, not angry or vindictive toward his detractors. Several letters deal with Cobb’s extensive philanthropic activities, including the endowment of a hospital in his home town of Royston, Ga., and a scholarship fund for needy Georgia students. 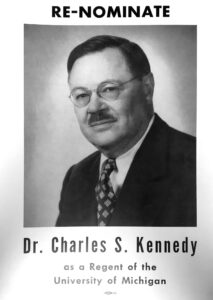 Dr. Kennedy was born in 1887 (a year after Cobb) and raised in Detroit’s Irish-American Corktown neighborhood, mere blocks from the corner of Michigan and Trumbull, where Cobb’s Tigers would play beginning in 1912. Kennedy earned a BS at Michigan in 1911, then his MD from the Medical School in 1913. He was a surgeon at Detroit’s Grace Hospital for many years and taught at both Wayne State and U-M. He was known for his Republican political views, his booming voice, and his deep, rumbling laugh.

How Kennedy and Cobb became friends isn’t clear from either the letters at the Bentley or the standard Cobb biographies. The star once remarked that he wished he had been a doctor instead of a ballplayer. So maybe he saw an alter ego in Kennedy. The surgeon’s obituary says only that Cobb “never failed to call on Dr. Kennedy on a Detroit visit and was likely to call him up in the middle of the night from anywhere to ‘chew the fat.’”

That captures the tone of Cobb’s letters, which ramble through the usual concerns of a well-do-do retiree. A southerner by heritage and a Detroiter only by profession, Cobb split his prosperous later years — he had invested his baseball earnings very wisely — between northern California, Nevada, Idaho, and Georgia. He tells Kennedy about his health; his travels and vacations; his charitable activities; and mutual friends. 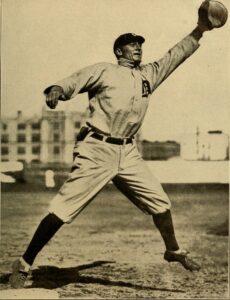 Cobb’s antics on and off the field made for colorful commentary. (Wikipedia.)

There are occasional glimpses of Cobb’s undimmed celebrity status long after his retirement from baseball in 1928, such as when New York’s famous restaurateur-to-the-stars, Toots Shor, secured tickets to the smash Broadway hit “South Pacific” for Cobb and his wife. The Cobbs couldn’t use the tickets, so they went to another baseball legend.

…we had made plans to leave [New York], had plane tickets, etc. and [Shor] had them for two nights later, they came from one of the owners of the show and Joe DiMaggio had come into town so he enjoyed the show with our tickets.

I was glad to see Michigan dominance over Southern California, these people out here think they are more or less dominant in athletics and they gloat so about it, it’s good to see them get their ears pinned back.

He had the usual preoccupations with health habits:

I am feeling fine, reduced in 3 weeks 16 lbs. eating things that don’t fatten also taking not even beer… Blood pressure 120 over 70 yesterday. Doctor said I was a boy.

But baseball was seldom more than an afterthought. In a letter written in June 1950, Cobb goes on for pages about travels, families, and fishing before he comments on that summer’s American League pennant race, apparently in response to Dr. Kennedy’s query: 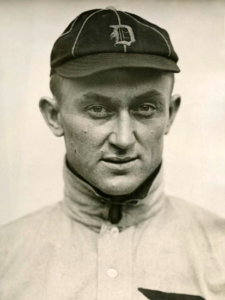 I think Detroit [led by four All-Stars, including Hal Newhouser and George Kell] has the best chance to win this year, they have the best pitching staff and they have the offense and as good defense as any. New York I don’t think can do it…

And in 1951 Cobb confided his plans to help an old Tiger teammate and friend get into baseball’s Hall of Fame — a footnote to a famous incident in Hall of Fame history.

Confidentially I am starting now to try to get Harry Heilmann in Hall of Fame though I think he will go in this coming election but one cannot be sure and to try every way is to play it right.

When Heilmann was on his deathbed later that year, Cobb told him he had been elected to the Hall when in fact he had not been. Instead he was inducted the following year.

Cobb died 10 years later of a combination of diabetes and cancer, rich and still renowned. Dr. Kennedy, interviewed by a Detroit reporter, remarked on Cobb’s devotion to the students he had helped through his Georgia scholarship fund.

“I’ve watched his eyes glow when he read letters from those students,” Kennedy said. “He was as proud of their accomplishments as if they were his own children. When you’d see him then, you never could visualize him as the man who challenged umpire Billy Evans under the stands, fought Buck Herzog and others, and carried spike wounds from his toes to his hips.”